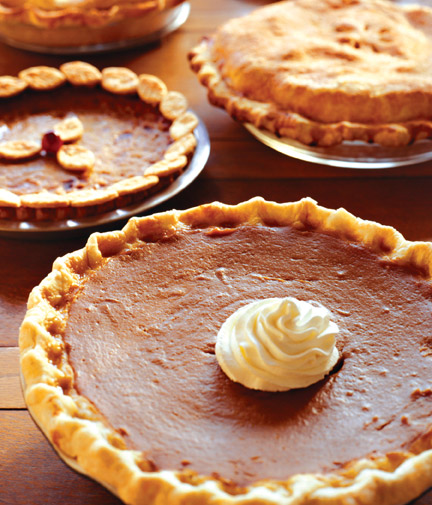 Pumpkin pie has long been de rigueur at Thanksgiving. But we’ve come a long way from the Betty Crocker cookbook, prompting us to ponder the fate of the classic dessert this holiday season. Are local restaurants sticking to tradition or putting a new pirouette on pumpkin?

Bella Bru Cafe (multiple locations) Traditional pumpkin is what most people want, says pastry chef Chris Pacheco, who sticks to the basics but may bump up the cinnamon a little. Other than that, he says, it’s all about the crust.

Table 260 (Elk Grove) Sizzlin’ apple crumble with pumpkin ice cream is chef/owner Ray Smith’s paean to pumpkin. He serves it hot in a skillet, with caramel sauce and a sprinkle of cinnamon on top. Smith expects people will go as crazy over this creation as the one that inspired it: cinnamon apple crisp, on his regular menu.

Tower Cafe (Sacramento) Pastry chef Louise Maestretti adds a touch of whiskey to her otherwise traditional pumpkin pie. I’m not sure it really makes a difference, she admits. But it’s my grandmother’s recipe. Also on the menu: pumpkin cheesecake with a brown sugar-sour cream topping.

Zinfandel Grille (Folsom and Gold River locations) Pumpkin spice cheesecake with a caramel bourbon sauce takes the place of pumpkin pie, says chef Matthew Jones. But the filling is basically the same ingredients as pumpkin pie&emdash;except for the cream cheese.