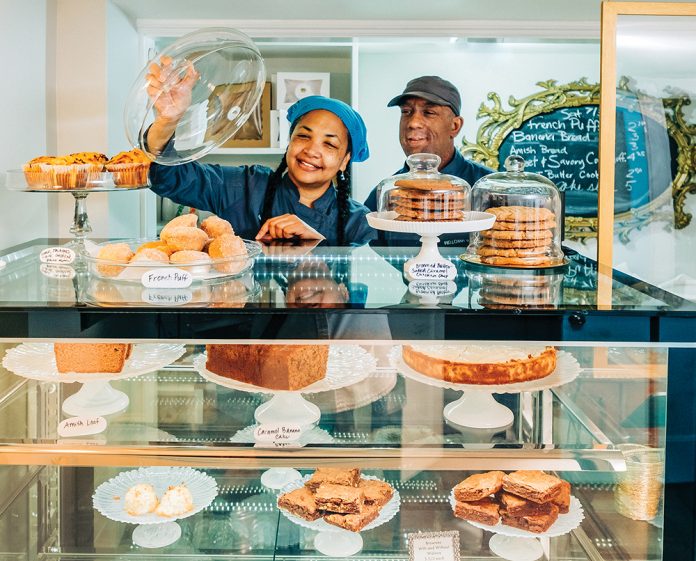 When it came to doling out career advice, Angela Harris instructed her two children to find their passion and the money would come. It was ironic, given that Harris herself had focused on getting a job that paid well; loving her work came last. But all that changed during the pandemic. That’s when, at her kids’ urging, Harris decided to follow her heart and open a bakery in midtown Sacramento.

Fittingly named Midtown Bakery, her pocket-sized shop (open since late March) is a passion project for Harris. During the week, she holds down a full-time job as a director of clinic operations for a community health clinic. But on weekends, she rises at 2 in the morning and heads to the bakery to prep ingredients and bake all the cookies, muffins, cakes and pies for sale later that day. Her husband, Thomas, an artist with a side gig in construction, helps.

The shop is open Saturday and Sunday only, from 8 a.m. till 2 p.m. And if you don’t get there bright and early, you may miss out on some of Harris’ most popular goods, like the French puff, a butter muffin rolled in cinnamon sugar; banana cake, made with walnuts and caramel; or Amish loaf, a tender, cinnamon-tinged coffeecake with a crunchy sugar top. When the store sells out, Harris simply closes early.

During the week, when she’s not at her regular job, Harris does R&D for the bakery, trying out new things to add to the menu. An experimental cinnamon roll and a vegan blueberry muffin both made the cut. A bacon-potato torte recently got a tryout; pizza may come next. Family and friends act as initial testers, but the real deciders are Harris’ customers. She’ll put something new in the case and watch to see if it sells.

The shop flies a bit under the radar. Although the bakery has a J Street address, its entrance is actually on 23rd Street. There’s no signage or storefront window, so you have to know what you’re looking for—or be lucky enough to stumble upon it while strolling around midtown. You duck into a Hobbit-sized side door and enter a tiny space, no bigger than 200 square feet. (Behind a door are a kitchen, office and storage space that you can’t see.) Baked goods are displayed in one tiny bakery case and on a few shelves. An oval chalkboard in a gilt frame lists the day’s offerings.

Midtown Bakery is just one of several sweet spots concentrated in a few blocks in midtown. Ginger Elizabeth Patisserie, Babes Ice Cream & Donuts, Rick’s Dessert Diner and Icing on the Cupcake shop are all located on J Street a short walk from the bakery. Harris set herself apart from the competition by choosing a distinct niche for her business: tightly curated classic American desserts like carrot cake, lemon meringue pie and peanut butter cookies. “That’s something I learned in my executive MBA program, which focused on entrepreneurship,” she explains. “There’s nothing new to be invented. It’s the experience you give your customers that matters.”

Keeping the business small and manageable is another point of difference. Harris doesn’t have employees; she and her husband do it all, from shopping for ingredients to manning the cash register. It allows them to have a connection with their customers. “Thomas and I take our time,” Harris says. “We don’t try to rush into anything. We’ve intentionally ramped up slowly. We’re trying to figure out what people like and what hours work. It’s worked pretty well for us.”

As a child, Harris learned to bake from her mother, and she has since taught herself more by watching pastry chefs and bakers on YouTube and following recipes from online sites such as Food52. As someone who used to bake for her sweets-loving family, she now gets to create baked goods on a bigger scale for a wider audience. “It’s my passion,” she says. “I love the joy it brings people.”