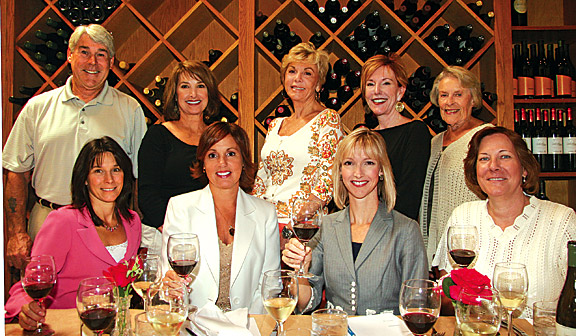 Benefiting organizations: Wellspring Women’s Center, a drop-in center for low-income women and their children, and Works in New Directions, or WIND, a haven for homeless teens

Menu: Seasonable; the lunch menu showed a variety and imagination not often found at a trattoria.

Extras: Janie Desmond Ison, who owns Cafe Vinoteca with her husband, Jim, stopped to chat after helping out in the kitchen. (She’s a member of the Desmond family, which has been in Sacramento forever.) Sylvia Miller provided professional service, making sure plates and tableware were removed and replaced at appropriate times. While raising a glass of Saintbury Chardonnay for a toast, Diva Bernice Hagen knocked over a glass of La Crema Pinot Noir. It was one time when the paper covering the tablecloth was appropriate.

Ambiance: Casual and comfortable for a single diner or a congenial group.

Quote of the day: I baked bread in Arizona, said Diva Gayla Mace. Believe it or not.

Chatter: When it came time to decide their futures, Nina and Jim Davis flipped a coin. Who won? You decide: She works, he stays home in Colfax, growing vegetables and cooking. Their daughter has launched her post-high-school studies at Sierra College. Wendy Duer noted that her 3-year-old son can be a challenge: He approaches the world two-handed, with something in each hand. Lila Wallrich’s teenage daughter can tell who’s wearing Hanky Panky underwear because the lace band shows. What’s Hanky Panky? Said Diva Bernice Hagen: I will show you. OK, I won’t look, said Jim Davis, covering his ears with his hands.

The Dining Divas&emdash;Gloria Glyer, Paulette Bruce, Bernice Hagen, Joan Leineke, Gayla Mace and Peg Tomlinson-Poswall&emdash;have been wining and dining together since 1993. Every month, they lunch at an area restaurant, taking as their guests people who have placed winning bids at charity events. To date, they have raised more than $268,000 for local charities and nonprofits.