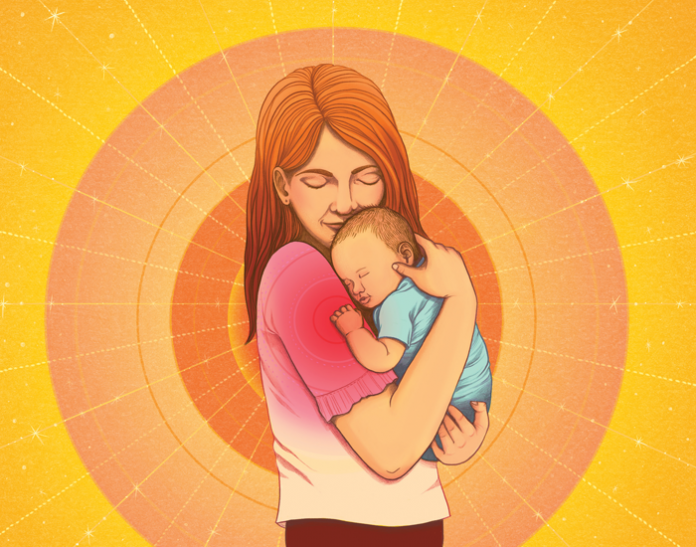 A mother’s love for her adopted son has nothing to do with DNA.

The second thing out of my mouth after I gave birth to my oldest son was to declare that he looked like his cousin, Gabe. It was in the shape of his mouth, instantly familiar. As friends and family visited in the first days and months of his life, from my bedside at UC Davis Medical Center to our tiny Oak Park home, everyone had their own opinion, too. The consensus was split—some people saw me in his eyes and some people saw my husband in his mouth—but everyone weighed in. It’s what you do when you meet a new baby, apparently.

I’m not sure if it’s just small talk like discussing the weather, or a cultural tradition we participate in out of training or habit; if it’s meant to be some sort of compliment or if we’re all just really that curious about it, but the minute a baby is born it seems we all want to determine who he looks like.

My second son came by way of adoption through the Sacramento County foster system, and other than being white, he didn’t really look anything like us. He was 13 days old and just over 4 pounds when we met him in the NICU at Sutter Memorial, safely surrendered by a Jane Doe whom we know almost nothing about. He was scrawny and bug-eyed with a head full of fuzzy little baby hair that looked like maybe he’d have a mop of curls one day. But there was no way to know who he really looked like, not a single blood relative to compare him to, not a photo or an anecdote or a story about a cousin with a familiar face.

Yet still people weighed in. Strangers declared he looked like his brother, or like his dad, or like me. Maybe they really did see some sort of resemblance, some faint likeness buried in the twitch of an eyebrow or the fold of his skin that only a determined examiner could make a case for. It often felt like an attempt at a compliment, like if he looked just like me I must have strong genes. Or maybe it’s just a thing to say, a meaningless remark meant as a passing pleasantry. Who knows? I usually just smiled, uninterested in discussing my son’s adoption in the checkout lane at Save Mart and never quite sure if the friendly stranger actually believed their own declaration. Sometimes I’d awkwardly offer up a shrug that was probably just as confusing as the comment itself. Like so many parts of motherhood, I didn’t have a script to work from; I didn’t know the right response.

He’s 5 now, and people seem less compelled to declare which relative a preschooler resembles than they do with an infant. There are easier conversation starters now: How old is he, what grade is he in, what’s his teacher’s name, what’s his favorite toy, and so on. But the need to weigh in on who he might take after still lingers for some.

It’s even stranger now, usually coming after learning he is adopted. The fact that he is adopted surprises most people, which I guess is to be expected. Their initial response is usually something along the lines of, “Oh! Wow! I had no idea.” Frequently, this is followed by, “He looks like he could be related to you,” or “He looks just like you guys.” At 5, he looks even less like my husband or me than he did as an infant, in my opinion, and all my uncertainty about what really motivates the comments still applies. I still don’t have a script. I still don’t know the right response.

I’ve come to wonder if declaring that a child resembles his adoptive parents is meant to reassure the parents that their family looks “normal,” legit. Like if we look like we belong together, it’s a sign that we really do belong together. And I wonder if the desire to offer that reassurance stems from the fear that a lot of people have—a fear that probably precedes most adoption stories in some form—that it is harder to feel connected to an adopted child than one who shares your DNA. I wonder if these sweet strangers might have this fear, or if they assume I’ve had my share of it, and they are doing their best to quiet it, both for me and for themselves.

It is unnecessary, though, this attempt at reassurance. What my son looks like has nothing to do with what makes him mine.

When he was 4 months old and still technically our foster child (the adoption wouldn’t be finalized for another two months), he got very sick with RSV, a common respiratory virus. After days of monitoring what we thought was a cold, we eventually took him to the pediatrician, who ran some tests and told us to proceed directly to the hospital. The oxygen levels in his blood were low and he needed assistance with his breathing, stat.

My husband and I scrambled to figure out who would take the baby to the hospital and who would stay with our 2-year-old. I called a new friend who lived close to the hospital. The wife of a surgical resident at UC Davis, she was probably no stranger to urgent phone calls about trips to the ER. We didn’t know each very well but I was harried and desperate, and desperate mothers make awkward phone calls. Ten minutes later, I was dropping my toddler off at her house without a diaper bag or any idea of what the next few hours might look like. She was understanding and reassuring, and as I hurried off to meet my husband at the hospital, I was equal parts embarrassed for inconveniencing this new friend and grateful for the motherhood code of dropping everything to help out a fellow mother in need.

When I arrived at the ER, a doctor was just greeting my husband, who was holding our whimpering baby on a triage bed surrounded by curtains. There would need to be a blood draw, so I wrapped my arms tight around my baby while a young doctor stuck him with a needle and he screamed that terrible, bloodcurdling scream until no more sound came out. I begged the doctor to hurry up, make it stop, please please give this baby a break.

I spent the next two nights sleeping in the chair beside his hospital crib while he received supplemental oxygen and intravenous medicines I can’t remember the names of. On the morning we would be discharged, a Sacramento County social worker came in with a clipboard asking to see my I.D. She was friendly and I was prepared, producing my I.D. as well as our foster care licensing paperwork so she could check all her boxes.

“I can’t imagine this is a common form of fraud,” I joked, “people voluntarily spending two days at a hospital bedside worried sick about a baby who isn’t theirs.” She laughed, and we moved through the paces of satisfying her clipboard and gushing over the baby.

He is mine because when he gets sick, every cell in my body wants to make him well.

He is mine because when he hurts, I hurt.

He is mine because there is no phone call too awkward for me to make on his behalf.

He is mine because I know the difference between his usual laugh and his belly laugh, and it is physically impossible for me not to smile when I hear the latter.

He is mine because I know that when he is at his worst, the kind of discipline that works for his brother will only push him farther over the edge. He needs my softest approach, an embrace to neutralize his rage.

He is mine because I lie awake at night worrying about all the ways I’m messing him up.

He is mine because when he’s tired enough to lay his head on my chest, I am flooded with the feeling that the love I have for him is somehow strong enough to cover the multitude of my mistakes.