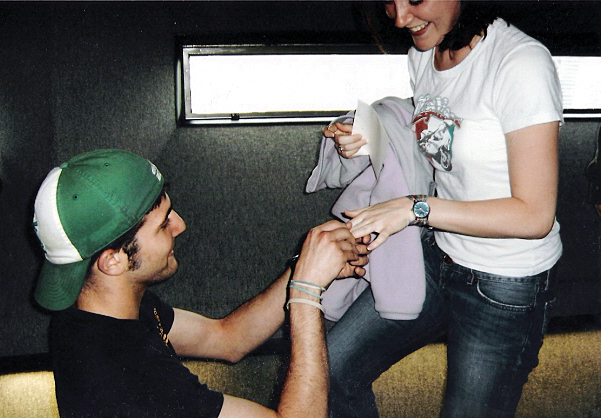 How-we-got-engaged stories are like snowflakes: No two are exactly alike. We asked a few local couples to tell us how it all went down when they decided to tie the knot. Carpe Diem
It was 2007, and Patrick Mulvaney and Bobbin Cherrington were feeling exceedingly fortunate. Three years earlier, after a lot of hard work and many delays, they had opened a restaurant: Mulvaney’s Building & Loan. Now, the restaurant was a big success.
But in March, their luck turned when Cherrington—the restaurant’s marketing manager, a catering manager and Mulvaney’s girlfriend—was diagnosed with Stage III cancer. For the next six months, she was in a fight for her life. She spent much of her time in bed, hooked up to chemo 24 hours a day.
Worried about the toll on Mulvaney of running a busy restaurant while caring for Cherrington, friends urged him to take a break. So he headed to the East Coast for a long weekend. While he was in Boston for a Red Sox game, he learned his father had suffered a stroke.
Mulvaney rushed to New York to be with his dad. That’s when he realized that life is short. “I decided I wanted to spend the rest of my life with Bobbin,” he says.
It was late at night when Mulvaney arrived home. “I brought you something,” he said, digging through his duffle bag. “He usually brings me back some lovely treasure from the airport,” says Cherrington, expecting a pair of I (Heart) New York pajamas or a musical key chain that plays “Take Me Out to the Ballgame.” She told him she could wait until the morning for her gag gift, and they got into bed. As they lay together, Mulvaney murmured, “I don’t want to live my life without you. Will you marry me?” Cherrington opened her eyes and saw his grandmother’s 1924 Tiffany ring, still in its original box.
Twice that night, Cherrington climbed out of bed to turn on the light and look at the ring. “I was in a total chemo haze, and I wanted to make sure I wasn’t hallucinating,” she recalls.
On Nov. 9, 2008, they blocked off the street in front of Mulvaney’s Building & Loan and were married with hundreds of friends in attendance. “And we are living happily ever after,” says Cherrington (now known as Bobbin Mulvaney). Leaving Nothing to Chance
Midtown resident David Shapiro lives by the Boy Scout motto: Be prepared.
It was 2006, and Shapiro and his girlfriend, Megan Miller—both seniors at the University of Missouri in Columbia, Mo.—were planning a future together. Shapiro had asked Miller what kind of proposal she wanted: a romantic proposal or one that would make a good story. A good story, she said.
So Shapiro concocted an elaborate scheme that required weeks of planning to pull off. He wanted to propose at the top of the landmark Gateway Arch in St. Louis, a two-hour drive from Columbia. But anybody can do that, he figured. To make his proposal a “good story,” he decided to get Miller to the top of the arch and ask for her hand via a sign on the ground, nearly 700 feet below.
His first concern: making sure the sign was big enough to be seen. So he borrowed an engineer’s distance measuring wheel and measured 700 feet. Since from that distance he could clearly see a parked van, he figured the sign’s letters had to be at least as tall as a van. To be extra sure, Shapiro called Miller’s eye doctor and confirmed that she was capable of reading a sign that far away. Then he got 11 twin-size bed sheets, sewed them together and painted the words “Megan, will you marry me?” in giant, van-sized letters.
Now he had to get his girlfriend to the top of the arch without her suspecting a thing. So he arranged for her boss at the restaurant where she worked to send her to Gateway Arch on a catering job. Miller called her boyfriend and asked him to come along for the four-hour round trip. (“I knew she would,” he says.) In the meantime, Shapiro had lined up a group of friends to drive the sign to St. Louis, bring it to the arch and stake it to the ground.
The pair arrived at the arch and took a tram to the top. Once they exited the tram, Miller set off to find her mythical catering customer. Shapiro, meanwhile, was getting nervous. The observation area was filled with tourists, who were looking out the window and murmuring, “Who’s Megan?”
Shapiro handed his camera to an archway staffer and told his girlfriend to look out the window. She brushed him off, intent on making her delivery. So Shapiro steered her to a window and forced her to look. On the ground, nearly 700 feet below, was the sign.
Shapiro got down on both knees—“because I hadn’t practiced that part,” he says—and someone in the crowd shouted, “What’s your answer?” Shapiro heard the reply that validated his weeks of planning. “Yes!” shouted Miller.
The couple were married on June 2, 2007. Miller, who attended McGeorge School of Law, is now an attorney. And Shapiro, an aspiring actor, recently went into business as an engagement consultant, helping other guys with their own elaborate proposals. His boast: “No one’s ever said ‘no’ to the proposal when I’m involved!” A Proposal on the Run
A decade ago, Sacramento Police Chief Rick Braziel was dating a physician named Karen Paddock. Instead of going out to dinner and the movies, the athletic pair loved to run and bicycle together. “Our dates were workouts,” says Braziel.
In 1998, they completed a triathlon in Pacific Grove. The following year, Braziel decided it was time to make their relationship official. Wouldn’t it be fun, he thought, to return to Pacific Grove—and propose in the middle of that year’s triathlon?
It was Sept. 11, 1999. They each had completed the triathlon’s first two events—a 1.5K swim and 40K bike ride—and were in the last leg of the race: a 10K run. Finishing ahead of his girlfriend, Braziel doubled back and ran alongside Paddock. “Hey, you’re kinda cute,” he said flirtatiously. “You married?”
“No,” she answered, panting with exertion.
“What’s up with that?” he asked.
According to Braziel, her response was unprintable.
By this point, Paddock was struggling to finish the race and was in no mood for small talk.
“Will you marry me?” Braziel asked, still running alongside her.
“Yeah, right,” she said shortly. “Whatever.”
“Give me your hand,” Braziel demanded, slipping an engagement ring on her finger. At that, Paddock threw her hands up in the air, screamed, “Yes, Rick Braziel, I’ll marry you!” and sprinted like a madwoman to the finish line. “I should have asked her earlier in the race,” says Braziel today. “Her time would have been better.”
The couple married in July 2000. The French Fakeout
Like many couples, Oleg Kaganovich and Margaret Teichert knew they were destined to marry long before they were officially engaged. But Kaganovich, a Sacramento venture capitalist, wanted his 2001 proposal to Teichert, a marketing manager and artist, to include the element of surprise.
As Christmas loomed, Teichert assumed a ring was coming her way. But Dec. 25 came and went without a rock. Instead, Kaganovich promised to give her a special gift later that month, during a trip they were planning to Paris.
The pair were in their French hotel room on New Year’s Eve, getting ready for dinner, when Kaganovich presented her with the long-awaited gift. Teichert tore the package open and was crestfallen to find a silver bracelet, not the diamond ring she was expecting. “I was so disappointed,” she recalls.
Over dinner, Teichert drank glass after glass of Champagne as she tried to swallow her disappointment. After ringing in the New Year, the pair left the restaurant and set off on foot for their hotel. It was bitterly cold as they crossed Pont Royale, a bridge between the Louvre and the Musée d’Orsay. Suddenly, Kaganovich stopped, pulled out a ring and, teeth chattering, asked Teichert to be his wife. Teichert was so surprised, she flung her scarf into the Seine.
On May 25, 2003, the couple married at the Crocker Art Museum in front of 250 guests. Today, they are the parents of 17-month-old Benjamin.