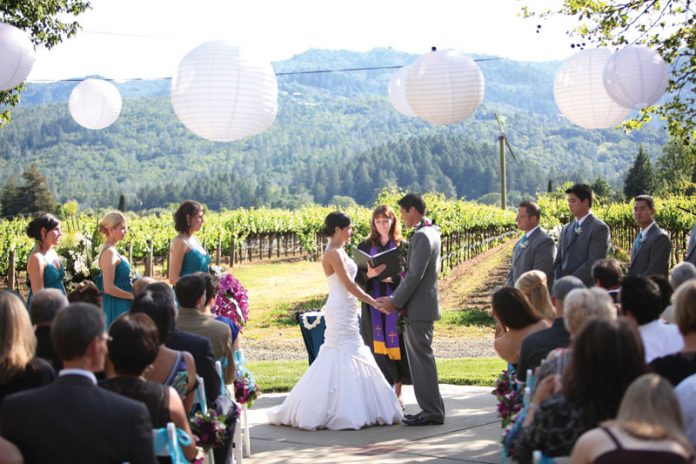 When it came time to say “I do,” these three couples did it their way.

To say that the traditional wedding went out with June Cleaver’s pearls is only partly accurate. Sure, we’re no longer seeing as many pastel bridesmaids’ dresses with dyed-to-match satin pumps. Pachelbel’s “Canon in D” is just as likely these days to be ousted by rap or rock ’n’ roll. Even the traditional bouquet toss is on the endangered-species list.

Yet much of what makes a wedding a wedding is still intact.

“All the elements of what goes into a traditional wedding I believe are still there,” says longtime wedding planner Lora Ward, owner of A Day to Remember in Sacramento. “You marry in front of an assembly of people, you feed your guests, and you celebrate and dance.”

How couples execute those steps is what separates them from the pack.

“The idea of creating a theme and bringing out the perspectives of the bride and groom is much more pronounced these days,” says Ward. “There’s so much more color, more bells and whistles, more interaction. It’s not your mother’s wedding anymore.”

El Dorado Hills-based wedding and event designer Debra Hiebert, owner of Très Fabu, agrees. “The modern tradition is to make the wedding completely representative and reflective of that couple, making it more them,” she says.

Aloha From Napa
The Napa Valley evokes images of Tuscany, the Mediterranean and, of course, wine. That didn’t deter Kyle Song and Sara Solomon from transforming the Harvest Inn in St. Helena into a tropical paradise when they tied the knot on May 15, 2009.

“Kyle and I both have a deep-rooted love for the beach and for Hawaii, where we both lived at some point in our lives. We thought about getting married in Hawaii, but this way more relatives would be able to come,” says Sara, 30, a registered nurse at UC Davis Medical Center. (Kyle, also 30, is in the surgical residency program at the same hospital.)

The couple did their best to convey their passion without going overboard.
“We tried to make the event as tropical as we could without being too touristy,” Sara says. “We didn’t want it to feel like a luau.”

Their solution? Pull in elements of another favorite locale: Thailand, the site of their first vacation together. Guests were greeted with pre-ceremony tropical drinks. The couple had leis flown in from Hawaii to present to their parents and other key people. To begin the ceremony, the groom’s father and the bride’s father “called” to each other on conch shells, a South Pacific tradition that signals the approach of a VIP—in this case, the bride walking down the aisle. And the ring bearer? None other than the couple’s beloved English bulldog, Moose, who was outfitted with a tuxedo coat and his own special lei of ti leaves.

After the exchange of vows and rings, Kyle’s father, playing the ukulele, and Kyle’s brother, playing the guitar, sang the version of “Somewhere Over the Rainbow” made famous by Hawaiian singer Israel Kamakawiwo’ole. Sara’s parents, who live in Hawaii, contributed at the reception with a Hawaiian duet and a hula performance by Sara’s father, a former halau dancer.

As they retired for the night, Sara and Kyle were greeted by one last burst of the tropics in Napa: a room decorated with fragrant plumeria blossoms. Finally, it was off to the honeymoon—where else but in Hawaii?

The Perfect “Pear”
An abiding connection to family and a generations-old homestead near the foothills town of Newcastle were what compelled Denise Johnson and Mason Moore to marry on the grounds of Fowler Nurseries, a business Denise’s great-grandfather founded in 1912. It provided a natural backdrop for what would turn out to be the wedding’s unifying theme: pears.

The theme started when Denise allowed her bridesmaids to choose their dresses. The color they picked: pear green, a hue Denise hadn’t considered but soon realized fit with the land, its bounty and her adored maternal grandparents. “My grandparents collect pear figurines,” says Denise, 24, a full-time student at Sacramento State.

Childhood memories of time spent with her grandparents on their ranch prompted the couple’s decision to clear out a space in a cow pasture and turn it into an idyllic wedding wonderland.

So began an immense undertaking involving the sweat of the entire family. A creek was dug, rocks were brought in, a fence and bridge were built, and a waterfall was created, all in preparation for the big day.

The ceremony took place June 6, 2009—the day before the 29th wedding anniversary of Denise’s parents, who also were married on the ranch.
In keeping with the theme, six huge boxes of pears—about 500 pieces of fruit—were used to decorate the outdoor wedding site, and a cake made by Denise’s cousin was decorated with marzipan pears. The guest tables were named after varieties of pears.

The ceremony was intensely moving and personal. One of Mason’s most significant memories is of Denise’s father, handing over his daughter at one end of the bridge to her soon-to-be husband waiting on the other side.

“I’d always lived around water, we always had a stream by us, and I grew up fishing,” says Mason, 31-year-old owner of BareBones WorkWear, a local chain of work apparel stores. “It seemed fitting to have the bridge plus the symbolic effect of crossing the water.”

With Denise’s brother officiating, the couple recited vows they wrote themselves. But for Denise, one of the best parts of the day was yet to come.

“The biggest thing I wanted at my wedding was to dance with my grandfather,” she says. “We used to dance in the kitchen. But since his stroke five years ago, my grandfather has a hard time walking and speaking. He walks with a walker and cane. To be able to dance with him was the highlight of the wedding for me. I’m a typically composed person who doesn’t show much emotion, but I bawled my eyes out. And there wasn’t a dry eye in sight.”

And that’s as it should’ve been. There’s no keeping it cool when the groom battles flames for a living.

Sean’s job as a Rocklin firefighter inspired the couple’s choice of colors. “Instead of neutrals, pinks and purples, we decided to go for hot summer colors: reds, yellows, oranges and golds,” says Ashley. Katie Edwards of Ambience Floral Design in Roseville used luxurious red and orange fabrics to create vivid backdrops for the garden ceremony and the cake table.

The couple entered their reception to fanfare by a bagpiper and drummer from the Sacramento Firefighters Pipes and Drums band. “Anybody who’s part of the firefighter family—and there were a lot of firefighters there—is moved by bagpipes,” says Lora Ward, who planned the wedding. “People were standing, screaming, clapping and crying.”

But the wedding wasn’t all about heroes in yellow helmets. A different glimpse into the couple’s life together emerged during dinner, when guests were served vegetables from their garden.

“We had eggplant, cucumbers, tomatoes, zucchini, peppers. There must’ve been 10 or 15 bags of produce that we brought in,” says Ashley, who works as a civil engineer in Roseville.

For the wedding cake, Sean had a surprise up his sleeve. “I was getting ready to cut the cake with a lovely Waterford cake-cutting set that my mom had bought,” Ashley recalls, “but then he pulled out the ax that he uses at work. He ended up cutting the cake with the fire ax!”

Sean requested a special song with which to end the evening: “For Those About to Rock (We Salute You)” by AC/DC, complete with four confetti cannon launches.

The couple’s exit from the reception was as dramatic as their entrance. While Ashley originally wanted to bid adieu down a sparkler-lined path, Sean nixed that idea for safety reasons, opting instead for candlelight.

For the pair’s getaway wheels, only one type of vehicle seemed fitting. Ashley and Sean waved goodbye from the back of a vintage 1930s fire truck—the perfect ending to one of the hottest August nights on record.