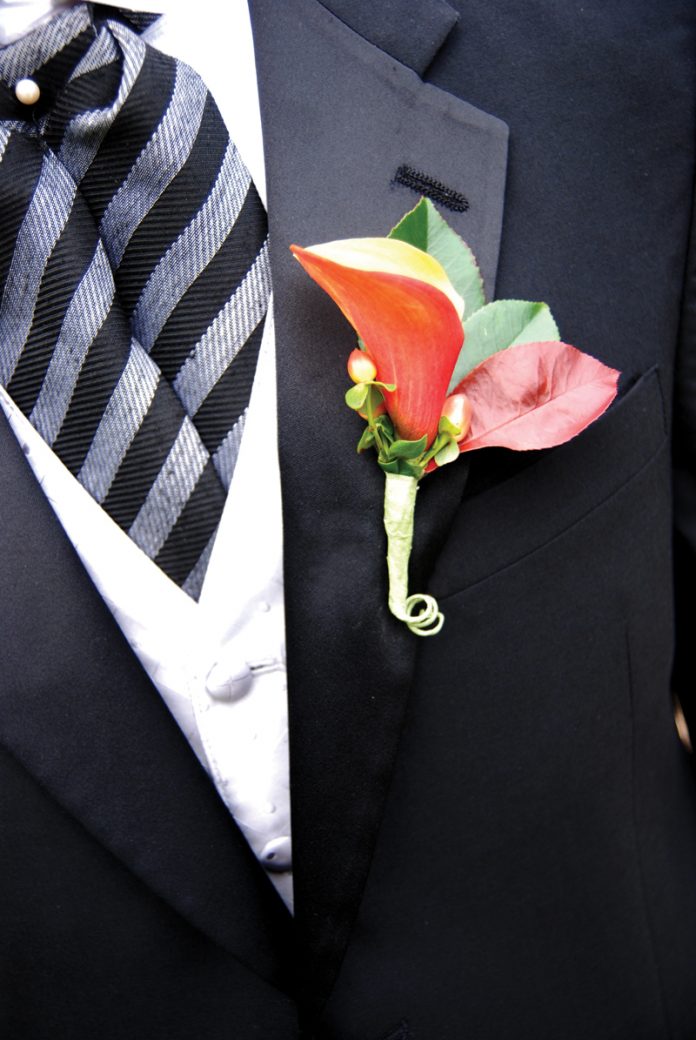 Think planning a wedding is all women’s work?
Not always.

Weddings, traditionally, are the stuff of little girls’ dreams: a beautiful white dress, a stunning floral bouquet, a multi-tiered wedding cake—with or without the plastic bride and groom figurine on top.

Those little girl’s dreams typically become the bride’s responsibilities. To make sure it all comes together on the big day, she’s the one who plans and fusses and stresses. The groom? He just shows up in a tux.

Well, not always. Sometimes, it’s the guy who wants the big wedding and makes it happen.

“My wife’s ideal wedding was a small, backyard, 30-person soiree, and I have a large family, quite a lot of friends and it didn’t fit into my princess-wedding plan,” says Lettini, 42, who owns an automotive repair shop in Sacramento.

Lucky for Lettini, wife Nicky (yep, Nicky), 30, accommodated his dream. “It wasn’t her ideal, but she understood where I was coming from,” he says.

The couple married on New Year’s Eve of 2007 with a reception for 300 at the Tsakopoulos Library Galleria downtown. With the exception of the bride’s and bridesmaids’ dresses, Lettini was involved in every aspect of the planning, from the Il Fornaio-catered dinner to the venue lighting.

The couple worked with D ebra Hiebert, owner of Très Fabu Event Planning and Design in El Dorado Hills. “The first time we met with Debra, it was supposed to be an hour meeting; it ended up being 3 ½ hours,” says Lettini, who attended all but one of the planning meetings. With Hiebert’s assistance, the Lettinis brought many ideas to fruition, in-cluding one of their most novel: projection of words such as love, family and respect in English and Italian on the columns and ceiling of the Galleria.

Lettini says he wouldn’t hesitate to be this involved again. “I enjoyed the whole thing,” he says. “In no way, shape or form did I feel like it was a chore.” Yet he says his interest in the planning process even took him by surprise. “If you would have asked me 20, 25 years ago if I would have been this involved in planning my wedding, I would have said no,” he explains. “But when I met my wife, it was so easy to be involved. It was one of those things where I love this person so much and this day is going to be so important to both of us, how could I not be involved?”

Hiebert says that she’s noticed an increase in groom involvement in wedding planning in the past three to five years. “I am having grooms attend almost all the meetings, and it is dual decision making on the décor, design, food,” she says, adding that most grooms are particularly interested in the bar, entertainment and menu selections. “I love it because the more the groom is involved, the more the event will represent that couple.” Having a wedding ceremony in front of family and friends also was important to Matt Johns, 31, who married his wife, Anna, 30, in Sacramento in May 2009. “I definitely wanted to have the ceremony . . . share my vows with everyone, and have a party at the end,” says Johns, who comes from a tight-knit family. Anna was initially reluctant, but she obliged when she realized how important having a traditional ceremony and reception was to her fiancé. Though Johns took the lead and was the original point person for making decisions, he wasn’t taken all that seriously. “People kinda laughed at us,” Johns says, acknowledging that most first looked to Anna.

Johns, an assistant engineer, says the two supported each other during the stressful moments, and there were many. But for him, it was worth it. “Hearing ‘I now pronounce you man and wife’—that was a very invigorating feeling. But it was also a really cool feeling when it was all said and done. It was, like, ‘Wow, we really did it. We survived it.’” Being involved in the planning made him feel that much more connected on his wedding day. “I felt like I experienced the whole thing, not just the day,” he says.

Anthony Stonehocker, 27, took an active role in planning his February 2010 wedding in Oakdale to wife Jessica, 29.

“A lot of the decisions we made, we made together,” says Stonehocker, who found the photographer and helped plan the engagement photos, rehearsal dinner and honeymoon. He also had a hand in selecting the reception site, DJ, food, cake, even the seating at the reception.

Anna and Matt, photography by Hannah Slamen of The Foto Atelier But there were times that Stonehocker, a project engineer for a general contractor, felt overwhelmed. “I think I was ambitious and trying to be as involved as much as I could,” says Stonehocker, who acknowledges he was more involved in his wedding than most of his married buddies were in theirs. “Some of those guys just showed up that day,” he says.

As with the Johns, the Stonehockers found working together on their wedding had a bonding effect. “You learn a lot more about one another,” Stonehocker notes. “When you do your courtship, you are not talking about wedding stuff. It forced us to jump through hoops we might not have gone through.”

Stonehocker advises other grooms to get involved. “You don’t necessarily have to provide an opinion or make all of the decisions,” he says. “Just be there so she knows that you care.” Indecisiveness plagued Gloria Casillas, 27, at times while planning her July 2010 Watsonville/Gilroy-based wedding, but fiancé Enrique, 28—whose art studio degree from Sacramento State required him to take photography and color theory classes—helped her choose their olive, gray and teal wedding colors. He also quizzed photographers, ensuring they were experienced professionals. “I didn’t just want some regular guy who just decided to take on photography,” Casillas explains.

One area where Casillas, a service representative, excelled: getting a bargain. “It was like a scavenger hunt, going [from] place to place in search of the best deal,” he says.

Sacramento based sports practitioner/chiropractor Ed Chu can relate to that.

Why? Because he could be.

“The prices were way overinflated for everything,” Chu says. “With the economy, you can argue down prices for everything.” Oftentim es, when Christina found something for the wedding, Chu would step in to find it at a better price.

Chu even got Christina to climb aboard his bargain-finding bandwagon. She bought their wedding invitations over a three-month period by returning to Michaels repeatedly with the popular arts-and-crafts chain’s near-weekly coupons in hand.

Christina Chu says she appreciated her husband’s cost-cutting ways. “It was good to see him enjoying some part of it,” she says. “In the end, it does make him feel good when he could haggle the price down to what he could get.”

Still, Chu, who says he saved only between $500 and $600 through haggling, now thinks it wasn’t worth it. “I tell Christina I am happy to be married to her, but if I were to turn back time, a destination wedding is the way I’d go.” Unlike the other grooms interviewed for this story, Ryan Arba, 27, says he did not play a large role in planning his June 2010 wedding to wife Katie, 24, in Calistoga. But if he didn’t agree with a decision, he let it be known. “I viewed myself as the governor in the state of California’s budgeting process. I had the option to line-item veto,” says Arba, a graduate student in public policy.

Some of the items Arba struck off: expensive wine glasses (“no need to spend $4 on each glass”), costly flowers and an overstaffed reception. “Most of mine were cost-related,” says Arba, adding that if he didn’t like something, he “was very firm and just said, ‘No, we’re not doing this.’”

Oh, my! Could Arba be considered a—gulp—groomzilla? “Sure, I was a groomzilla. I made it difficult,” admits Arba, laughing. But he says Katie realized that if he made a fuss, it was because it was important to him. “We’ve been together long enough that she knows that I tend to be the type of person who goes along with most things. So if something crosses the line, then I object.”