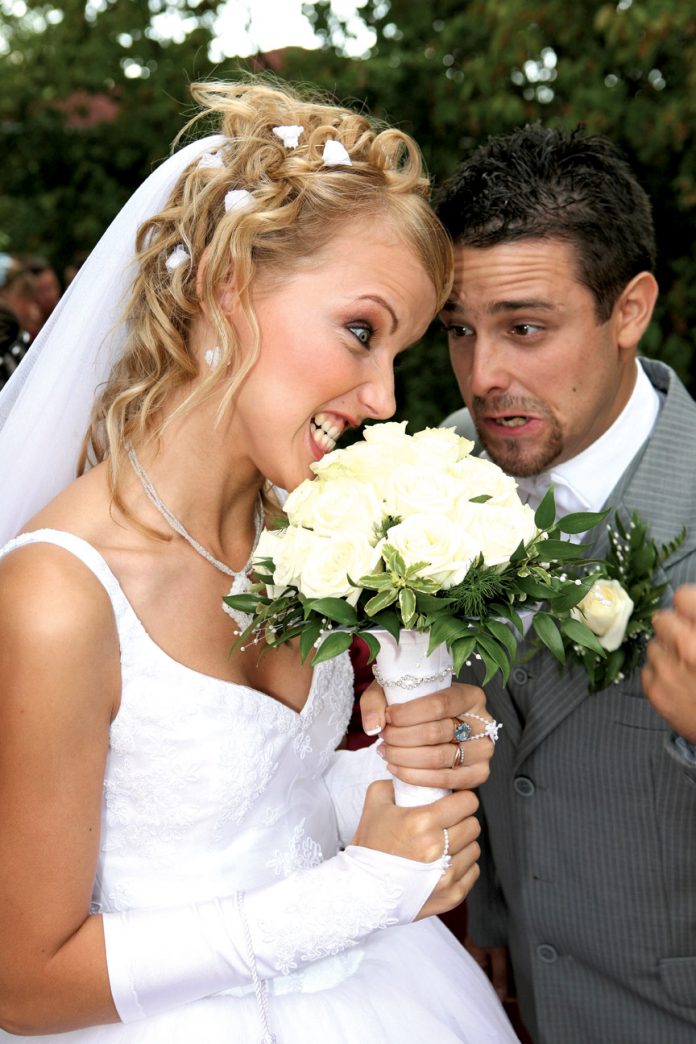 It’s her wedding day, and she’s determined to be the star of the show. A neurotic, perfectionist control freak, she’s not about to let anyone or anything stand in her way.

In 24 years as one of Sacramento’s busiest wedding photographers, Christopher Kight has seen his share of difficult brides. But one stands out.

It was a scorching-hot summer day, he recalls, warming to the memory. A hundred and twelve degrees and no air-conditioning. The church was packed.

When the bride arrived 10 minutes late, Kight tried to hurry her down the aisle, pointing out that her guests were miserable. But the bride put her foot down. It’s my wedding, she said before disappearing into the church dressing room for 45 minutes of primping. They’ll wait.

Meet Bridezilla. Imperious, demanding, selfish and controlling, she’s a modern-day monster in an Elie Saab gown and Christian Louboutin heels. Like a spoiled 2-year-old, she wants what she wants and she wants it now. She expects all those around her to acquiesce to her every demand, no matter how petty or outrageous. And woe betide the poor bridal attendant, hairdresser, caterer or makeup artist who doesn’t.

Maid of honor fails to lose 10 pounds per the bride’s orders? You’re out! Hairdresser leaves a tendril dangling in the wrong place? Idiot! You’re fired! Best friend refuses to foot the bill for a bachelorette party in the Bahamas? You’re dead to me!

The way she figures it, it’s her day, dammit, and everybody else had better get on board.

Local wedding planner Katy Baker warns brides at their first meeting that she won’t tolerate bridezilla behavior. They laugh, she notes. They don’t think of themselves as bridezillas. But Laurie Schmalzel, another Sacramento planner, knows better: There’s a bridezilla lurking in every human being, she says.

The bridezilla is a staple of modern American culture. There are websites and books devoted to the phenomenon. There’s even a reality TV show: WE’s jaw-dropping Bridezillas, which shows foulmouthed brides having meltdowns, throwing hissy fits and screaming I need attention! at their hapless attendants. (Viewers can be excused a bit of schadenfreude when one obnoxious&emdash;and very drunk&emdash;bride drops the wedding cake she spent 12 hours making.)

But bridezillas are not just the stuff of paperback novels and basic-cable TV shows. Schmalzel recalls one bride who spent her special day alienating everyone in sight with her overbearing behavior. The last straw was when a bridesmaid unwittingly asked the DJ for a song on the bride’s Do Not Play list. Enraged, the new Mrs. yanked the DJ’s electrical cord out of the wall. (The fed-up bridesmaids walked out in protest.)

Wondering where these harpies come from? In some cases, bridezilladom is bred in the bone. Kight blames it all on Mom and Dad, who’ve let their little darling get away with murder since she was in pigtails. She’s been throwing fits since she was 2 years old, he says. But as he points out, most brides are good people&emdash;really, they are. When a perfectly nice gal turns into Bridezilla, there’s usually a reason.
Most bridezillas are made, not born, says Kight. Stress is the No. 1 cause.

Take a momentous event (getting married), throw in some emotionally charged family dynamics (your mother threatens to boycott your wedding if your father brings his hot, young, new wife), add the sort of logistical challenges that would throw Gen. David Petraeus for a loop, tie it all up with a five- or six-figure price tag, and it’s no wonder the bride starts acting a little
. . . nutty, shall we say?

Wedding planner Baker, for one, has sympathy for the devil. Planning a wedding is nerve-racking, she notes. There’s so much tension and emotion. It’s hell.

For many brides, money is the biggest stressor. Consider this: The average American wedding these days costs $28,000 and change&emdash;ka-ching! Along with anxiety over spending all that scratch come unrealistic expectations created by magazines like Martha Stewart Weddings and TV shows like E!’s 20 Most Expensive Celebrity Weddings, which have convinced an entire generation of brides that they, too, deserve a wedding as fabulous as Madonna and Guy Ritchie’s $1.5 million Scottish-castle nuptials.

In most cases, this is the biggest party you’re ever going to throw, says Schmalzel. That causes many brides to lose all sense of perspective.

For the monetarily stressed-out bride, the dress, the food, the flowers, the music, everything down to the tiniest detail (personalized M&M’s, anyone?) simply must be perfect. If anything goes wrong, temper tantrums ensue.

Bridal professionals can spot a bridezilla at 20 paces. A gal with poor organizational or time-management skills, for instance, is headed for trouble. Wedding makeup artist Cynthia Uranga knows the signs all too well. If the bride’s running her programs off on a copy machine in the hotel room on the day of the wedding, I know she’s going to be a bridezilla, says Uranga.

But experienced wedding professionals know exactly how to deal with incipient bridezillas before their behavior gets completely out of hand. Part diplomat, part therapist, a pro can talk even the craziest bride down.

Gray once had a bride who took her nerves out on the photographer. She got in my face, he recalls. Keeping his temper, Gray politely instructed her to take a couple of deep breaths. We’re going to enjoy this day, he told her. Now let’s get started. Later, she apologized. She turned out to be the most gracious person, he says.

When Baker sees a client start to turn from Miss Jekyll into Mrs. Hyde in the weeks before the wedding, she lays down the law. Her rules? Have a weddingless weekend. Translation: Do nothing wedding-related for two days. No using the b-word (bridal) or the w-word (wedding). No visiting wedding websites or chat rooms. And no wedding TV shows or movies, either. Not The Wedding Planner. Not The Wedding Singer. If it’s Donald Duck in a veil, you can’t watch it! On the wedding day, if the bride looks like she’s about to start throwing things, Baker hands her a Nerf ball, which she keeps in her bridal bag of tricks for just such occasions.

Crying. Screaming. Throwing tantrums instead of Nerf balls. Bridezilla behavior isn’t pretty. But sometimes, it can be justified. Kight had one such experience back in the mid-1980s.

The bride arrived late for her wedding at the Cathedral of the Blessed Sacrament in downtown Sacramento, and she glared furiously as she stomped down the aisle. At the altar, she turned around and addressed the congregation. I’d like to thank the maid of honor for sleeping with the groom last night, she spat out, according to Kight’s recollection. She can have him! With that, she walked back down the aisle, got in her limousine and drove away.

Brides don’t have the monopoly on bad wedding-related behavior. There is another monster stalking the bridal landscape. Behold Momzilla.

Mothers of the bride can be even worse than the brides themselves, says wedding planner Katy Baker with a shudder.
Photographer Christopher Kight recalls a bride whose overbearing mother insisted on running the show. Mom, the exasperated bride finally said, this is my wedding.

You had your wedding years ago, her daughter said.

No, countered the mother. That was my mother’s wedding. This one’s mine.

Kight refers to the contagion of insanity that turns a loving mother into a difficult diva who tries to hijack her daughter’s wedding day. Another of his clients almost had her wedding day ruined by her mom, who became unglued when the caterer served tiny quiches (the horror!) during the cocktail hour against her instructions. She threw a fit, says Kight. She dressed down the catering manager and threatened not to pay the bill.

And then there’s Groomzilla, who can be just as bad as Momzilla&emdash;just in a different way. According to Kight, he falls into one of two categories: the groom who gets drunk with his groomsmen before the ceremony, infuriating the bride and her family, and the rude, arrogant jerk who refuses to pose for photos after the ceremony. (He’s usually at the bar having a beer, Kight says.)

When that happens, Kight takes the bride aside and says, Honey, if you want these pictures, you’ve got to sort this out. As we all know, if there’s anybody who scares the life out of Groomzilla, it’s his Bridezilla.&emdash;Marybeth Bizjak