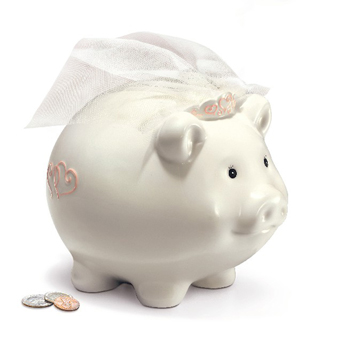 Until recently, brides and their grooms frequently pulled out all the stops on over-the-top nuptials. But now, a tough economy has many pulling in the reins.

It’s a good thing Rachael Patterson wasn’t one of those girls who dreamed of big, sparkly diamonds and Cinderella weddings. Thanks to that thing we’re finally calling a recession, the El Dorado Hills bride-to-be is sporting a ruby engagement ring, considering a pre-owned bridal gown and honeymooning in brisk British Columbia instead of on the Hawaiian beach she preferred.

We are trying to keep the budget beastie under control,” says Patterson, 34, who works for a Sacramento-based trade association and will marry 39-year-old graphic designer Sam Cowan on June 6. “We are trying to avoid acquiring debt.

Whether you call it a downturn, a slide or a slump, the economy is driving one wedding-day decision after another for Sacramento area brides and grooms. Couples are whittling down their guest lists, delaying their dates and taking an assortment of other measures to keep costs in check.

“I find that [they] are being much more deliberate, taking the time, thinking things through,” says Laurie Schmalzel, a Sacramento event planner and wedding consultant. “They are having longer engagements, which means more time to save and more time to [comparison] shop.”

Business owners, in turn, are getting more creative in marketing their services. “The collapse in the economy means caterers and vendors are hungry for business. We’re seeing wedding vendors willing to cut prices,” says Alan Fields, co-author (with wife Denise) of Bridal Bargains: Secrets to Throwing a Fantastic Wedding on a Realistic Budget (Windsor Peak Press).

The average cost of a wedding in the United States is close to $29,000. Still, the Boulder, Colo.-based Fieldses, whose book is in its ninth printing, believe it’s possible to throw a quality event even in light of some belt-tightening.

Brian Geremia of Carmichael and his fiancée, Megan Hackard, roundly agree. The two—who knew each other casually in high school, then reconnected at a wedding in 2007—will marry Jan. 10. Both come from long-standing Sacramento families and have scores of out-of-town college friends from their respective alma maters: Georgetown University in Washington, D.C., for Hackard; Loyola Marymount University in Los Angeles for Geremia.

At 250, the guest list has definite heft. But while they once listed a dozen wedding attendants apiece, the duo has each settled on a solitary sibling. “That has saved so much: less money, less stress,” says Geremia, 24, a partner in Academic Impact, a tutoring firm, and co-founder of the local social justice initiative, Go Do Good.

Geremia and Hackard have made other practical decisions. Among them: opting for a sit-down dinner at Vizcaya instead of passing “heavy” hors d’oeuvres (the latter was surprisingly pricier, they say) and honeymooning at the family cabin in Lake Tahoe in lieu of the overseas vacation they initially considered. They also ordered the wedding cake and the truffles for their wedding favors from the same bakery, netting a price break.

Hackard, 25, who works as a floor manager for the state Senate Republican Caucus, received good counsel from her mom. “She said, ‘I think you need to realize people you know who are getting married are really cutting back,’” Hackard recalls. “‘The focus needs to be on you and Brian, and not on making a huge statement with your wedding.’”

Their ceremony will be steeped in tradition. The couple will marry at Sacred Heart Catholic Church in East Sacramento, the same parish where Geremia’s own parents and grandparents were wed. And several of their guests will take part in the service.

The troubled economy is as good a time as any to shift from the recent trend toward extravagant, multiday affairs to simpler celebrations with a greater emphasis on the ceremony, says Schmalzel. “Instead of just getting the nuptials done, I’m guiding my clients to realize what is more important at the end of the day: that you’re married, not that you had a big party.”

“Don’t get me wrong—not that the party’s not important,” adds Schmalzel, who isn’t immune to the current economy, having added wedding invitations to her list of services to offset a recent dip in business. “But I like to say it doesn’t cost you any money to make your ceremony any more special.” She suggests that brides and grooms exchange love letters just before the wedding starts or give them to their parents to read aloud during the ceremony, and that they invest time in choosing meaningful music and writing their own vows.

Patterson and Cowan, who met on Craigslist, have found their own way to infuse added meaning into their wedding day by doing for others. At first, they hoped to stage their ceremony and reception in Lake Tahoe but were “quickly priced out of there,” says Patterson. She read up on Sacramento’s Casa Garden Restaurant on the Internet and loved that the location doubles as a moneymaker for the Sacramento Children’s Home, which operates the restaurant.

Then Patterson heard about another cause from a Craigslist discussion forum: Brides Against Breast Cancer. The national organization collects previously worn wedding gowns from former brides and brand-new donations from manufacturers, then sells them at “gown tours” staged around the country. Proceeds go to women with terminal cancer.

“We really love the idea that the money we spend on our special day goes to deserving groups,” says Patterson, who plans to purchase her wedding dress this month at one of the charity group’s sales. “Not only is [the dress for] a great cause, but it really is an affordable way to go.”

Instead of conventional wedding favors, the couple is giving money to the American Society for the Prevention of Cruelty to Animals in memory of Patterson’s late cat, Cosette. They’re using ASPCA-designed place cards to tell guests about the donation.

Rounding out the list of thrifty wedding measures: Patterson’s birthstone engagement ring, hand-selected play- lists and home-burned CDs in place of a disc jockey, and a honeymoon 4,500 miles closer to home than originally intended. In fact, the newlyweds may even drive to British Columbia and take advantage of free lodging en route. (Patterson’s parents live in Portland, Ore.)

Wedding experts agree that lengthy engagements, smaller guest lists and off-peak time slots are among the best ways to keep bridal costs down. Jessica L’Etoile and Jake Windham of Sacramento, who both work in law enforcement, are doing all three. They scheduled their wedding for two years out, with the intention of beefing up their savings in the interim. When they started making the rounds of reception venues, they were taken aback by the prices. They wound up booking at a local wedding venue for a Sunday.

L’Etoile and Windham tried to keep their guest list to 60 but found it too restrictive. The final count likely will be closer to 100. Still, that leaves a lot of people out. “The wedding list was tough,” says L’Etoile, 26, who met her 33-year-old groom through mutual friends. “We didn’t realize how many people at work, or friends of friends, just assumed they would be invited. We kind of made it clear in advance that it was going to be a smaller wedding.”

Quality food and a good photographer were the couple’s priorities for the reception. They’re saving mightily on their floral budget by buying silk flowers at Michaels. That decision is both a requisite because of Windham’s severe allergies and a practical alternative that will cost less than $200, as L’Etoile is stockpiling the faux blooms every time they go on sale.

“It just seems that having the longer engagement has given me time to be creative,” L’Etoile says. She is making the wedding invitations, menu cards and other paper crafts herself, and she’s had ample time to familiarize herself with her computer software.

Yet author Alan Fields has observed a counter tack among some economizing brides and grooms: the quick engagement. “Weddings on shorter notice limit the frills,” he says. “The more time you have, the more bridal shows you go to, the more tchotchkes you buy.”

Author Denise Fields is a big fan of the brunch or restaurant reception, and of holding weddings during the less popular months of November, January and February (with the exception of Valentine’s Day). “Everybody wants a Saturday night in June,” she says.

The Fieldses suggest that brides and grooms can take advantage of the current economy by finding vendors more willing to negotiate. Philip Paw, president of Hannibal’s Catering in Rancho Cordova, says that requests for lower-priced menus are indeed on the rise. “Brides are really looking for more [of a] deal and are comparing prices, which in turn takes longer [for them] to make a decision,” he says.

Paw cautions shoppers to be wary of extremely low pricing. “Many of these caterers book weddings, but they won’t be around next year to cater them because they can’t pay their bills,” he advises. Hannibal’s, in business some 23 years, is booking weddings into 2010, he says, but is fielding fewer calls than last year.

Other vendors, such as Traci Bucher of Traci Lynn Makeup Design in Auburn, may be getting nearly the same number of calls as in the past, but for fewer services. Weddings make up the bulk of her business. Until recently, though, she was routinely brought in to work on the entire bridal party—even the mother of the groom. These days, most of her calls are for the bride and, maybe, her maid of honor.

Bucher is offering a variety of promotions to stimulate business, from discounting services to promising free false eyelashes with every makeup job. “It’s kind of a bummer,” she says, “but it’s the sign of the times.”