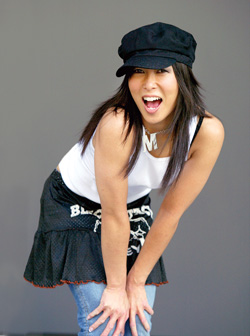 On a recent Monday, tiny Mary Kawano is multitasking in a major way. An employee at Sugar Shack, the hot women’s wear boutique she owns in Sacramento’s midtown, has called in sick, and when Kawano arrives just a few minutes past opening time to unlock the doors of the J Street store, four tattooed and pierced young women already are waiting outside. Also waiting is a sales rep from Steady Clothing, with a rolling rack of midsummer fashions for Kawano to preview. All smiles and enthusiasm, Kawano tends to her customers (she seems to know all of them), answers the phone, cranks up an indie-pop CD, fields questions from this reporter and flips through the rack of garments.

The sales rep’s offerings are a colorful mix of minis, tiny Ts and camisoles, low-rise pants and cotton sundresses—many of them adorned with silk-screened skulls and crossbones, Roman crosses or rose appliqués. Kawano pulls out several items and sets them aside, providing a running commentary:  “This could be sexy . . . cute fabric . . . this will do well . . . striped shirts are good . . . I wish you had this in white—it looks like such a good fit.” Presented with a turquoise sundress that fits loosely through the midriff, she shakes her head. “No, girls want to be sexier here,” she says emphatically, gesturing toward her own size-zero waist.

Every few minutes the doorbell announces a new customer. She calls out in her husky, happy voice, “Hi, you two!” “Hi there!” “Hi, are you on your lunch break?” When Kawano steps away from the sample rack to help a customer, the sales rep, Carrie Kennedy, watches her admiringly. “That’s it right there,” Kennedy says. “To have a successful boutique is all about your relationships with your customers. They want to go where they’re known, where they can run in and out of the dressing room and have a good time.”

Kawano clearly knows the trick to running a successful boutique. At age 30, she owns not one but two of them: the edgy Sugar Shack and the more upscale, fashion-forward Krazy Mary’s, her first venture, on Folsom Boulevard in East Sacramento.

“I always knew I was going to own a business,” says Kawano, who grew up in Sacramento’s Garden of the Gods neighborhood and graduated from El Camino High School. She got a firsthand look at running a business by watching her parents, who owned a restaurant, Nagato Sukiyaki, for 33 years. “Even though I could see it was really hard work, I was always interested in the business side of running a company,” she says.

“When I was little,” she adds with a laugh,  “I would pretend I owned a diner. My twin brother would agree to play my bookkeeper if I would make him a sandwich.”

By age 12, Kawano had decided that her business would be a hair salon.  But just a few months into Sacramento City College beauty school, she discovered she was allergic to many of the salon chemicals. Temporarily shelving her entrepreneurial dream, she spent four years at Salon Glorioso (now Salon Montage), where as salon coordinator she managed the schedules of 15 stylists and aestheticians. Her former boss, Trish Glorioso, says Kawano “had an impressive work ethic. Customers loved her and her sense of humor.”

“It was my first multitasking job,” says Kawano. “And I was surrounded by successful women who were paying a lot of money for salon and spa services. I learned a lot about communication and how important it was to be personable.   Plus, everyone I worked with was way older than me. I had to learn to assert myself.”

Later stints as a sales rep for salon products Future Look and Big Sexy Hair put her inside Sacramento salons, where clients and stylists were always talking about fashion. “They were always shopping and working on their looks.  They were so into clothes,” says Kawano. “I thought, there’s got to be a niche for a boutique in Sacramento.”

Her job often took her to Los Angeles, where on her own time she began doing research on the fashion industry, learning about fabrics, deliveries and manufacturers. A trip to Japan left her agog at the level of service in retail establishments there. “My ideas were building,” says Kawano. “What took shape was a one-of-a-kind store with one-of-a-kind clothing—the best quality and fabrics plus incredible service. And it had to be a cool, hip place. My roommate thought I was nuts. She was always saying, ‘Mary, you’re crazy.’”

With the aid of an online mentoring organization, she created a business plan that helped her snare a $20,000 bank loan. More online research taught her where to buy merchandise. She already had amassed $16,000 in personal savings as seed money for her store. So, at the age of 26, when many people are still slogging through school or chafing at entry-level jobs, Kawano was ready to strike out on her own. She met resistance from landlords who were reluctant to rent to someone so young and inexperienced. But her leasing agent was convinced of her potential and helped persuade her current Folsom Boulevard landlord to take Kawano on as a tenant.

In July 2000, Kawano signed her lease and dubbed the store Krazy Mary’s, although she had four months of hard work ahead of her before she could open her doors to the public. “I’ve seen people put all new fixtures into a store and spend a fortune,” she says. “But I had a realistic idea of starting a business.” She designed the minimalist cable-hung clothing racks herself and paid a contractor friend to build them. The lavender walls and fuchsia concrete floors? “I painted the store myself with my boyfriend. My ex-boyfriend,” she laughs.

From day one, the store was a success, attracting a loyal mix of hip young moms, state workers and professionals. “These are uptown girls—women who work hard and play hard,” says Kawano. “They want great fashion but with an edge, sort of a ‘Sex in the City’ look. I used to look at clothes for the store and wonder, is Sacramento ready for this? But now they’re much more daring. And they know they’ll see great stuff here first rather than at the mall.”

Within six months of opening Krazy Mary’s, Kawano had paid off her $20,000 loan. Yet, she says, “The first year felt like six. I worked from 11 to 10, seven days a week.” Eventually she hired staff and found her rhythm.

“Every day I was learning from my customers what worked and what they wanted to buy,” Kawano continues. “It’s all about listening. As I got to know my customers better, I got to be a better buyer.

“In the beginning, the store was more casual, but now I have designer collections—Betsey Johnson, Sue Wong, Mica—plus a ton of designer jeans.  Now it’s all about the labels. Women know what jeans you’re wearing just by the pockets.”

But Kawano wasn’t satisfied with owning just one successful boutique.  “I started thinking about something smaller, too—an artsy kind of store. Unique, funky, with a less expensive inventory.” When the J Street location became available, Kawano snatched it up. She opened Sugar Shack in December 2002. It has a bit of a thrift-shop feel, with magenta, teal and sage walls plus an old-time fan rotating overhead. The clothes are funky and body-baring. And the store is a showcase for a number of local artists who create one-of-a-kind clothing, jewelry, handbags, hats and other accessories. A local artist, Anthony Padilla, painted the wildly colorful murals that cover the store’s exterior. Prices range from $15 to $150. Kawano describes her Sugar Shack customer as “a Midtown girl, maybe a waitress or hairdresser—somebody in the scene. She may have two or three jobs. She’s artsy, never afraid to show her own style.”

Kawano already has plans for her next business venture. “I want to design and manufacture my own clothing line—casual, urban things that are very body-conscious, very girly but with a punk edge. I’m playing with a name for the label: Wink.”

On a recent day at Krazy Mary’s, with Top 40 tunes pouring from the speakers, Kawano talked about her own style, which she laughingly calls “rocker punk girl.” She was wearing a tight white T-shirt that revealed a black bra; low-rise distressed jeans; and a silver-studded belt. Open-toe, floral stilettos added three inches to her 92-pound, 4-foot-11-inch frame. “More and more, I like things that feel good, not just look good. I want good fabrics that don’t shrink,” she says.

With a sweep of her hand, Kawano says, “I have a passion for dressing people, helping them with fit, finding clothes that compliment their bodies. Fit is everything. I’m always asking, ‘Does it feel good? Do you love it?’ If the answer is yes, they’ll come back.”

Nora Heston Tarte and Photography by Paula Steffens - September 16, 2021
Near me
40 miles