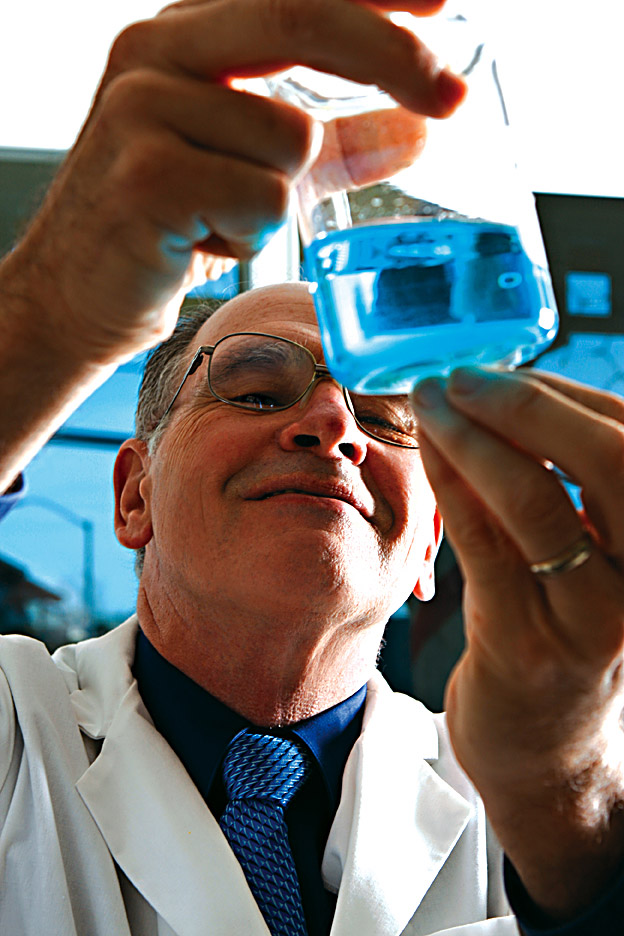 This Placerville pharmacist makes a whale of a difference in the lives of his patients.

Talk about fish out of saltwater. When two wayward whales wandered 100 miles upriver to the Port of Sacramento last May, confused and injured, they needed more than just a traffic cop to help get them back to their migratory route in the Pacific Ocean. They needed William R. Wills.

Here I sit, a common, ordinary pharmacist, waiting at the Coast Guard station for the rest of the scientific team, renowned scientists from across the nation, he wrote shortly afterward in a medical journal. Solicited to help by a Sea World veterinarian and drawing upon his wisdom and years of experience as a compounding pharmacist, Wills prepared comparatively large quantities of antibiotics under time pressures created not just by the mother and baby humpback whales’ desperate plight but also by the looming Memorial Day weekend, which complicated the gathering of chemicals to formulate the medication.

What makes this experience, this day so distinguishable from the rest? Because the patients are so big . . . and so big in the attention they have drawn.

Wills’ medicine, rescue workers’ efforts and perhaps the whales’ innate sense of course correction culminated in a happy ending, as the meandering mammals, whose health showed rapid signs of improvement after the giant shots of antibiotics were administered, are believed to have made their way back to the ocean.

Bill Wills is a compounder, his word for a compounding pharmacist, of which he and his business-partner son Dan reckon there are 300 to 400 in the country. Wills mixes a lot into his schedule. He speaks to community groups, consults with hospice programs and has been a leader in his church for more than 40 years. He and his wife, Jonette, have been married nearly a half-century and have had 10 children. Twelve years ago, in his 50s, Wills founded one of Placerville’s most successful businesses, Grandpa’s Compounding Pharmacy.

What is a compounding pharmacy, and how is what Wills does now different from what he did before as a mainstream pharmacist?

As a compounder, what we do is make medications using FDA-approved medicines in a non-FDA-approved way, says Wills, a tall man who looks to be in great shape for his 65 years. It may be we take something you are allergic to out. It may be that we need to get [the medication] into the system that you cannot swallow.

A woman patient with bipolar disorder recently presented Wills with this problem: Her body could not process the 25-milligram pill her doctor had prescribed, nor could she handle a quartered pill. Wills was able to make 1-milligram capsules of the medication, which allowed the woman and her doctor to regulate the proper dosage.

We try to meet the unique needs of a particular patient by manipulating [the medicine] in whatever way we have to, Wills says, and get the best from it with the least amount of side effects.

Recently, we sat down with Wills&emdash;a Denver native whose family moved to Elk Grove when he was 9&emdash;in his son’s office at the pharmacy and sifted through some of the ingredients that formulate his accomplished life.

Q. Your involvement with the two whales this past May&emdash;you called it a once in a lifetime experience: exciting, interesting, educational and rewarding. In general terms, now that some time has passed, how would you describe that experience?

A. Yes, it was exciting. It was unique. It was an incredible experience. But the things we do on a daily basis are much more important. How can I help you? Two whales out in the ocean will not have nearly the impact on society that you can have. If I can help you in your life, it will be more meaningful.

Q. In 1998, you are quoted in the Sacramento Business Journal as saying, Pharmacy today is no fun. All you are is an insurance adjuster. Do you think that’s still the case?

A. I think it’s more so. That’s the reason that I got into compounding only. I had been [a standard pharmacist] for 25 years, and I loved it. I wanted to go with an independent (run his own compounding pharmacy), because I wanted to be able to provide individual service for the patient. To me, that’s what pharmacy is all about. And that did well for many years. Then the insurance companies became more and more involved as people got health insurance. Then it got so they were the ones calling the shots.

What it’s boiled down to is you are filling more and more prescriptions to try to make a profit, which means you have less and less time to care for the patient. . . . It’s no fun to be a regular pharmacist anymore. You’re just an insurance carrier. They don’t have time to work with patients, they don’t have time to be a pharmacist&emdash;I mean, you’ve spent how many years going to school to learn all this science, and how can I help you? But you can’t do it because there’s no time.

Q. You also are quoted in the Journal as saying, The doctor is still the diagnoser, he’s still the one in charge. But I have the opportunity to help him more. Would you please elaborate on that?

A. If you’re a compounding pharmacist who really gets involved, really cares, really works toward becoming a good pharmacist and trying to provide for the patients and all the things that go with it, you’re going to go to a number of seminars. . . . And in those seminars, you learn a lot of out-of-the-box opportunities for treating certain types of illnesses, ailments, whatever you want to call them. With that, the doctor doesn’t know, so someone’s going to have to educate him. So we have to spend a lot of our time educating either the public, the private individual or the doctor. In this mixture of people, the doctor will eventually come to the knowledge that, hey, here is something that I could do that I’ve never been taught before or is not necessarily out there in the commercial market. And so you have a much greater opportunity to interact with the doctor in a meaningful way.

Q. What is an example of a case in which you have helped someone?

A. A child who had a behavior problem where he would beat his head against the wall until it would bleed. The doctor had a medicine, but it was an adult dose. They needed a pediatric dose for it, and the medicine was extremely nasty tasting. (In his laboratory, Wills developed a medicine he had not used before and suggested it be applied to the boy.) The mother at nighttime would just give the kid a back rub&emdash;and lo and behold it gets into the bloodstream, and we’ve got an effective medicine. So there we were able to change the dose, change the route of administration, and we have a very effective way to treat the patient.

Q. Can you pinpoint what motivates you to do what you do, considering you aren’t paid nearly as much as are mainstream pharmacists?

Q. What sort of relationship do you have with mainstream pharmacists?

A. Fine. They see that we’re needed in a unique fashion. For the most part, most of the pharmacists say, Oh, you need to get that at Grandpa’s. He’s the guy who makes things. I’m not encroaching on their area. And in pharmacies nowadays, because there are so few independents, the jealousy . . . just isn’t there.

Q. I understand you have 10 children and 46 grandchildren. Will there come a day when you’ll change your business’ name to Great-Grandpa’s Compounding Pharmacy?

Q. Seriously, why so many kids?

A. Well, it goes back to my understanding of the importance of people. We’re Mormons. In our religion, we’re taught that before you came to Earth, your spirit existed. That it needs to come to Earth to gain a body and gain experiences to prepare for when it leaves this Earth. If I don’t provide a quality home for them, those spirits are going to go somewhere.

Q. Do you have any advice to young people interested in becoming a pharmacist?

A. It would be the same general advice you would give anybody. You develop a dream. You determine that that is really what you want to do. And then you hang on to that dream . . .

I am an average, run-of-the-mill, Joe Schmo pharmacist. I was not a top jock in school. But I have become an important element in the community because I’ve had a dream, and I stuck with it, and I’ve tried. I’ve worked hard. I didn’t give up. I know that I can do something, and I think if people&emdash;whatever they go into&emdash;if they just develop that type of desire, and so on, they’ll be able to accomplish it.