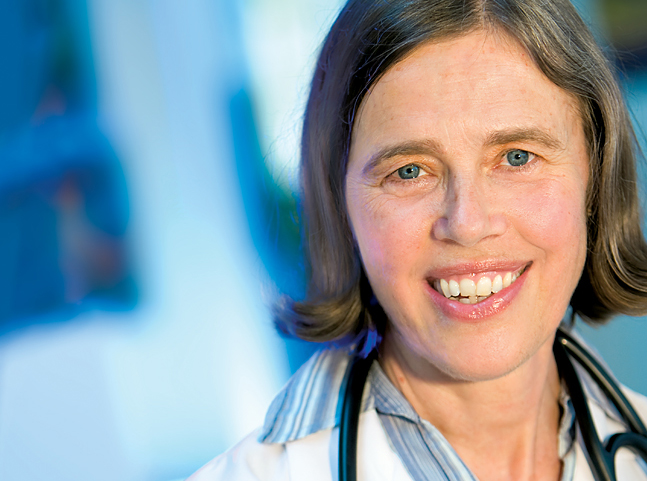 Certainly, there are a lot of cruel diseases—ones that are disabling, chronic or require difficult treatments. But there is something particularly vexing about autoimmune disorders.

After all, with autoimmune disorders, it’s a person’s own immune system—designed to protect them against disease—that inexplicably goes haywire and begins attacking healthy body systems. In rheumatoid arthritis, the immune system attacks joints; in lupus, body organs; in Graves’ or Hashimoto’s disease, the thyroid gland; in multiple sclerosis, the nervous system; and in celiac disease, the intestinal tract.

What’s more, many autoimmune disorders strike adolescents and young adults, most of them female, at a time in their lives when they are just making their way in the world—building careers, starting families. And the disorders often initially have subtle symptoms, making them easy to ignore and hard to diagnose. “Even physicians don’t think enough about autoimmune disorders,” says Michael Okimura, M.D., an endocrinologist with Kaiser Permanente. “Symptoms can be vague. When we, for example, see weight loss, bloating, we think irritable bowel syndrome. But we need to think about celiac—it’s not a rare disorder.”

On the other hand, many people wildly fear autoimmune diseases without truly understanding what they are. Remember George Costanza in “Seinfeld”? His first panicked response in any medical setting was always, “Is it lupus? Oh, God, I know it’s lupus. Say it isn’t lupus!”—even though he was, for the most part, the wrong age and wrong gender to be at risk.

The good news is there are new ways to diagnose and treat autoimmune disorders, making most easier to deal with and less debilitating than in the past. In the short term, research may bring about better medications; long term, it may lead to the possibility of people avoiding these diseases altogether.

Addison’s Disease—involves failure of the adrenal gland, which provides cortisol to the body to help handle stress and illness

Celiac Disease—an intolerance of the protein gluten (found in wheat and other food products), which causes the immune system to attack the intestinal villi, tiny fingerlike protrusions that normally help the intestine absorb nutrients

Graves’ Disease—causes hyperthyroidism, or an overactive thyroid gland, often resulting in weight loss and other symptoms

Guillain-Barre Syndrome—immune system attacks the peripheral nervous system, which can result in almost total paralysis (yet even the most severe cases usually spontaneously recover)

Hashimoto’s Thyroiditis—causes hypothyroidism, or an underactive thyroid gland, often resulting in weight gain and other symptoms

Rheumatoid Arthritis—white blood cells move from the bloodstream to the membranes that surround joints, causing inflammation (swelling and pain) that, over time, can result in damage to ligaments, cartilage, tendons and bone

Because each autoimmune disorder affects a different part of the body, treatment and research tend to cut a wide swath across medical specialties: endocrinology, gastroenterology, neurology, rheumatology, dermatology, and nephrology. It’s also difficult to generalize too much about diseases with such diverse symptoms. That said, however, there are some intriguing commonalities.

For instance, it seems clear there is a genetic predisposition to autoimmune disorders—there usually is a family history, risks are higher for identical twins, and it is common for people to develop more than one (someone with Hashimoto’s thyroiditis may also have rheumatoid arthritis or Addison’s disease). But here’s where the mystery comes in: What exactly triggers or sets off the disease process in some people and not in others? How does the immune system make such a mistake?

No one knows for sure, but theories abound and are the source of intense debate and research. With regard to lupus, which is usually first seen in teenage girls, experts agree that hormones likely play a part. UV light also may be a culprit and is considered a cause of lupus “flare-ups.” “We have patients cover up with scarves in the summer, stay out of direct sunlight,” says Lavjay Butani, M.D., a pediatric nephrologist with UC Davis.

Yet sunlight might actually protect against developing multiple sclerosis. “There’s a big geographical difference: It’s twice as common in northern climates than in southern,” explains John Schafer, M.D., director of Mercy’s multiple sclerosis center. “So one of the theories involves [the benefits of] vitamin D, because people in Florida are exposed to more sunlight than people in North Dakota.”

Many autoimmune disorders often appear after a viral infection of some kind such as a cold, flu or mononucleosis. This may suggest viruses “gets things rolling,” as Schafer puts it, and somehow cause an aberration in the immune system. Smoking, diet and stress also are being considered as possible triggers.
“But for an individual attack, by and large, we really just don’t know,” says Schafer, who is echoed by his colleagues in other specialties. “If you’re sleep-deprived because of stress, if you smoke, your autoimmune system is not able to be at its most effective,” says Sallie Adams, M.D., an endocrinologist for Sutter Medical Group. “Although it’s hard to say: I have patients with a completely relaxed lifestyle, [non-smokers], who develop a thyroid disorder.” Butani concurs: “We see patients with no obvious trigger at all.”

This conundrum leads naturally to the idea of whether triggers—or the disorders—can be avoided, a debate with two conflicting sides as well. “There’s the idea that anything that strengthens your immune system may help,” explains Adams. “So that’s things like exercise, vitamins C and E, fruits and vegetables.” And the other side? “It is valuable to have a good immune system to fight viruses and bacteria,” says Okimura, “but in autoimmune disorders, you have an overactive immune system that attacks its own body systems. So do you really want a strong or superstrong immune system? Maybe a weaker immune system would be [less likely to overreact].”

Another area of controversy is whether or not autoimmune disorders are on the rise, and if they are, why that might be. Here again, medical opinions can be as diverse as the disorders themselves.

“We’re exposed to so many foreign invaders, and if the body is trying to protect against these invaders, but it makes a mistake—and there are so many more environmental toxins, pollution, additives in food now,” says Adams, “anecdotally, it makes sense [this is having an effect]. But for an epidemiologist, it’s hard to say that for sure. The science just isn’t there yet.”

There also is—again, conversely—the “hygiene hypothesis,” which centers around the idea that modern, industrialized countries are much more sanitized. “We don’t encounter serious diseases, aren’t exposed to as many foreign invaders, at a young age,” explains Okimura. “I’m not necessarily a proponent of this theory, but what it suggests is we may have a more robust response—our immune systems may overreact—when we encounter things later in life. But this is not proven; nobody knows.”

Science can tell us a couple of things, however. First, certain populations are more prone to certain autoimmune disorders. “We are seeing an increase . . . in the numbers of kids and teens with lupus,” says Butani, “because of an increase in the immigrant population—particularly Asians, and specifically Hmong—in California.”

Second, because diagnosis and treatment are better now, more patients are being identified with autoimmune disorders. “I don’t think there’s an increase in people having [MS]; there’s an increase in recognition of the disorder,” says Schafer. For instance, an MRI now confirms an MS diagnosis, and blood tests—those that identify specific antibodies—can diagnose other autoimmune disorders. This differs from the past, when biopsies or autopsies were the way these diseases were found.

“Twenty years ago, if people died in a hospital, it was routine to do an autopsy,” Schafer says. “And it was well-known [then] that many people were found to have MS, but they’d never known they had it.” Even further back in medical history, according to Schafer, treatment for MS was so poor, it was almost unkind to tell patients with mild symptoms they had it—there was nothing to be done about it anyway.

Medication and treatment for most autoimmune diseases are more effective, with fewer side effects, than ever before. Early detection also is allowing earlier treatment, changing the course of the disease. “It’s increasingly important to start MS treatment as soon as someone develops symptoms—to prevent subsequent attacks,” says Schafer, because each attack causes further damage, and recovery each time is more difficult.

Similarly, certain autoimmune disorders now can be treated so the disease either remits, in the case of thyroid disorders, or can be managed, as in the case of, say, celiac disease, where a gluten-free diet returns people to otherwise normal life.

Finally, experts across specialties believe research someday will pinpoint the causes of these diseases. “We have great hope for the human genome studies,” says Okimura. “It may help us identify people who are predisposed to these disorders.” Once identification is made, it might be possible to intervene early—say, with a vaccine—to prevent the disease from being triggered at all.

Current research also focuses on developing more disease-specific drugs, delivering them in less invasive ways (such as insulin in an inhalant form), and repairing damaged body systems, such as the pancreatic cells in diabetics or the myelin in MS patients. “That would be huge,” says Schafer.

Factoid: John F. Kennedy had auto-immune disorders. He was diagnosed with Addison’s, but also may have suffered from celiac disease and had documented symptoms that seem to suggest this diagnosis. His health improved dramatically when he became president and began receiving better treatment for these conditions.  Kennedy was in the best physical shape of his life when he was assassinated.