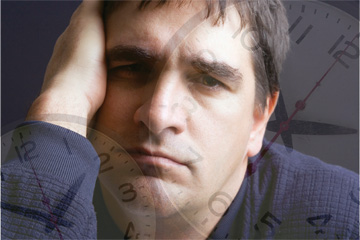 Being more injury-prone is just one of many unwelcome surprises midlife has brought to 51-year-old Travis. Fatigue, decreased muscle strength, sleep disturbances and deteriorating eyesight also are on the Fair Oaks resident’s list of complaints.

But he’s not sure if he would call it menopause.

I don’t know if there’s such a thing as male menopause, he says. But if it means some things get more difficult and you feel like you’re running out of time, then . . . yes.

Travis isn’t the only one who hesitates to hang a name on the midlife transition commonly known as male menopause. Doctors tend to haggle over the term, too, preferring instead the more clinical andropause (decline in androgens), ADAM (androgen deficiency in the aging male) or hypogonadism (testosterone deficiency).

But call it what you will, the facts are undeniable: Men go through a hormonally based change of life just as women do. Although it happens more gradually and lacks the clear-cut demarcation of the end of menses in women, the result is much the same: a major life passage with physical, psychological and interpersonal dimensions.

At the root of this complex web of changes is the big T: testosterone, the male sex hormone. According to John E. Gould, M.D., Ph.D., associate clinical professor of urology at UC Davis Medical Center, men’s testosterone levels generally decrease 1 percent per year beginning at age 30&emdash;a decline associated with reduced interest in sex, erectile dysfunction, decreased bone density, reduced muscle strength, depression and a host of other symptoms. (Some men even experience hot flashes.) Gould hastens to add that an estimated 4 to 5 million American men suffer from testosterone deficiency (hypogonadism), yet most remain untreated. Only 5 percent are said to receive treatment, says Gould. I think it’s clear we could be helping more men.

But testing and treatment can be tricky, say doctors. Testing methods are not standardized, rendering unreliable results. Of greater concern are studies linking high testosterone levels to an increased risk of prostate cancer.

Testosterone treatment is not benign, notes Louis Giorgi Jr., M.D., a urologist with Mercy Medical Group. With proper screening, testosterone replacement does have a role, and there are men who can benefit from it. But it’s not for everyone, and it’s not a panacea.

It’s also not necessarily an answer for men experiencing impotence, a problem Giorgi sees in many of his patients. There are no studies correlating erectile dysfunction with testosterone, he says. A man can have normal erectile function and have a low testosterone level, or vice versa.  But because testosterone is a great libido-lifter, it can potentially play a supplementary role in improving erections.

A combination of Viagra and testosterone is often the most effective antidote for men with sexual performance issues, adds Abdo Faddoul, M.D., a urologist with Sutter Roseville Medical Center. If a patient has low testosterone levels, testosterone will absolutely improve his desire for sex, and Viagra will help with the erections, he says. Many patients, he says, are on both.

While sexual dysfunction is not the only problem men may confront in midlife, for many it is the most troubling. Most men attributed erectile dysfunction to be the most significant event of the andropause for them, writes Robert S. Tan, M.D., a recognized expert in the field of aging andrology and author of The Andropause Mystery: Unraveling Truths About the Male Menopause.

But men should look beyond their hormones to uncover the reasons behind their erection problems, says Louanne Cole Weston, Ph.D., a board-certified sex therapist in Fair Oaks. The penis is the barometer of a man’s circulatory and cardiovascular health, says Weston. Cigarette smoking and excessive alcohol use can contribute to erectile dysfunction, she adds. Some men aren’t willing to take a good look at their overall health. It’s really important to persuade them that their overall health is important to their sexual health, and vice versa.

Sutter’s Faddoul concurs, noting that many chronic diseases, including diabetes, high-blood pressure and depression, can play a role in sexual dysfunction. Some of the medications used to treat these conditions also can be implicated, as can pain medications. In people who are on pain medication for a long time, the majority will have low testosterone, says Faddoul. I see this often.

But physical causes are only part of the story. Stress and anxiety are also common culprits. Frequently, sexual dysfunction is the obvious physical manifestation of a dysfunctional relationship. How a man describes his relationship gives me a clue as to whether there are underlying relationship problems underlying sexual desire, says sex therapist Weston. If a man doesn’t characterize his partner as difficult or unreasonable, Weston says, she knows it’s time to look for other causes, which may or may not include low testosterone.

But the first step is getting men to talk, period&emdash;and that, not surprisingly, isn’t easy. In a 2006 study commissioned by the Alliance for Aging Research, 62 percent of the men surveyed said they are uncomfortable discussing health conditions such as low testosterone with their doctors because it is embarrassing.

Men are generally reluctant to talk about things like impotency or other signs of aging, such as balding, says Tom Zinkle, Ph.D., a psychologist for Kaiser Permanente. While getting older isn’t a picnic for anyone, Zinkle observes that men tend to have a harder time accepting the aging process than women do.

The losses of sexual power, hair, physical strength and stamina that often mark the male menopausal passage add up to what some experts call a male potency crisis&emdash;a phenomenon that can lead men to try desperately to turn back the clock, often with disastrous results. The classic example is the man in his 50s who replaces his wife of 20-plus years with a younger model, but the desire to stay forever young also can show itself in more subtle, sometimes humorous, ways.

I know one psychologist in his 50s&emdash;me&emdash;who recently went skiing when he was horribly out of shape and really paid the price, shares James Cooper, Ph.D., a licensed psychologist in Sacramento. You see, when you are 25, there isn’t quite the same need to think about these things.

Cooper, who has treated many men in the prime midlife years of 40 to 65, urges men to look at their psyches, not just their bodies, to understand the often baffling constellation of changes they may be experiencing. While there are universal physical changes attributed to testosterone decline, I hasten to add that the subjective and interpersonal changes occurring in men in this age group appear to be poorly correlated with a decline in testosterone alone, says Cooper. Men are, indeed, more than their hormones.

For the most part, he says, men tend to identify a cluster of complaints that bring them to treatment in midlife, which may include fatigue, relationship problems, anger, anxiety, depression, irritability, sleep disturbances, erratic moods and memory struggles.

It’s not all about sex, notes Cooper&emdash;a statement confirmed by the two men who agreed to share their menopausal stories.

Travis, the 51-year-old who reported an array of symptoms ranging from decreased muscle strength to sleep disturbances, says he’s fine on the sexual issues. But, he says, he’s troubled by thoughts about his aging parents, worrying more about financial investments and unsettled by the notion that he’s running out of time.

Don doesn’t mention any sexual problems, either. But at 39, he’s already experiencing some of the classic midlife swings, including fatigue, heightened emotional sensitivity and reduced endurance. I can do a lot less, physically, than I could 10 years ago, says the El Dorado Hills resident. True, he’s recently married with a new baby, which he concedes may play a part. But he also believes male menopause is a real condition, and speculates that declining testosterone levels may already be affecting him. Says Don, I’m not sure if my symptoms are due to male menopause, aging or stress.

All he knows for sure is that he’s changing.

Clearly, one of the key challenges of male menopause is learning to accept the fact that one is getting older&emdash;and accepting the losses that go along with it.

But men have a particularly hard time with this, says Zinkle, thanks partly to societal conditioning that says men should be forever virile, vital and strong, not to mention successful in the workplace. Men who have lost their jobs, he says, are particularly vulnerable. I’ve seen a lot of men in therapy who have been downsized, so they no longer feel powerful, says Zinkle. For them, it’s â€˜what’s the purpose of my life if I can’t run a company?’

A redefinition of manliness may be the single most crucial element in smoothly navigating the murky waters of midlife, suggests Zinkle. Men who are flexible enough to realize it’s no longer just about their rugged individual powers and who become more service oriented, more family oriented and community oriented will do a lot better during this passage.

Different, yet Intertwined&emdash; Male menopause (also called andropause) refers to the physiological phenomenon that occurs as hormonal levels decline in men and the physical and emotional changes that may result. Midlife crisis, while a separate phenomenon, can occur alongside or as a reaction to the menopause, blurring the lines between the two.

Men, Don’t Be Shy: Talk to Your Doc&emdash;

Talking to your doctor about erectile dysfunction, loss of libido or depression may not be something you want to do&emdash;but you should. Nowadays, we have something for everything, says urologist Abdo Faddoul, M.D., of Sutter Roseville Medical Center. People who are having problems with sexual activity or other symptoms that don’t make sense to them should disclose them to the doctor. It should no longer be in the closet.

But where to start? Experts interviewed for this article agree that the place to begin is with your primary care doctor. If testosterone levels are low or low-normal, additional investigation to rule out other causes (such as pituitary disease) and/or a referral to a specialist (endocrinologist or urologist) may be advised.

Male Menopause: Coming Soon to a Theater Near You?

Actress and filmmaker Rosanna Arquette announced this past August her plans to make a documentary on the subject of male menopause. In an article on the entertainment website starpulse.com, Arquette shared her point of view: Women are always the ones blamed for having the symptoms of menopause, when the fact is a lot of men go through menopause, too. It’s called â€˜manopause’ and comes about when men start losing testosterone.