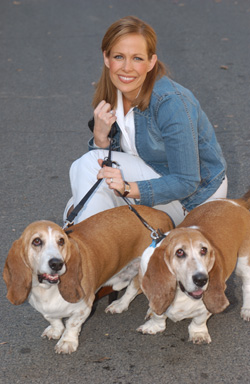 There could be no better way to reincarnate than to come back as one of Diana Penna’s extremely spoiled pooches. Like Coco, you could be immortalized on Santa’s knee in framed splendor, climb a pillow staircase to reach the sofa, and spend your days in leisure chasing hockey sticks and flying champagne corks. Like Locquito, you could expect to be carried home if you got tired running with “Mama” near her 21-acre Shingle Springs property. “It’s sickening,” Penna says. “But they’re like children. There’s so much love. It just makes life so full and complete.”

Del Rodgers grew up with dogs, but insists, “Rabbits are less aggressive and more fun.” Rodgers enjoys puttering in his backyard garden as Snickers and Mocha hop among the cornstalks. “Watching them in the garden gives me peace and calmness. That’s my release,” Rodgers says. Although the rabbits live in an outdoor pen, they are house-trained—eliminationwise, at least. “We had them in the house until last year,” Rodgers says. “They chewed up the electrical cords.”

Fourteen years ago, a dirty, scrawny stray kitten with oversized ears sauntered into a Las Vegas television studio where Marianne McClary was anchoring the news. It  was love at first sight—and more than a decade later, Yoda still is McClary’s main man. “He’s lasted longer than any boyfriend,” says McClary, a lifelong feline fanatic.

Few boyfriends could get away with demanding breakfast at ungodly hours. But Yoda can. Says McClary, “If I could change one thing, I’d have him sleep in on the weekends. On weekdays, I get up at 3:30 [a.m.] and go to bed at 7:30 at night—and so does he. On weekends, he still expects to eat at 4 a.m. I get up and feed him because there’ll be no rest ’til I do. In a battle of wills, I always lose.”

Cats are agile, people are klutzy—that’s how the story usually goes. But chez Schreivogel,  the situation is reversed. Here, the people seem to float on air while one of their cats, Kooga—blind in one eye—bumps into objects with Mr. Magoolike regularity. A couple of years ago, Ben, then single, adopted Kooga from a shelter knowing the kitten had lost vision in one eye after being mauled. Then the “good” eye went bad, and the newlyweds (who met at work and were married this past June) faced their first big expense together: a $1,100 veterinary eye-surgery bill. Now Kooga can at least see to bat a paw at Pantha, who, when she’s not tussling with her pal, usually can be found atop a pile of fresh laundry. Some day, the Schreivogels hope to add to their “family”: maybe a dog and a couple of tortoises. “I’d like to have a mini zoo,” says Ben, an Animal Planet channel devotee and former owner of a 6-foot Burmese python.

Whether they’re subjected to hot new reality shows, lukewarm election coverage or really bad sitcoms, Rick Kushman’s couch-potato buddies, Porter and Harvey, are blissfully oblivious. “They don’t respond to TV. It might be that they have good taste,” Kushman says. Because Kushman’s hectic lifestyle didn’t jibe with dog guardianship (he works crazy, long hours at The Bee and, as a nationally ranked middle-distance runner, runs crazy distances), he and some equally busy friends came up with a solution: shared canine custody. (One dog, two households, zero “Judge Judy” appearances so far.) Living with Kushman and his wife, Deborah, on a full-time basis is 15-pound Harvey, who requires twice-daily insulin shots, but then is rewarded with a treat.

Police Chief Albert Najera’s dog, Joey, never will be K9 material—not when he behaves like a Welcome Wagon hostess, rarely barks and permits neighborhood cats to eat out of his bowl. “He can’t even chase off cats,” Najera says in mock disgust. As far as doggy lifestyles go, “he’s pretty much hit the lottery,” says the chief. That’s because Joey has 2.5 country acres on which to roam, receives presents for Christmas, and gets to dog paddle in the family pool. He earns his keep by sniffing out gophers. And melting hearts.

Immediately upon receiving two basset hound puppies as a wedding present, Chris Lane and her husband, Scott, had the perfect name for one. That would be Lucy—after Lucille Ball, the famous, mischievous redhead. Lane says Lucy instigates all manner of devilment, from shredding an entire roll of paper towels to snatching their 3-year-old daughter’s food off her plate. Lucy has even been known to bark incessantly at the sight of a headless, chewed-up Barbie doll. (Don’t ask.) By contrast, Lane describes Elliott as “mellow and sensitive.” Lane adores these hounds. Must be their Jell-O bellies and pleeeease-don’t-be-mad-at-me eyes. “They’re such lovebugs,” she says. “They stink and their slobber is disgusting, but it’s a small price to pay.”