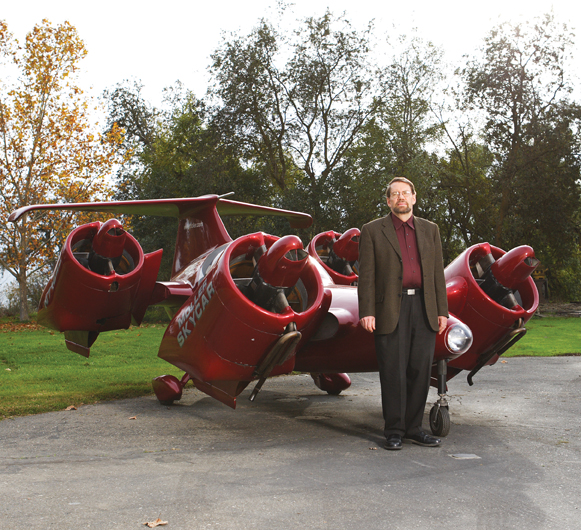 Meet a local inventor with some high-flying ideas.

Every life has a turning point that determines which road a person ultimately will travel. For inventor Paul Moller, president of Moller International, Inc., his seminal moment came at the tender age of 4 when he first saw a hummingbird hovering in flight. He became so fascinated with the idea of vertical flight that he dedicated his life to building the word’s first mass-produced flying car.

Moller, 70, a former UC Davis engineering professor, has invested more than 40 years of his life into getting his Skycar project off the ground. He has built numerous prototypes during that time, from round UFO designs to his latest model: a jet-sleek red beauty with folded wings and four seats, dubbed the M400 Skycar. He admits the process has at times been frustrating, but also contends that he never really considered more mainstream alternatives to feed his flight fixation.

“People have often asked why I didn’t become a pilot,” Moller says. “But I’ve never had any fascination with being a pilot. It’s like looking at a hummingbird and then looking at a pelican. For a pelican to take off, he runs down the runway for a while before he can get airborne. I have no desire for that kind of flight.” On the other hand, he says, “The hummingbird is sort of a symbolic example of what I would love to be able to do. It offers a degree of freedom that, if air wasn’t so light and we weren’t so heavy, we’d be able to utilize every day.”

Vertical takeoff and landing, or VTOL, flight is itself not unique. Helicopters, for instance, have been commonplace since the 1950s. VTOL moved full time into the jet age in the 1980s with the development of the Harrier Jump Jet, used by both British and American military forces. But to date, the challenge of creating a VTOL vehicle that is efficient, safe and affordable enough to send the average commuter soaring high above freeway traffic jams has remained a flight of fancy. It remains so for Moller, but one that is getting closer to becoming a reality.

The Building of a Builder

You might say that as a child Paul Moller took precociousness to extremes. Raised on a chicken ranch in a remote part of British Columbia, he began building things almost as soon as he could walk. Using scrap lumber he found around the family farm, he built his first house—about the size of a utility shed—when he was just 6 years old. He build his second home when he was 9, and by 11 he had built a Ferris wheel that could hold four people, which allowed him to simulate the experience of flight he so desired. By 15, he had graduated to building his own car, a sporty two-door model with automatic doors and a Plexiglas windshield.

None of this, Moller admits, would have been remotely possible without equal parts encouragement and tolerance from his parents. “They allowed me a degree of freedom that none of my friends enjoyed,” he recalls. “In fact, I don’t think I’ve ever met anybody in my life that was given the sense of, I don’t think you can call it self-worth, but self-reliance they gave to me.”

He notes that his father also learned early on that his son’s need to build things was more blessing than curse. “The house I built at 9 was a good solid-beamed house with a roof and tar paper,” he says. “It had two rooms that my father used to store stuff for many years after I left home.”

For all of his mechanical creativity, Moller was a mediocre student who never envisioned himself going to college. After graduating high school, he went to a trade school to study aircraft maintenance and engineering. That eventually led to a steady but unfulfilling job at an aircraft company in Montreal. Bored, Moller enrolled in several of “the toughest graduate courses that I could find in an area I knew nothing about, just for fun.” The coursework—chemical engineering and applied mathematics—was grueling, but Moller was so energized by the ideas he was being exposed to that he began spending whatever free time he could cobble together working on an engine design that would eventually become a key component in his early Skycar prototype.

Now wanting more education, Moller applied to the undergraduate engineering program at McGill University in Montreal, an iffy proposition for someone with a marginal high school academic record and just a few night courses under his belt. But in an act of what Moller calls “destiny,” he had a chance meeting with a McGill professor who, unbeknownst to either of them, was already working on the same engine design Moller was constructing in the living room of his tiny apartment. That initial conversation developed into a friendship. Soon, strings were pulled that allowed Moller to bypass undergraduate work altogether and move directly into the university’s prestigious graduate program. He didn’t waste the opportunity: Within three years, Moller had earned both a master’s degree in engineering and a doctorate in aerodynamics.

He also did not waste much more time in Montreal. Itching for a warmer climate, he and his first wife moved to Davis, where he got a job teaching engineering at the University of California. It was while at UC Davis in 1964 that Moller began to actually move his flying car from concept to reality.

It has been a bumpy ride. Moller has, in fact, generally been far more successful at other, more lucrative moneymaking endeavors, all of which he has used to fund his Skycar. In the early 1970s, he also developed a high-performance motorcycle-muffler system that became one of the best-selling products of its kind in the world. He has made millions in real estate development projects like the Davis Research Park where his current offices are located and is expecting to do similarly well with his impending redevelopment of the historic Milk Farm property just off Highway 80 near Dixon. “I feel like the farmer that inherits $2 million and is excited as hell because now he can farm for another 10 years,” he says of the $100 million he estimates he has poured into the Skycar. “It doesn’t make a lot of sense from an entrepreneurial basis, but it has always made sense to me because I was so committed to the goal.”

Still, Moller admits that both he and the Skycar are definitely works in progress. He is by all accounts a man of physical and emotional extremes, übercompetitive and prone to ill-temper. Moller spent much of his younger days channeling some of his competitiveness into racing go-karts and motorcycles—something his second wife, Vicki Schlecter, says led to more than a few bad accidents. She says he carried that same fearlessness into everything he did, often with the same injurious results. Schlecter says Moller’s propensity for getting hurt was so great, any time he started a project, she would immediately get dressed and ready to take him to the emergency room. Throughout the years, Moller says he has broken most of his major bones, including his neck.

Schlecter, who is now divorced from Moller, says that while he can easily “just laugh and go on” when confronted by skeptics, he can just as easily lose his temper with others “who don’t immediately understand what he is talking about.”

“He is a genuine rocket scientist, and I really respect him for following his dreams,” she says. “But his temper makes him very hard to work with.”

Justin Blumetti, 24, an engineer who came on board with Moller fresh out of college, agrees that his boss’s temper can be a challenge, but adds, “I also think that without that temperament, he would not have been able to accomplish what he has accomplished.”

“I’m a guy who gets hot and cold really quick,” Moller admits. “I’m nowhere near as tolerant a person as I would like to be. It is a weakness in my character and I am trying to get better at it.”

He also is still working at making the Skycar better, although his enthusiasm there still costs him once in a while. In 2003, for instance, the Securities and Exchange Commission filed suit against him for selling unregistered securities, in essence accusing him of misleading investors into believing the Skycar was much further along in its evolution than it was. But now that the M400 is ready to begin official test flights, he says the company also has connected with a foreign partner that would allow for the M400’s engines to be mass produced at a plant in Eastern Europe. Still, the Federal Aviation Administration ultimately will need to sign off on the M400’s viability, a process that could take years.

Moller appears undaunted at the slow pace of getting the Skycar off the ground. He says growing traffic congestion, poor roads, longer commutes and improving technology will eventually make his dream a reality.

“When it becomes something everybody needs, everybody will have it,” he says.