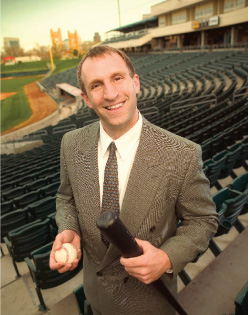 On a chilly day in late January, Johnny Doskow surveys a hibernating Raley Field from the wide window of his broadcast booth above home plate. The scoreboard is blank, the seats are empty and the grass on the field glistens from the morning’s fog. The Sacramento skyline rises in the east like a painted backdrop for a much-anticipated play.

As Doskow talks about life as the “voice of the River Cats,” he’s doing what he does best: creating a picture of something the eyes can’t see, won’t be able to see until baseball season starts in April.

Hearing him talk, I can almost smell the hot dogs, hear the clean thwack! of bat meeting ball, and feel the roar of 11,000 fans welcoming back the 2003 Pacific Coast League champions.

Doskow describes one fan in particular who shows up only once or twice a season. Oblivious to the cheers around him, this fan sits quietly, ears sandwiched between the headphones of his Walkman, listening to Doskow calling the game on Talk 650 KSTE on the AM dial, the English-language radio home of the River Cats.

Even without looking—he can’t look or he’ll become too emotional—Doskow knows this fan is listening; in fact, this fan is the reason Doskow is here at all. As any great play-by-play announcer knows, there’s something about baseball that transcends the game itself, becoming a metaphor for life and universal truth.

This moment that Doskow describes is a perfect example—and this particular fan is a perfect symbol—of all that is sacred about baseball.
It’s his dad.

For 37-year-old Johnny Doskow, baseball always has been about the father-son relationship. His father, Charles Doskow, a baseball connoisseur since his childhood in New York, remembers taking the subway—alone—at age 8 or 9 to catch a Yankees or Giants double-header. He would leave at 10 in the morning and come back at 10 at night.

Today, Charles Doskow is a professor and dean emeritus at the University of LaVerne College of Law in Southern California. His son describes him as taciturn and analytical—the complete opposite of himself.
“Baseball,” Doskow says, “is the one thing my dad and I have in common. A lot of times, that was our only connection.”

The Doskow family lived in Hollywood until Doskow was 12, then moved to Claremont, where Doskow’s parents still live. Doskow recalls, “I grew up in a family where the first thing you see when you walk in the door is a bookcase full of baseball books.”

Growing up listening to legendary broadcasters Chick Hearn of the L.A. Lakers and Vin Scully of the L.A. Dodgers, young Doskow used to go around the house with a pencil-as-microphone, “interviewing” his parents and older brother and sister.  It wasn’t long before he was doing his own play-by-play.

John, as he’s been known for most of his life (he didn’t become “Johnny” until age 31, when he was broadcasting for the Fresno Grizzlies and the top brass decided Johnny had a better ring to it), played Little League and high school baseball, but says his talent stopped short at the college level.

“Then I realized I could talk a good game, but that was kind of the limit,” he says.

While in college at the University of LaVerne, Doskow got the chance to test his broadcasting skills at the campus radio station. He received his bachelor’s degree in communications in 1990.

After graduating from college, Doskow sold cable TV door to door before landing a job in January 1991 with a group of radio stations in Charles City, Iowa.  Broadcasting everything from boys’ wrestling and girls’ softball to crab races and hog-market reports, the young man from California received a fast education on Midwestern culture, not to mention the brutal Iowa winters—all on a salary of $1,100 a month.

But Doskow hung in there and two years later was chosen to be the radio announcer for the Cedar Rapids Kernels, the Class A affiliate of the Anaheim Angels.

“In October of ’92, I sent them a tape. They said, ‘If you can sell $30,000 worth of radio advertising between January and April, then you can broadcast the entire 140-game schedule.’ I was so nervous; I wasn’t sure I was going to make it. There were a couple of big accounts that came in at the end that put us over the $30,000 mark,” he says.

Doskow stayed with the Kernels for three years before moving back to California to take a job in Victorville with the High Desert Mavericks, then the Class A farm club of the Baltimore Orioles. In 1998, he accepted a job with the Fresno Grizzlies, the San Francisco Giants’  Triple-A affiliate. Doskow moved to Sacramento in 2000, replacing Jeff Walker as the Voice of the Oakland A’s’ Triple-A Sacramento River Cats for the 2001 season. “It was a step up in my career, there’s no question in my mind,” he says. “This community, the way they came out and supported this baseball team—it’s almost magical. I am grateful to [River Cats owner] Art Savage, along with [executive vice presidents] Bob Hemond and Warren Smith, for bringing baseball to Sacramento. To be able to see this place packed during the week . . . it wasn’t too long ago that I was in Burlington, Iowa, with only 150 people in the stands. I never take it for granted. Broadcasters from other clubs tell me how lucky I am to have that much energy around me every single day of the week.”

During baseball season, Doskow adheres to a relentless schedule, broadcasting 144 home and road games in 153 days. Never married (although he believes he’s finally found a woman who can put up with his crazy schedule), he tells his close buddies, “If you’re going to get married and want me to attend the wedding, don’t get married in the summer.”

Emphasizing the importance of “the dailyness of baseball,” Doskow says he’s missed only one game due to illness in 11 years of broadcasting. Like chapters in a book, each day of baseball builds on the last, making continuity an essential aspect of the job.

“I feel like I have so much more to learn,” he says. “I literally learn new things about the game every day.”
All sportscasters, especially the great ones, inject into their broadcasts pieces of their personality, and Doskow is no different. His signature expression is “Holy Koudelka!”—a throwback to his Iowa days.

He shrugs. “I just fell in love with the name Koudelka, a Czech name from Iowa. It kept coming out of my mouth. When the Kernels won the Midwest League title in 1994, they put ‘Holy Koudelka!’ on the Holiday Inn marquee.”

Regular listeners of Doskow’s broadcasts also know about his phobia: the flapping of birds’ wings. Every night around 7:15 (“It’s like clockwork!” Doskow swears), flocks of birds descend on Raley Field, swerving precariously close to the broadcast booth.  Doskow’s listeners might then hear something like this: “The 2–2 fastball pitch misses hiiiiigh—and that bird came awfully close to landing in this booth!”

Other than that, Doskow pretty much talks a straight game, which he believes fans appreciate. “I feel I owe the listeners a straight game. I might include a few little funny things here and there, but my first priority is making sure the listener knows exactly what’s going on in the baseball game,” he says.

Whatever he’s doing, it works. Baseball America named Doskow one of the top 10 minor-league broadcasters during the 1999 season. But Doskow is quick to point out that it takes a team to make a successful radio show.

“The Clear Channel [Communications] people (KSTE’s owner) have been so great; they’ve made my job a lot easier. The engineer and board operator have a genuine interest in making the broadcast sound good.”
Good enough for Dad?

“He’s not much for compliments,” Doskow says. Yet one of the greatest compliments Doskow claims to have received came from his father, who once said, in his typical concise fashion, “I always know what’s going on in the game when you’re calling it.”

Charles Doskow, who despite his love of the game never prodded his son toward a career in baseball (he wanted Doskow to become a police officer), admits that’s true. “He’s very professional, really. He does the game. He’s not talking about 10 other things; he’s talking about the game.”

Doskow couldn’t ask for much more, except to know that somehow, somewhere through the sound of his voice, another father and son are bonding over the great game of baseball.