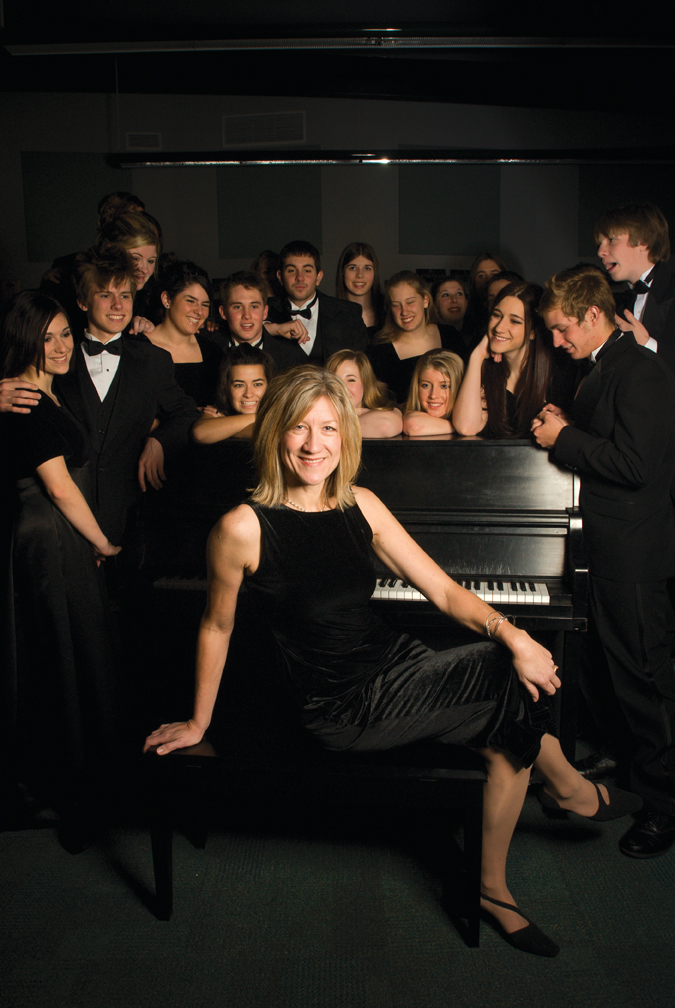 After years of coaching singers, this Granite Bay choral director is hearing her own praises sung.

But no one believes it—not for a minute.

In her 11 years as choral director at Granite Bay High School, Leighton’s choirs have consistently taken firsts at festivals and competitions. This past year, her madrigal choir won the prestigious Adjudicator’s Award at the Heritage Music Festival in Anaheim. And on March 30—which just so happens to be her 44th birthday—Leighton will receive the latest in a long string of music educator awards as part of the JAMMIES Evening of Classical Music at the Mondavi Center in Davis.

All of which prompts the question: How can one be “mediocre” and yet meet with such extraordinary success?

If you ask Leighton, the answer is simple: It’s all about people skills—which, even when you’re a music teacher, matter more than being a veritable virtuoso.

“If anything drives my success, it is my people skills—my ability to relate to kids very easily without becoming one of them,” she says. “I think they enjoy me, but they also respect me, and I respect them.”

Tall, slim, posture-perfect and crowned by a crop of blond-streaked hair, Leighton is a commanding presence whether directing a choir or sitting for an interview. Sitting, however, isn’t something she does very often. As a wife and mother of three, she is as fiercely devoted to her family as she is to her work—a precarious juggling act under any circumstances, but especially for one so hard-wired to excel. “It’s hard for me to say, ‘You know, you don’t have to give 150 percent all the time,’” admits Leighton, who draws fuel from faith, caffeinated iced tea and Diet Coke. “I multitask way too much. I overdo it.”

Her husband of 18 years, Dave, couldn’t agree more. “She cares too much sometimes,” he says. “She doesn’t do anything halfway. I’ve often told her that if she had a job flipping burgers, she’d be consumed with flipping the best burger around.”

Leighton isn’t sure how she got this way, though she suspects it has something to do with birth order and temperament. The oldest of three siblings, Leighton grew up in El Dorado Hills and always did well in school, shining especially in sports. She played volleyball and basketball and ran track throughout her four years at Ponderosa High School, where she also held a record for hurdles. “I think the coordination I learned through sports has helped me quite a bit with [choral] directing,” Leighton says.

But a career in music, at the time, was the furthest thing from her mind. With her athletic ability and love of sports, she long-dreamed of being a coach. Even when she discovered her strong alto voice, she never saw her future in music. “I didn’t even join the school choir until my junior year, and I had no idea I could sing,” she says. “But when people started saying, ‘Stand by Jen—she’s got the part,’ I knew.” Although she found choir a “great experience” and even earned a voice scholarship to Whitworth College in Spokane, Wash., she still planned to coach.

Her watershed moment came circuitously, as they often do. While watching a film about school administration during a “boring” economics class, a light bulb went on. “I ran to my counselor at Whitworth and said, ‘I know what I want to do . . . I want to be a school administrator.’ And he said, ‘Well, you’ve gotta be a teacher first.’ And I said, ‘Well, OK, what are the shortest majors?’ And he said English and history. So I figured, well, I’ve always done really well in English, so let’s do English.”

Emerging with a bachelor’s degree in English and a minor in voice, Leighton returned to her home state (“I was really homesick”) and began the arduous process of fulfilling requirements for a California teaching credential. (“I always tell my students to go to school in the state in which they plan to teach,” she says. “Reciprocity is a joke.”) In her first teaching job, a 10-year stint at Oakmont High in Roseville, Leighton taught both English and choir; in time, her true calling made itself known. (Hint: It wasn’t English.)

“Teaching choir, working with an innate talent like singing, is very different from teaching English,” she says. “With music, your voice is your body, so it’s a much more personal kind of work. With English, they (students) can distance themselves from the work a lot more. . . . and sometimes you only have them for one semester.” But her choir students often stay with her for all four years, Leighton says, allowing her to develop closer relationships with them and, potentially, have a greater impact on their lives.

At Granite Bay, Leighton has the opportunity to do what she loves best: teach choir full time. She’s been there since the school opened in 1996 and, according to former Granite Bay principal Ron Severson, was the foundation for the performing arts program that exists today. “Jennifer is a tireless worker who sets huge expectations for herself and her program,” says Severson. “But she also has a unique ability to make the experience fun.”

Severson also praises Leighton’s ability to inspire students, helping them to grow not only as musicians, but into mature young adults. “Her students get great technical training. But it is the change in their self-confidence, their work ethic and their expectations that is most impressive.”

Morgan Anderson, a Granite Bay senior and a choir member for eight semesters running, credits “Mrs. Leighton” for helping her to tap into leadership potential she didn’t know she had. “I knew I could sing well, but I always thought of myself as just a background person in the choir,” says Anderson. When Leighton encouraged her to apply for the position of choir president, Anderson was stunned. “When she told me people admire me and look up to me, and that I lead by example, I was like, ‘Really?’” Anderson is now serving a term as choir president—an experience she calls “a great confidence booster.”

Fostering leadership is hugely important to Leighton, who routinely appoints student directors (such as Anderson) and mentors them in the art of choral conducting. “The whole leadership aspect is really big with me,” she says, admitting it is one of the things that distinguishes her as an educator. “It’s something you may not see with other teachers or other programs.”

Another thing you may not see is the rich diversity of music Leighton chooses for her choirs. (There are several, from beginning to advanced, plus madrigals.) At any given performance, you’re likely to hear music you know (depending on the season, it could be Handel’s “Messiah” or a Beatles medley) alongside obscure ethnic music and works from such young composers as Eric Whitacre. “I love songs that make an impact—that do something the audience isn’t expecting,” Leighton says. But mostly, she says, she picks songs that “really, really speak to me. If I’m passionate about it, I figure my kids are going to be passionate about it and so will my audiences.” While she’s wide-open to most music, she says, there’s one thing she can’t stand: schmaltz. “If the words are corny or trivial,” she says, “I just can’t do it.”

And if she has one regret, Leighton says, it’s being away from her family in the evenings, when rehearsals and performances take up her time. “But when you’re in the performing arts,” she says with a hint of resignation, “there’s really no way around that.” She compensates by spending as much time in the afternoons with her kids—Nick, 16, Arielle, 13, and Emmery, 11—as she can, providing parental taxi service to music lessons, orthodontist appointments and the like.

She’s also coached their soccer teams, fleetingly living out an old dream. But, as she points out, being a choral director—Leighton-style, at least­—is a lot like coaching.

“I’m not your delicate-flower music teacher,” she says with a smile. “It’s pretty much, ‘All right, everyone, stand in line. We’re leaving to the count of five . . . ’”