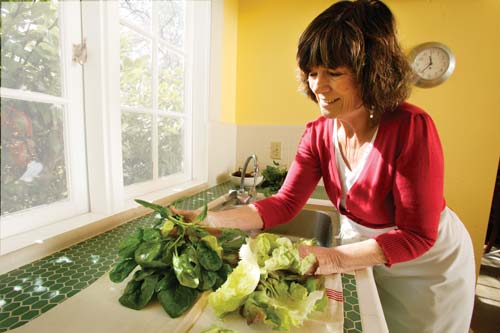 A peek inside the Winters home of famed cookbook author Georgeanne Brennan.

In the past two decades, award-winning food writer Georgeanne Brennan has cooked up more than 30 books in the homey kitchen of her farmhouse in Winters.

It is a cook’s kitchen, built for efficiency and efficacy rather than for show. From its battered butcher-block island to its mismatched, aging appliances, it’s clear Brennan doesn’t buy into the notion that a kitchen must bristle with stainless steel and granite to be worthy of the name.

This humble kitchen, she says, “really works for me.” Here, with sunlight streaming through ample windows onto a worn oak table, Brennan tests recipes for her highly regarded cookbooks, including The Food and Flavors of Haute Provence (Chronicle Books, 1997), which won a James Beard Foundation Award, and Aperitif: Recipes for Simple Pleasures in the French Style (Chronicle Books, 1997), which nabbed a Julia Child Cookbook Award.

Brennan and her husband (her second) bought the century-old house, and the 10-acre farm it sits on, 20 years ago. By then, Brennan had begun to make her name in the food world: first as the co-owner of a mail-order vegetable seed company that was written up in Vogue and The New York Times, then as a newspaper food columnist.

She has always led a food-centric life. “I grew up in the kitchen,” says Brennan, a Southern California native who loved to watch her mother cook. In college, Brennan studied for a year in France, where she discovered “a whole different way of shopping and cooking and eating. I fell in love with it.”

She returned to France after college, with a husband (her first) and young daughter in tow. They bought a 16th century farmhouse in Provence, raising pigs and goats for a couple of years before returning to the United States—Vacaville, to be precise, where Brennan’s husband had secured a teaching job. (They kept the French farmhouse, which Brennan now owns.)

Back in California, Brennan and a friend started up Le Marché, an imported-seed catalog that catered to organic farmers. Food editors took notice of the recipes sprinkled throughout the catalog, and before long Brennan was writing columns for the San Francisco Chronicle and San Jose Mercury News. That in turn led to a deal to write her first book: The New American Vegetable Cookbook (Simon & Shuster, 1985).
She followed that book up with more than two dozen others, including The Glass Pantry: Preserving Seasonal Flavors (Chronicle Books, 1994), Potager: Fresh Garden Cooking in the French Style (Chronicle Books, 2000) and Williams-Sonoma Holiday Entertaining (Free Press, 2005). The prolific author has two new books out right now: the whimsical Green Eggs and Ham Cookbook (Random House, 2006), with recipes inspired by the Dr. Seuss children’s classic, and A Pig in Provence (Chronicle Books, 2007), an Under the Tuscan Sun-style memoir about her experiences living and eating in the South of France.

Brennan’s books are characterized by a devotion to simple, seasonal food—a passion she acquired in Provence.

“In France, people have gardens, and they cook what’s in season,” says Brennan, who spends up to three months every summer at her farmhouse in Haute Provence, where she runs a cooking school. (Week long classes cost $2,750, which includes instruction, accommodations, meals and wine. She teaches the courses in English.)

The Winters farm provides Brennan with both inspiration and ingredients. She and her husband have an orchard with 60 blood-orange trees, 50 Meyer lemon trees and a dozen fruit trees, an olive-tree nursery and a potager (French for kitchen garden), where they grow most of their produce. She can reach out her kitchen window and pluck a Meyer lemon while cooking.

Brennan cooks every day. If she’s not testing recipes (five to eight at a go), she’s in the kitchen whipping up something delicious to eat. She decides what to cook based on her mood. “I’ll want to eat something, and I’ll go from there,” she explains. “I had a craving the other day for mashed parsnips with pork cutlets. I pounded, breaded and fried the cutlets and served them with the parsnips and broccoli rabe sautéed with garlic.” Recalling the meal days later, she rhapsodizes about “the bitterness of the greens, the sweetness of the parsnips, the crunchiness of the cutlet.”

She also delights in feeding others. After a day of testing recipes, she’ll call up friends and invite them over to eat the results. “It might be four desserts, a composed salad and a roast chicken,” Brennan laughs.

That’s OK, she says: Her kitchen is a place where people gather for emotional as well as physical sustenance. She knows big, glamorous kitchens are in vogue now, but that’s not for her. “There’s all this great stuff in them, and they are really beautiful,” she explains. “But they don’t feel like the focus is where it should be: on food, wine and conviviality.”

Says Georgeanne Brennan: “I love making this simple gratin all year. In spring, I use leeks, spinach or asparagus; in summer, eggplant or zucchini; and in fall and winter, Swiss chard, cabbage or hard squashes, like butternut.”

Thinly slice the white and pale green part of the leeks. Heat 2 tablespoons of the butter in a frying pan over medium heat. Add the leeks and onions and cook, stirring occasionally, until the vegetables are soft and translucent, about 10 minutes. Remove and set aside.

With 1 teaspoon of the butter, grease a gratin dish.

Melt the remaining butter in a saucepan over medium heat. When it has melted, remove from the heat and whisk in the flour, salt and pepper to make a thick paste. Return to the heat and slowly pour in the milk, whisking constantly. Reduce the heat to low and simmer until the sauce has thickened, about 15 minutes. Stir in the cayenne pepper.

Spoon the leeks and onions into the gratin dish, pour the sauce over them and top with grated cheese. Place in the oven and bake until the top is golden brown, about 15 to 20 minutes. Serve hot or warm. Serves 4.