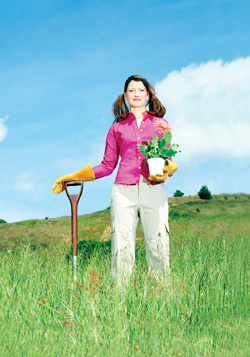 Oh, yeah . . . I was one of many Earth Mothers. Home birth, La Leche League, the whole enchilada, lovingly wrapped in an organic tortilla. We envisioned ourselves as graceful and life-affirming trees of strength, always lushly green, always fragrantly blooming, always a natural nest. We guaranteed a Utopian childhood: pure food, silenced TV, our children cradled beneath our branches, delighting in butterflies as they themselves took wing.

Today, after 24 years of parenting, I’ll swear to this truth: By the time your toddlers speed off to college, nobody will know if they were breastfed or not. You won’t care what they eat. C’mon home for a visit, kids. . . . We don’t have no stinkin’ rules.

It’s all true. Got kids? Flash forward to when you’ll be an empty nester. You’ll be rethinking the cool.

Yes, women’s lives change forever with that first positive home-pregnancy test. If nothing else, we amass small libraries: pregnant women spend nine months researching that one day of delivery as though we are anthropologists studying for a life-or-death test about foreign culture. People who’ve never mastered fractions can quote numerical Apgar scores and how many centimeters of dilation define each stage of labor.

We voraciously read to prepare for how we’ll create an eternally strong, healthy family.

And then what? After the baby is born, it’s a bewildering new world inhabited by other young adults with offspring. Chances are, they have kids the same ages, usually with the same parenting beliefs that will be consistently reinforced during play groups. Just as high schoolers seek out their own kind, parents of small children hang out with others who also are stumbling into the new realities of child-raising.

We were tribes of young mothers who handed around our babies so they’d grow up with extended families and learn to share. Our camcorders recorded the first whole-grain birthday cakes as proof that future happiness is dependent upon early eating habits. We watched intently how our kids socialized and displayed early reading skills—and how other parents handled religion and snacks.

We’d weave memories of child-filled field trips. Holly and I picked oranges for fresh-squeezed juice that was intolerably sour. Patti taught me how to grind wheatberries and fill the house with the aroma of fresh-baked bread that never slipped out of the pan. Fred, my twin brother, would drop by to make fun of my carob ice cream (“You honestly think this is edible?) and my apothecary jars filled with flaxseed and unsweetened licorice.

“Good heavens. . . . Weren’t we seriously nuts?” giggles my fellow ex-Earth Mother Kathleen, who holistically home-schooled her children until they trotted off to the evil vending machines of high school.

“It’s a wonder we didn’t develop ulcers!” And it’s also no surprise we needed bifocals to properly scan for dangers as obvious as speeding cars or as subtle as a sugary cupcake.

I was a proud freak about nature; in fact, I even wrote a successful book about whole foods, leading others down the path of marsupial mothering and primal attachments. The experts I interviewed were doctors who advocated lifetimes of prevention, leading to such terrifying pronouncements as “A child who drinks too much sweet juice may grow up to have an underslung jaw from not chewing enough.” Whew! It was a heady responsibility to constantly check a child’s bone structure for any hints of improper development.
Sacramento boasts scores of fellow ex-Earth Mothers. Doris wonders if maybe we were all united by a luxury of time. Many of us simply switched our Type-A career paths into parenting perfection, transferring our workspace from the office to playroom. After years of supervising people and mastering office politics, our updated résumés included boycotts of commercial baby food and any corporation that encouraged Third-World mothers to use formula. Yes, we were a sorority that pledged to keep our kids tied to nature, their hearts beating in sync with ours, their bodies snuggled next to us until they chose to walk elsewhere. No stone was left unturned as we poetically wrote down every light-filled experience so our children would have a sense of their past and a connection to their planet. Not only would their brains be fully developed from optimal nutrition, but their “sense of place” would be superlative as well.

We had such lofty goals that they couldn’t help but be shot down.

Looking back, I can see how “holier than thou” could easily become a fine art. My parents raised my brother Fred and me realistically, but we Earth Mothers claimed “obsession” before it became an expensive perfume. As children venture out into the world, Earth Mothers have a choice: to forbid them Halloween candy during class parties or to allow them to experience life in all its confusing variety. That whole-grain first-birthday cake is terrific as a candleholder, but our little darlings soon discover the joys of boxed yellow cake with canned chocolate frosting. And we can’t be room mothers forever to make sure our kids only get what we want them to get.

Listen to Cindy, who’s evolved into the next phase: Earth Mother/Grandmother. She had natural childbirth, taught childbirth classes, worked to change hospital policies to allow fathers in the delivery room, breastfed her children until age 2. . . . And she remembers her daughter, Shannon, as a teenager who once stormed home and demanded to know why she had reached age 15 without learning about HoHos.

“I decided long ago that trying to keep sugar away from my daughters only meant that they had a lot of catching up to do in their teen years,” Cindy now says. Amen, sister. We’ve all seen the little kid who gobbles candy elsewhere because it’s forbidden at home.

Eventually, people (even kids) want to try it all, to make their own choices and to invite friends over without worrying about the toxic perils in red fruit punch. My oldest daughter didn’t taste sugar until she was in kindergarten; six years later, her baby brother was born into a household littered with pizza boxes and chocolate chip cookies. It seemed an inevitable evolution to replace tins of whole grains with M&Ms and dedicate a mini-fridge to sodas. As a preschooler, my son inhaled everything that I’d sworn would never be in the house, yet if you glimpse him next to his sister, you’d never guess that his phenomenal math skills came without being on a diet of whole foods.

Put simply, the desire for a home that embraces all sorts of lifestyles is ultimately stronger than the desire to have a home that is prohibitively healthy. Earth Mothers evolve and life goes on—even for my book that was acclaimed for its tips about breastfeeding. Today, it’s sold on eBay with an advertising insert praising a brand of formula.

Flash-forward to now: My 24-year-old daughter recently flew home for a wedding of a high-school friend, who was the first in her group to abandon the single life. It was her first whack of nostalgia, the first time her buddies gazed wide-eyed at each other while asking “Who’s next?” amid promises of someday raising their children together. And, as I snapped countless digital photos of their dazzling smiles, I couldn’t help but realize that they all had bright eyes, working brains and the choice of happiness on their horizons.
Could I tell who was raised by an Earth Mother and who wasn’t? Nope, not one clue.

The truth is that I wasn’t ever a tree robed in the glory of Mother Earth. At best, we parents can simply hope to be one heck of a taproot, something below the surface that may anchor the person above ground. The home we provide, that nest of good intentions, is but one of many stops along their way.
That said, those apothecary jars are always full of M&Ms, just in case anybody drops by.