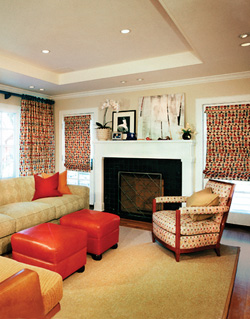 Susan Christman is an interior designer who divides her time between Sacramento and San Francisco. So it’s no surprise that her Sacramento projects feature more than a dash of urban style.

Take the project she just completed for a young Sacramento family. The couple, recent transplants from the East Coast, told Christman they were ready for their first “adult” home. On their wish list: sophisticated furnishings with an easy elegance—and absolutely no formality.

“They had moved here from Maryland, where they had a very traditional New England-style brick house,” says Christman. “They wanted this house to be fun and colorful, yet classic.”

Christman opened her little black book of design resources and went to work, giving their 70-year-old house, located in the Fabulous 40s, a major makeover. She started by painting the walls, using a neutral palette of paint colors from the Donald Kaufman Color Collection.* “Donald Kaufman does full-spectrum colors that use every color in the color wheel,” she explains. “His paints have a lot of depth—they’re literally ‘no-fail’ paints.”

She used Kaufman’s No. 47—taupe with a touch of khaki—in the dining room, and No. 30—a soft moss green—in the living room. Then she turned her attention to the floors, covering the hardwood in both rooms with handsome yet durable seagrass area rugs. “I love the texture and earthiness of seagrass,” says Christman. “It warms everything up.”

For the living room draperies, she chose crisp white Belgian linen from Rogers & Goffigon and covered two Nancy Corzine sofas in a soothing cream and beige cotton jacquard weave. For a punch of color, she used bright apple-green cotton chenille on two carved-wood armchairs, and finished off the room with an antique William and Mary chest from the 1700s that she bought at auction at Bonhams & Butterfields in San Francisco. “I think a house should always have at least two good antique pieces,” she says. “If you have a couple of good things, you can then pull off Pottery Barn sofas. It sets the tone and is a great investment.”

For the dining room, Christman had to sell her clients on the idea of a pricey custom-made table from Therien & Co. The round table, made of bleached walnut, has leaves that attach to the table’s perimeter, so that it remains perfectly round, not oval, when it’s extended. “At first, they were shocked at the price,” says the designer. “It was a stretch. But now they get it.” The chairs, also from Therien, feature cushions covered in striped velvet from Manuel Canovas. For the drapes, Christman used a contemporary Donghia print, with graphic concentric circles in shades of celadon green, aqua blue and taupe.

Initially, Christman was stumped on a chandelier for the small space. “I wanted something classic but minimal,” she explains. She ended up with a custom-made Stephen McKay fixture made of brushed nickel, with tall linen shades. “It’s a modern take on a classic chandelier,” she says.

The entry hall separating the living room from the dining room presented another design challenge. Dark and narrow, it was too small for furniture or art. So Christman paneled the space, using two-by-fours to delineate big squares, and painted the whole thing true white. “It makes the space more interesting and creates a transition from the contemporary living room to the traditional kitchen,” she says. “The paneling gives the space texture and shadowing, and makes it feel larger.”

The kitchen is the most traditional room in the house. The wife, an avid cook, was set on a country-style kitchen with lots of counter space and gourmet appliances. Christman selected a milk-paint finish for the cabinets and Spanish marble for the counters. The mural backsplash behind the range is a patchwork of tiles that are reproductions based on old kilim rugs.

But the homeowners returned to contemporary design for the adjacent family room. “They wanted something fun and a little wild,” says Christman. She splashed out on red leather ottomans, a saddle-leather swivel chair with orange chenille cushions, and drapes in a custom ’50s-retro print from L.A. designer Gregory Evans, hung on an oversized wood pole painted blue. She anchored the room with a sofa covered in a neutral cotton chenille and a durable Karastan area rug. “Everything in this room is comfortable and kidproof,” the designer says.

In the end, the homeowners got exactly what they wanted: a relaxed family home with a sense of fun. Who says you have to live in the big city to have big-city style?