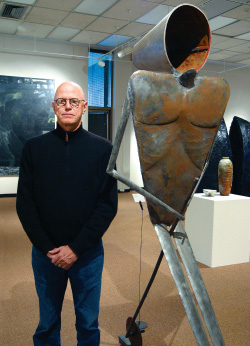 Sacramento’s slogan in the art world could be “the city of sharing.” The spirit of giving shown by local instructors extends beyond lessons in the classroom on color and form. The current crop of established artists claims that teachers in the region provided them with unparalleled mentorship during their formative stages. Some of the most frequently cited individuals are painter Fred Dalkey, an instructor at Sacramento City College for the past 35 years and creator of a large, diverse body of work; Robert Arneson, who taught at the University of California, Davis, and died in 1992, with a reputation as one of the founding fathers of ceramics as an art in California; Jack Ogden, a longtime instructor at California State University, Sacramento, and painter in the abstract expressionist tradition; and the most famous among the group, Wayne Thiebaud, who has enjoyed a long teaching career at UC Davis and whose iconic images from the ’60s of desserts aligned him with the Pop Art movement.

Phil Hitchcock, California State University, Sacramento, art professor and director of the University Library Gallery, believes the ground was tilled perfectly over time for the artists who now call Sacramento home. “These artists were living in a place that was a very creative environment, that was affordable, with two great academic institutions,” says Hitchcock, referring to UC Davis and CSUS. “It is known that those two institutions were national forerunners in the ’60s, ’70s and ’80s in producing a list of well-known artists.”

One beneficiary was Julia Couzens, who moved to the area from San Francisco in 1976. “I was desperate to be back working in art. I took classes at Sacramento City College and immediately connected with Fred Dalkey because of my interest in figure drawing,” says Couzens, who now shows in Los Angeles. “To be honest, I wasn’t expecting much from Sacramento. I was coming from the city and thinking there’s nothing going on here. It just clicked with Fred, and I worked with him for three or four years and then started taking classes at Sac State and worked with Jack Ogden. By then, I had realized there was serious art-making here and it was really everything that I needed.”

Figurative-narrative artist Mike Stevens believes that his forerunners did more than just create wonderful art. “The interesting thing about Sacramento is that I was influenced by artists who were teachers. Bob Else, Jack Ogden, Ruth Rippon, Jim Nutt—they were artists first who happened to teach,” says Stevens, who will be retiring in June after 35 years as an art teacher at Encina High School. “That’s why they were so influential. They are not just teaching technique, they’re teaching the idea of how to be an artist, what an artist looks like. You don’t only learn by what they say, but you can look at their work and look at the trail that they left.” Muralist Stephanie Taylor also appreciates the professional example currently set by local teachers. “I think it’s a really fabulous thing that a lot of the faculty at CSUS show their work locally. These men and women are making a lot of work. There’s a level of enthusiasm and energy here that’s just wonderful.”

Artist Jian Wang relocated here in 1986 from China, where he was a professor of engineering. To pursue his true calling, he left the stability of a job and uprooted his family to begin what would become seven years of arts education in Sacramento. “My education here has been influential in my art. I am very fortunate to study with wonderful teachers and artists,” he says. First, he worked with Dalkey at Sacramento City College, an artist he considers to be one of the most influential teachers here. “He’s so supportive. At the time I spoke very broken English and he helped me not only with the learning but also to get my work out of the studio to show. I got a lot of encouragement from him.” Wang then spent two and a half years at Davis where he “studied and hung out with Wayne Thiebaud every semester.” With a subsequent master’s degree from CSUS, Wang currently has 10 galleries showing his art, some in New York, Atlanta and San Francisco. “I have seen a lot of art from all over the country,” he says. “Because of those professors’ influence, I still think we have the best and most sincere painters in the country. You can sense the joy of the Sacramento artists. Those professors have paved the road.”

Maija Peeples-Bright was well into completing her math degree at UC Davis in 1963 when her counselor advised her to take an art class to fulfill general education requirements. On her first day in the class, she unknowingly stepped right into the middle of what’s known today as the California Funk movement.
Eventually she ended up palling around with such notables as Robert Arneson, William T. Wiley, Peter VandenBerge, David Gilhooly and Roy DeForest. “I was so lucky that Davis was just this hotbed of art at the time that I was there,” says Peeples-Bright, who later became known for her Rainbow House in San Francisco—a house painted every color under the sun, where many of her art colleagues gathered to discuss art and life in the late ’60s and early ’70s. “I find that art drives my life,” she says. “I do art in just about everything—my shirts, crochet my blankets. I have the very good fortune to have had people like Arneson around.”

Hitchcock knows the impact of having such a list of who’s who in the art world. “Sac State’s faculty and alumni had incredible national reputations. They had Ralph Goings, Mel Ramos, Wayne Thiebaud—just to name a few who have gone on to become real heavyweights in the international arts scene. The alumni and faculty we had were second to none, such as Bill Allan, Carlos Villa, Jim Nutt and Gladys Nilsson, who still have tremendous international appeal.”

Stevens says Nutt had the most influence on his career. Nutt was from Chicago and was part of the Hairy Who, a high-profile group from Chicago that also included Nilsson and Karl Wirsum, who also taught at CSUS. “Jim was very influential in the area of figurative-narrative arts at Sac State, but he was also influential in the way that he came in and showed us how to get into a gallery. He showed us how to put a slide packet together and a résumé,” says Stevens, who was able to get his work into galleries in San Francisco, Chicago and then Los Angeles over a 10-year period. “I was teaching school full time and then going home and working all hours of the night to produce bodies of work for each gallery.”

Known affectionately around town as the oldest art museum west of the Mississippi, the Crocker Art Museum has been educating and enlightening Sacramentans since the late 1800s. “Up until recently, the Crocker was a place you went to in the fourth grade and you didn’t go back after that,” says Stephanie Taylor, who grew up in a household where her mother, also an artist, worked with pals like Ruth Rippon to support the Crocker. “That’s really changed now with the shows they sponsor and have put together.”

As a fourth-generation Californian, Taylor has linked her love for history—she earned her degree in the subject from UCLA—and her talents as a painter and sculptor into several large-scale works, such as a depiction of famous Sacramento figures imbibing together that stands behind the bar of the Sutter Club; a survey of pioneer California aviators between 1920 and 1940 captured in a 33-foot-wide mural at Amelia’s restaurant in the Oakland Airport Hilton Hotel; and a tribute to literary icon Jack London at Jack London Square in Oakland. “The location here has such a great history base. As a die-hard Californian, I have a terrific sense of ingrained California history. My ancestors came here just after the Gold Rush. My great-great grandmother was born in Santa Cruz,” says Taylor. “I think that coming from an area that’s agrarian-oriented . . . I think there’s an element of earthy sensuality that I really identify with.”

According to art historian Elaine O’Brien, there’s long been a tradition of landscape painting in Northern California. A few Sacramento artists have made a big statement. “Landscape painting and Wayne Thiebaud—that’s practically a Sacramento school with Kondos and all those painters that come out of Thiebaud. People call it the Delta school because of the landscape here,” says O’Brien. “Tom Monteith’s abstract paintings are informed deeply by the landscape, and other abstract painters here like Joan Moment wouldn’t want that to be ignored. Really, what we love about this place is what these landscape painters are capturing.”

Encina High School’s Stevens says landscape painting is a natural fit for Sacramento. “Artists like Darrell Forney and Greg Kondos are constantly painting the Delta. Bob Else paints tomato fields and scenic views of Sacramento as well as the open spaces that are outside of the city.”

When traveling to other cities, Wang, who frequently paints scenes from the riverbank, says people always ask him if he made up the name “American River” as a political statement. “I always tell them, ‘No! It’s really a river.’ I just put my own inspiration into the water.” Wang says he spends a lot of time near the river watching suns rise and set. “This is an incredible view for me,” says Wang, who happened to settle here because his sponsor, Marjorie Francisco, lives in Carmichael. “I grew up in an industrial city in China, and here you have all the beautiful scenery in the trees and rivers. At the time I came here, I didn’t have any comparison for other landscapes in America, but now that I have traveled quite a lot with my openings—Atlanta, New York, Memphis, D.C.—I come home and feel this is still the most beautiful place.”

“Sacramento is a town that doesn’t eat you alive,” says Stevens. “It’s not like New York or Los Angeles. It still has a bit of that small-town quality that’s on the verge of becoming a big city, and this is appealing to the artists who live here.”

Peeples-Bright agrees. “It’s more fun to be a big fish in a little pond. It allows me to do my thing and not have the pressure of doing what’s hot that year. I like to do my own ideas and think them through and hope that if I am pleased with the finished product, then other people will react to them.”

Wang says he feels fortunate to have made his home in Sacramento. “If I had started somewhere like New York, I may have been buried by the business of the society,” he says. “I think for beginning artists, Sacramento has an incredibly supportive community. Wayne Thiebaud gives a good example of living here and making a name for himself.”

Affordable studio space was why Julia Couzens worked here early in her career. “Getting good working space is really difficult in areas like the Bay Area or Los Angeles. In New York, it’s unbelievable. Many artists will have to share a bed and the space by alternating work hours, so that one is sleeping when the other is using the space,” says Couzens, who rented studios in downtown Sacramento for years but now has a studio in her Clarksburg home. “All along J Street, there used to be a number of second-story spaces that were just fabulous. I had a loft that was just unbelievable. They are harder to find today, but at the time, they were wonderful for artists.”

Art historian O’Brien says the artists here do not fit the stereotypes. “They are not downtown bohemians. They are more like middle-class people, and when you visit them in their homes, they drive Volvos and have middle-class lives.”

On Wine: The Best of Fair Play