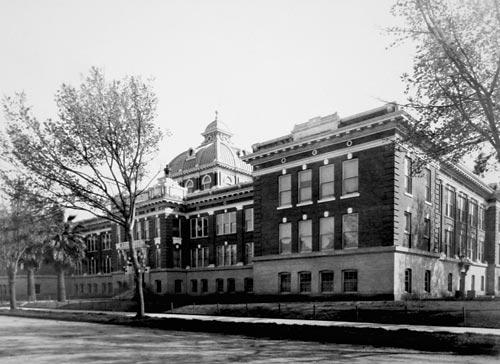 Degrees are a big deal in June, and not just because it’s hot outside: A lot of students are graduating. For many, completing an associate’s or bachelor’s degree is a major milestone. As this year’s graduates celebrate their achievements, it is as good a time as any to look back at the pomp and circumstance surrounding the founding of several of our local colleges.

Among the metro area’s four junior colleges, all part of the Los Rios Community College District, American River College has roots that extend back to 1942. Known then as Grant Union Junior College, the Del Paso Heights-based school trained civilian personnel for the war effort. After the Japanese surrendered in 1945, the school became Grant Technical College and remained so until ARC was christened 10 years later. In 1958, the school moved to a 153-acre site at Cameron Ranch.

Cosumnes River College was a gleam in Los Rios directors’ eyes by 1967, when planning began that led to the school’s opening in 1970 on a 180-acre site about a dozen miles south of downtown.

Folsom Lake College has been described as the nation’s first community college constructed in the 21st century, although classes were held in portable units during the 1990s. FLC received accreditation in early 2004 and construction continues today, with almost 7,000 students sampling its academic offerings.

Sacramento City College is the oldest of the four junior colleges, having been founded in 1916 a few miles south of downtown as a department of Sacramento High School. Only six California community colleges have been around longer than SCC’s 91 years. It was part of the Sacramento City Unified School District from 1936 to 1964, when the Los Rios district was approved by voters.

Affiliated with Stockton’s University of the Pacific, the McGeorge School of Law (not yet so-named) began fine-tuning young legal minds in 1921. The school’s debut did not go smoothly, however, as backers of the project pulled out the day before the first day of classes. A kindhearted teacher&emdash;Verne Adrian McGeorge&emdash;agreed to lecture students in his home, soon recruited top local attorneys and judges to join him and found financial support for establishing the Sacramento College of Law. The school, incorporated as McGeorge School of Law in 1927, changed locations several times before settling in Oak Park in 1957.

Although many of its research facilities are in Davis, the University of California, Davis, School of Medicine conducts most of its teaching and clinical activities at the UC Davis Medical Center (on the former site of the Sacramento County Hospital), a few miles southeast of downtown. Founded in 1966, its first batch of doctors was hatched in 1972.

Hats off to all this month’s graduates, and a tip of the mortarboard to the schools that make it all possible.