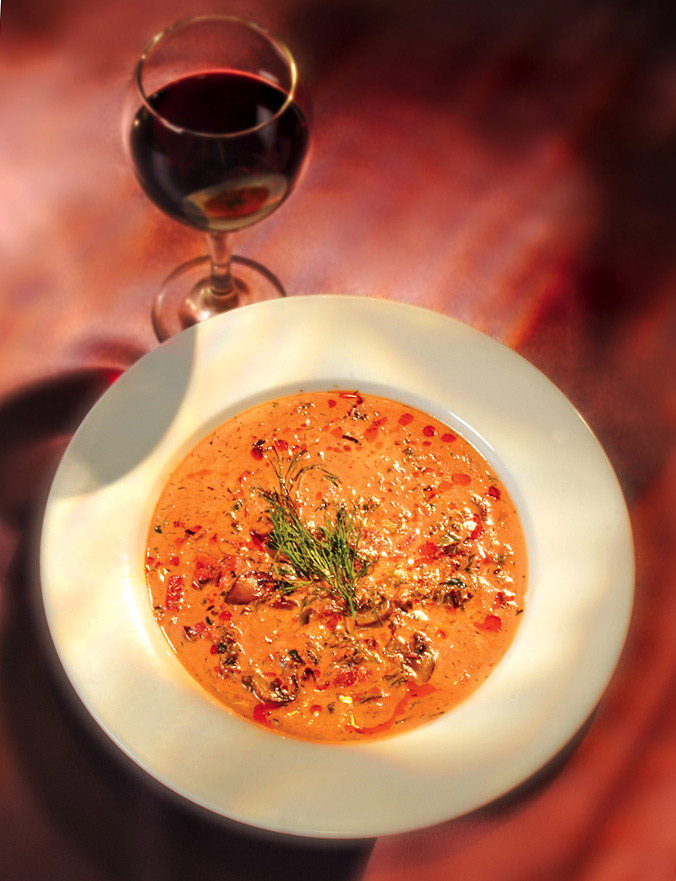 Remember that classic lunchbox treat of your youth, the Hostess Ding Dong? Chef Patrick Mulvaney does. For this clever dessert, he fills a tiny devil’s-food cake with Valrhona chocolate mousse and covers it with a shiny chocolate glaze. The final touch? A white icing squiggle, borrowed from Ding Dong’s cousin, the Hostess CupCake. I bought a box of Hostess CupCakes and had everybody in the kitchen practice making the icing swirl, says Mulvaney.

Best Way To Start Your Day:

Sure, any old body can make pancakes. But Tower makes ’em better by adding yellow cornmeal to the batter and throwing in a handful of plump, fresh blueberries. The resulting flapjacks are light, airy and bursting with fruity flavor. Rise and shine!

Chicken legs, that is. Leave it to chef Rick Mahan to coax maximum flavor out of this most pedestrian of ingredients. Mahan places a deboned chicken leg skin-side down in a skillet and tops it with a brick. The weight forces the poultry into contact with the sizzling-hot pan, resulting in the crispiest skin you can imagine. He serves it up with garlic mashed potatoes and braised chard&emdash;comfort food at its finest.

Best Use of Sulfite-Laden Lunchmeat:

When he wasn’t stuffing himself with fried peanut butter and banana sandwiches, that renowned epicure Elvis Presley chowed down on, among other delights, barbecued bologna. In this calorie-dense tribute to the King, Tex Wasabi’s serves up a plateful of french fries, topped with quarter-inch-thick slices of slow-smoked bologna and housemade Carolina barbecue sauce. You ain’t nothin’ but a hound dog if you can say no to that.

Best Way To End a Meal:

Every restaurant worth its sea salt offers a flourless chocolate cake these days. But Lucca’s version, served warm in a shallow ceramic dish, is the best of the bunch. Made with Valrhona chocolate, it comes with a luscious chocolate sauce and a swirl of sweet whipped cream.

Best Reason To Eat Your Vegetables:

The federal government says we all should eat three to five servings of vegetables a day. Impossible, you say? Mason’s fritto misto&emdash;a massive mound of lightly tempura’d red onion, red and green bell peppers, fennel, zucchini, yellow squash, asparagus, broccoli, cauliflower and mushrooms&emdash;is a tasty way to help you meet your daily requirement. And the zesty aioli dipping sauce helps it all go down.

This, the most popular of Enotria’s appetizers, came about by accident almost three years ago when the restaurant’s ravenous chef and sous chef whipped up a batch of french toast for a workday snack. Alas, there was no maple syrup in the kitchen, so they improvised and made their own sweet garlic version. That, in turn, gave them an idea: Wouldn’t goat cheese go well with the garlic? And thus a star was born.

Best Excuse To Go Off Your Diet:

Cheesecake isn’t fattening enough, right? To rectify that problem, chef Paul Sainoi batters and deep-fries a big slice of the creamy cake till it’s warm and oozy on the inside, crisp and crunchy on the outside, then serves it with a heap of chocolate-caramel sauce. Calling Jenny Craig!

What might hip-hop mogul Sean Combs (aka Puff Daddy, P. Diddy and just plain old Diddy) say about this cheeky little appetizer, which consists of tempura-fried shrimp and imitation crab topped with special sauce? Would Puffy savor the flava?

Best Use of This Little Piggy:

What’s a pig trotter, you ask? Why, the little porker’s foot, of course. Belgian chef Luc Dendievel takes this lowliest of cuts and elevates it to new heights by braising the meat until it’s meltingly tender, then serving it with black-truffle mashed potatoes, mÃ¢che salad and black-truffle sauce. (Back in 2003, when Dendievel toiled at Manhattan’s Brasserie 360, New York Magazine named this one of the Big Apple’s best dishes.)

An inspired take on traditional East Coast-style lobster bisque, this creamy soup is positively swimming with chunks of both smoked and fresh salmon. FYI, chef Jerry Moore (who grew up fishing for salmon on the American River) smokes the fish himself at his East Sac restaurant.

Best Dish for Showing Off Your French Accent:

Want to impress your date with your worldliness and suavity? Try ordering this quintessentially French scallop dish. (Here, it’s sauted with white wine, cherry tomatoes and garlic and served with risotto.) We’ll even help you pronounce it: koh-KEEL’ san ZHACK’ med-ee-ter-AHN’-ay-EN.

Best Use of Fungi:

Rumor has it this salad was invented at Chez Panisse, the famed Berkeley bistro that put California cooking on the map. It’s as simple as they come: sliced white mushrooms, grated Jarlsberg cheese, parsley, salt and pepper, tossed with a mouth-puckering lemon vinaigrette. They’ve been serving it at Zinfandel Grille for at least 10 years, back when the place was still under Paragary’s ownership. And they don’t dare take it off the menu. Our customers would have a fit, says chef Matthew Jones.

Attention, seafood lovers: Chef Patrick Hocking isn’t content to serve this snapper on its own. Nooooo. After searing the fish and topping it with a sprightly lemon sauce, he’s got to add sauted lobster.

Best Way To Get Your Cheese Fix:

In New Orleans, a beignet is a deep-fried, doughnutlike confection dusted with powdered sugar. At Slocum House in Fair Oaks, it’s a ball of brie and Stilton rolled in crushed walnuts, fried in oil and served with a Port wine reduction. Fried balls of cheese: Need we say more?