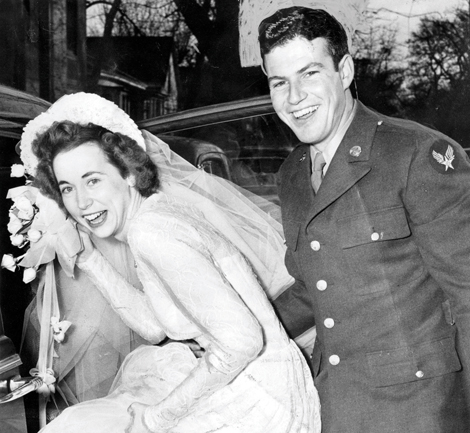 We bring you a Sacramento love story. During World War II, Louise Stephens and Walter Parker Jones Jr. were married in a red brick Episcopal church in Woodland. The couple had scheduled their ceremony for the day after Christmas in 1943 to accommodate Walter’s leave from the U.S. Army Air Corps.

Walters’ father was the editor of The Sacramento Bee, and Louise had been raised in Yolo County. The newlyweds lived briefly in Texas, where Walter was stationed. When the war ended, the couple moved back to Sacramento and raised three children, Walter Parker Jones III (known as Parker), Susan and Beth. They were married until Walter’s death in the early ’90s. Louise lived until 2015.

Daughter Beth reports that her parents bought their wedding cake at Philipp’s Bakery, which operated in East Sacramento for eight decades. Louise balanced the cake on her lap while her mother drove her to Woodland. Thirty four years later, Philipp’s Bakery made the cake for daughter Beth’s wedding, which took place in her parents’ Sacramento home.