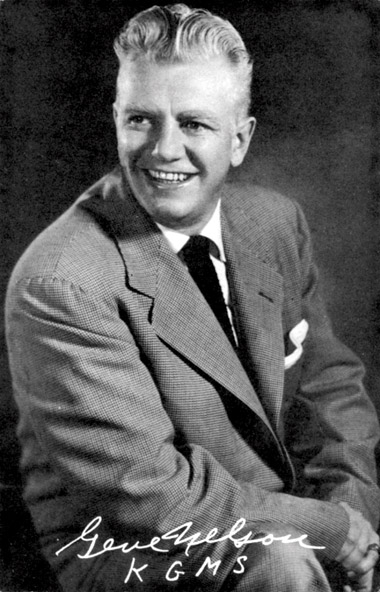 It’s 1953. The On Air sign goes red for the first locally produced television show in Sacramento. Gene Nelson presents Sacramento Varieties, a live show on KCCC-TV (now FOX40) Sunday afternoons, giving local talent their 15 minutes of fame, for better or for worse.
The first act, a trained horse, stops mid-performance and relieves himself. Nelson uses his ad-libbing skills to continue the show.

The thing people don’t realize is that in those days you had to do the thing live, says Nelson, now 86. There were no tapes, no floor directors, no one except the guy standing there with the camera.

Nelson started out in radio hosting Queen for a Night, in Oregon. The show’s winning contestants were flown to Hollywood to be pampered like stars. Ewing Kelly, the founder of KCRA 3, piqued Nelson’s interest in moving to Sacramento with the offer of a five-night-a-week radio show. Nelson declined, but ended up accepting a disc jockey position at Sacramento’s fifth radio station, KGMS. Gene Grouchy Nelson (so nicknamed by his wife, Barbara, because he was always happy) took over the airwaves with the Alarm Clock Club and The Gene Nelson Show in 1952.

After his stint with the radio station, Nelson went on to KCCC, hosting an array of programs all at once: Sacramento Varieties, Breakfast with Gene and an afternoon talk show, Club 40. Friend Bob Miller says Nelson’s shows were so corny, but so wonderful. A live show was such a big deal.

Nelson took his shows with him when he changed stations to Channel 10 and then to Channel 13 in 1958, where he stayed for about a year.
The Sacramento broadcast legend now lives in North Sacramento with his wife and their Jack Russell terrier, Jacky.