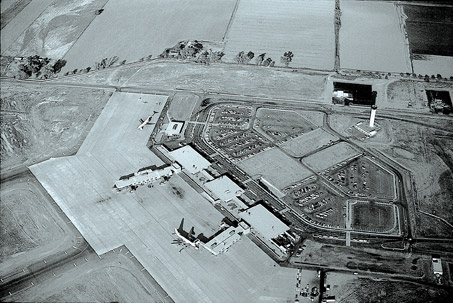 Break out the peanuts and pop open your eardrums, because it’s time to celebrate the 40th anniversary of Sacramento International Airport.

On Oct. 21, 1967, commercial flights that for decades had flown in and out of Sacramento Municipal Airport began using the new facility, on 6,000 acres of former farmland 12 miles north of downtown.

Not everyone was pleased with the $17.8 million project, in the works since the late 1950s. Toby Johnson, chairman of the Sacramento County Board of Supervisors, dismissed the new airfield as being in the mist of a fog, on top of a bog.

Others remained stubbornly fond of the old airport. Plopped on a then-rural 680-acre patch of land a few miles south of downtown in 1930, it was taken over by the military in World War II. The city subsequently regained control and by the 1960s, Sacramento Executive Airport (it’s current name) was handling about 750,000 commercial passengers a year. Neighboring farms had long since been replaced by homes and businesses. Some nearby residents recall how their windows rattled and furniture shook when DCâ€“8s and Boeing 707s came in for landings, The Sacramento Bee reported years later.

[The old airport] provided excellent service for Greater Sacramento and the Central Valley, says William F. Shea, a Woodland resident whose aviation career included being the first chief of the California Division of Aeronautics. But, he adds, local officials realized the handwriting was on the wall that jets were the wave of the future.

When the new, commercial-jet-friendly Sacramento Metropolitan Airport debuted, the air travel scene was markedly different from today’s post-Sept. 11 ambiance of three-ounce-liquid limits and routine removals of shoes. What’s now known as Terminal B had no security checkpoints and few concessions stands; passengers were fed complete meals onboard, after all. About 1 million people flew on the airport’s five initial carriers&emdash;Delta, Pacific, United, West Coast and Western&emdash;in 1968. As recently as the mid-1990s, people dropping off or picking up passengers could park directly across from the old terminal, on the main road, by feeding a meter. It all was so quaint, it was almost surreal.

Today, more than 10 million passengers annually are herded through Sacramento International Airport&emdash;its name for the past nine years thanks to daily nonstop flights to Mexico and, recently, Canada. Also nine years ago, Terminal A opened and still provides a stark contrast to the older B, what with its abundance of natural light and comparatively enormous food court. Three years ago, its six-story parking garage further altered the airport’s landscape. More changes are likely, possibly including the demolition and replacement of the older terminal.

Meanwhile, Executive Airport soldiers on as a multipurpose aviation facility whose services include flight schools and a place for Gov. Arnold Schwarzenegger to park his private plane. The roar continues, if not quite like before.

Reflect: Help for the Heat

A Life of Meaning: Virna Canson