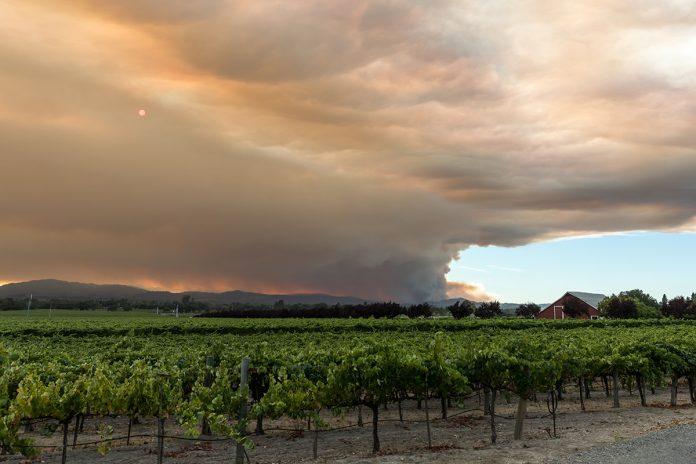 Wildfires in Northern California’s wine country have sadly become almost common over the last 5 – 7 years. This year, the Caldor fire, which started Aug. 14 in El Dorado County, has been knocking at the door of Sacramento’s eastern wine regions. Throughout the past two and a half weeks, the fire has grown to more than 200,000 acres, forced thousands of evacuations and destroyed over 500 structures.

Many local wineries have posted notices of closure because they or their employees have been evacuated or because the air quality is judged to be unhealthy or hazardous due to smoke and debris. Winery harvest decisions are being adjusted and new precautions taken to match a multitude of situations.

In addition to winery issues, a number of large festivals in El Dorado and Amador Counties have been cancelled, including the Motherlode Beer & Music Festival, Gold Hill Country Music Festival and the Barbera Festival. Fair Play’s Zinfest has been postponed, but has already issued new dates for October. For organizers like Russ Reyes of Kilt & Cork, the uncertainty is making planning almost an impossibility. “The issue is not just my company losing revenue but all the bands, sound team, stage, food trucks, vendors . . . everyone was impacted and many of them had multiple events cancelled. I have already heard from a couple that they may not survive this one, when you factor in all the losses last year due to COVID.”

The firefighting efforts have been extraordinary and relentless. Intentional fires have been specifically and scientifically set, a technique called backburning, in an effort to consume the fuels and stop the progression of the wildfire. Kara Sather, executive director for the El Dorado Winery Association, said this past Wednesday, “We feel fairly confident that most of the wineries are now out of harm’s way, but there is a persistent leg of the fire near Fair Play that is defying containment and if it ‘slops over’ additional wineries could be impacted. The majority of the wineries fall into an evacuation warning zone—meaning they are able to operate.”

There is also some good news from the wineries. Because the past few years have shown fire season to coincide with the growing season, wineries have become more prepared. They are becoming experts who understand the effects of smoke on grapes, and are readily shifting their winemaking practices to accommodate a new set of circumstances. For example, they might employ shorter fermentations and more gentle pressings to mitigate any effects of smoke exposure. Micro fermentations, which ferment small lots and provide more control, are being utilized. Likewise, some are clearing their own land and reducing the chances that a fire will march through their property on its path.

When asked about the possibility of smoke taint in El Dorado County, Paul Bush of Madrona Vineyards, in Camino, stated, “Airflow and timing matter . . . At this point, it’s too early to know if there will be any [smoke damage].”

Just because a vineyard has been touched by smoke doesn’t mean it will result in faulty wines. Testing will be done to ensure that consumers do not get negatively effected wines. In addition, this has been a rather hot summer, which would normally result in lower acidity and higher alcohol for white wines. However, Bush happily exclaimed that so far, the white wines from 2021 are “tasting glorious” with beautiful flavors and bright acidity. 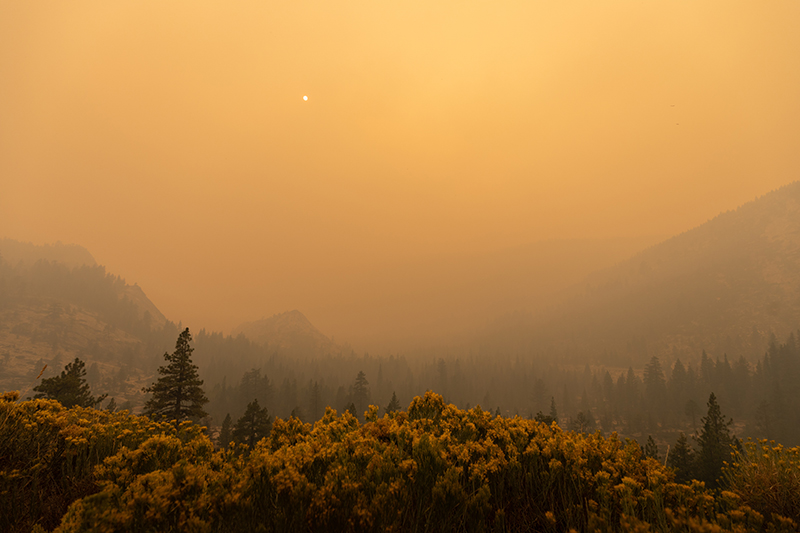 As we turn south, in Amador County, the situation is a little different. “For Amador County we are experiencing a similar situation to what we had last year,” says Jack Gorman, executive director for Amador Vintners. “Last year’s wines showed no effects from smoke taint and, right now, we expect the same this year. It is the ‘fresh’ smoke close to the fire that will produce smoke taint uptake. Once the smoke and/or ash are burned through, the possibility for smoke taint is nil or greatly reduced. This year, luckily for Amador County, the fires all started north and east of us. The prevailing winds are blowing all the fresh smoke away from us. The only smoke Amador has been experiencing is the atmospheric smoke that drifts in the morning down mountain light breezes. This smoke is already well burnt through. We remain cautiously optimistic about this year’s crop.

“Thankfully,” Gorman goes on, “a large portion of white grapes were harvested prior to the expansion of the fire and most wineries are now making decisions on their reds that allow for a wider range of options for smoke mitigation. As the situation remains fluid, we are monitoring our smoke exposure closely and feel well prepared for a number scenarios.”

Amongst the chaos and stress, there have been a number of bright spots where the best of human impulse and intention have been on full display. For example, Via Romano Vineyards posted on social media that they had received assistance from Revolution Wines in Sacramento when they needed help evacuating and then again when they needed a spot to crush their grapes from the current harvest. Additionally, the Green Room Social Club, a restaurant and live entertainment spot, is offering assistance by allowing Via Romano wine club members to pick up their current club selections from their location on Main Street in Placerville.

In another instance, a wine called Collaboration—grown in El Dorado County and produced in partnership by three wineries (Holly’s Hill Vineyards, Madrona Vineyards and Di Arie Vineyard)—was put up for sale on social media this past Wednesday. Upon the announcement, wallets were opened and orders were placed. The entire stock was sold out in less time than it takes to drink a bottle of wine, with all proceeds going to the Caldor Fire Fund.

The stresses brought on by the fire, in the middle of a drought, in the middle of a global pandemic are felt widely and deeply. Everyone is looking for relief. Luckily, it appears that there are some rays of light starting to shine through as blue sky is visible and neighbors and communities band together to provide support.

To make a donation to the Caldor Fire Fund, please visit the El Dorado Community Foundation.

Dinosaurs at the Zoo