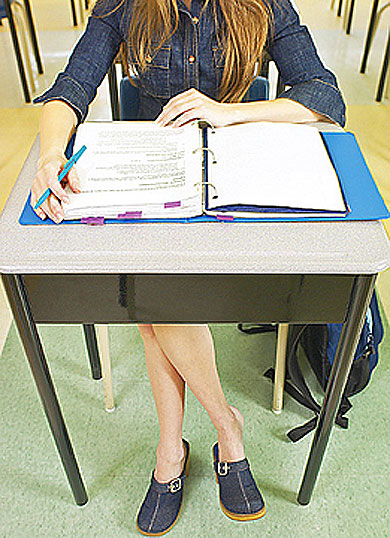 Enough already about teens and their iPod-clutching, cell phone-abusing, MySpace-addicted ways. We’ve got proof that many members of this much-maligned up-and-coming generation possess the leadership, intelligence, talent, commitment and integrity it takes to effect positive change in this world. Best of all, we didn’t have to look far. The four whiz kids we picked from Sacramento-area high schools are outstanding for different reasons (one’s a scientific wunderkind; another’s a budding Piaget), but all have the potential to make a lasting imprint on the future. Now if only their classmates can forgive them for blowing the bell curve . . .

Albert Hoyoung Chi collects science-competition honors like some teens collect Volcom gear. This year, he was one of 300 high school seniors nationwide to advance to the semifinal round of the Intel Science Talent Search, one of America’s oldest and most prestigious science competitions that often is referred to as the “junior Nobel Prize.” In January, Chi received a $1,000 scholarship along with $1,000 for his school, which is in the San Juan Unified School District. Chi and fellow Mira Loma student Patricia Griffiths were the only two students from Sacramento County to advance this year out of a field of more than 1,500 students (from 486 high schools) who submitted reports detailing their projects to the Intel Corp.

Chi’s project, “The Extension of Fluorescence Resonance Energy Transfers via Gold Nanoparticles” (uh, let’s just say it has something to do with really, really tiny measurements within a double-stranded DNA molecule), grew out of a research program he enrolled in last summer at the University of California, Santa Barbara. Chi received similar honors for the same project in the 2005-2006 Siemens Westinghouse science competition. And last year at the Sacramento Regional Science and Engineering Fair, he won the Yale Science and Engineering Association Award and the Outstanding Young Scientist Achievement Award by the California Association of Professional Scientists. It goes without saying he’d better not be out sick when his school’s Science Bowl and Science Olympiad teams vie for regional and state championships.

“Albert is an intuitive, knowledgeable student who is very dedicated. He’s very quick with obtaining information and grasping new ideas,” says Mira Loma Science Bowl coach James Hill, who serves as regional director for the Science Olympiad. “It’s a treat to teach students like him. They keep you on your toes and challenge you; at the same time, we try to challenge them.”

Chi, the son of aÑwhat else?Ñrocket scientist, says, “I can’t remember not being immersed in science. A few years back, I was more interested in physics because that’s what I thought was the most real, physical science that you could observe and utilize. I saw cars and airplanes and they were all amazing to me as a little kid. You know, what makes them fly? What makes them run? What makes the engine heat up and burn? Then I found biology and chemistry and all the other sciences that work on a molecular level, and I think they have a lot more pertinence to human life and human development. I don’t know what I want to do in the future; I guess I’ll figure that out when I go to college. But my lab experience really opened my eyes to biochemical research.”

Chi, who has a 4.7 grade point average, has applied to several colleges, including UC Berkeley, Stanford, Massachusetts Institute of Technology, Harvard and Columbia. He sums up his secret to academic success in a quote not by a famous scientist, but by World War II Gen. George S. Patton: “A pint of sweat saves a gallon of blood.”

“I believe that,” he says. “It’s kind of along the lines of Thomas Edison’s saying invention is 99 percent perspiration, 1 percent inspiration. You’ll never know if you have natural ability if you don’t work hard.”

When the Derebenskiy family immigrated with 2-year-old Zoya to the United States from Moldavia in 1990, they had to start over in every sense of the word. That was the price they paid for the freedoms they couldn’t enjoy in their then-Communist homeland.

Fast-forward 16 years, and look at Zoya now: the oldest of six children, ranked second in her class of 701 at Elk Grove’s Sheldon High, and destined for UC Berkeley, UC Davis, UCLA or Stanford with the goal of becoming a doctor.

“It’s part of the culture back in Moldavia that women have to grow up to be wives. But when we came over here, my dad said, That’s not going to work for you here. You’re going to have to go out and learn, and do the best you can do.’ So I’m kind of a perfectionist. And I’m kind of a role model because my siblings look up to me,” says Derebenskiy, who organizes blood drives at her school, teaches Sunday school at her church and works part time to help support her family.

A church mission trip to Mexico last year cemented Derebenskiy’s resolve to dedicate her life to helping others. There, she saw girls not much older than herself subsisting with their babies in cramped, paper-thin shacks, with scarcely enough food to get through the day. The thought of American consumerism made her wince; she no longer wanted to pursue a business degree and a fat salary. She even saw education in a different light.

“School is important, but it’s not going to matter what your grades were if no one can see what you’ve contributed to society,” she says. “I’m interested in becoming a doctor; I’ve thought about becoming involved in Doctors Without Borders. I don’t just want to work in a hospital and be in a safe little environment when there are so many people in the world who need medical care and everything else.”

Faculty members who know her well applaud Derebenskiy’s leadership, initiative, organizational skills and goal-setting abilities, but to Sheldon High counselor Toni Singh, it’s the intangibles that set her apart from the rest.

“Zoya has a genuine love for family, education and humanity. I’m so proud of her for having the courage to nourish her soul,” Singh says. “We can teach a young person how to solve equations and write an essay. We cannot, however, teach them moral character. Zoya has evolved into a responsible and caring citizen, and her character is morally strong. She is a remarkable young woman.”

The difference between Keith Lui and the vast majority of student musicians is this: Others see themselves as having to practice. Lui sees himself as getting to.

“Music is a stress reliever that allows me to enjoy life to its fullest,” says Lui, whose acrobatics on the oboe and English horn have captured national honors. “Some people consider playing music a job or a hassle. I believe it is a privilege. It’s an awesome feeling when you can produce music that sounds good to your ear.”

That attitude helped nab Lui the principal English horn spot in the 2005 Hershey’s All-USA High School Band, created to honor the best high school band students from around the country.

“It meant a lot just knowing my hard work had been fulfilled. I’m still pretty shocked about it,” he says about the award, presented by the National Association for Music Education and Hershey Foods Corp.

A former member of the Sacramento Youth Symphony and the California High School All-State Honor Band, Lui decided to curtail his musical activities this year to make room for his other passions: swimming and water polo. “I love playing water polo because I’m smaller than most people, and I just love being able to stop people bigger than me,” he says, smiling.

Oh, and did we mention Lui is a straight-A student on track to become class valedictorian? For that, he credits luck, hard work and a tough act to follow, otherwise known as an accomplished older brother. A laid-back attitude helps, too.

“I just do things as they come rather than stressing or worrying about what’s coming next,” says the UC Berkeley-bound Lui who someday wishes to become a doctor, lawyer or business tycoonÑbut not a full-time musician. (“Too hard to make a living.”)

“I love music and I hope it will play a prominent role for the rest of my life,” he says. “I do want to continue playing, but probably more as a hobby than as a profession.”

Lui’s band director at Christian Brothers, Travis Maslen, predicts great things for Lui, not only as a musician, but as a person.

“He’s one of those guys who’s going to be a brain surgeon and play in an orchestraÑall those things that everybody only dreams about,” Maslen says. “He’s got his feet planted firmly on the ground.”