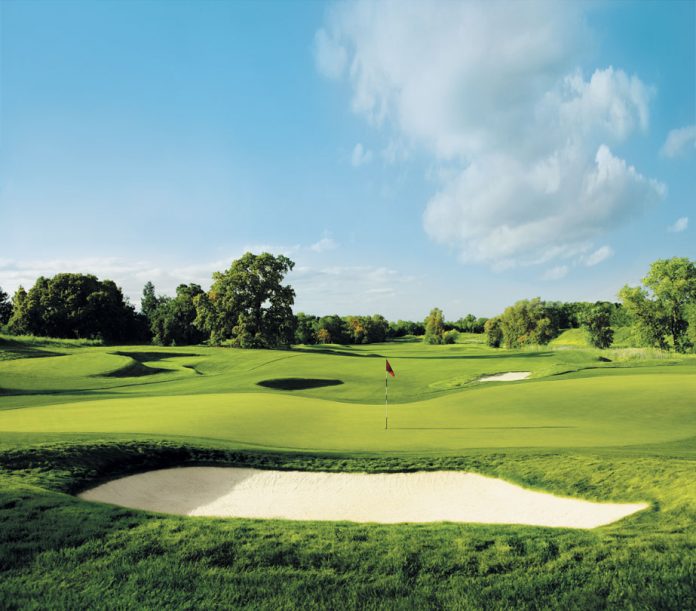 Head golf professional at Timber Creek Golf Course at Sun City Roseville, Mark Gouger says he likes to play Empire Ranch Golf Club in Folsom when he has a day off. I like Empire because I live two blocks away, and its always in great condition, he says.

Gouger started his career teaching tennis. He then became a ski instructor before becoming involved in hospitality management. He turned to golf out of a desire to get back into athletic instruction and actually fast-tracked his PGA certification in just 28 months. Of his first job in golf, he says he was about a 20-handicap. Within a year, his game improved enough for him to pass the PGAs rigorous playing test.

Commenting on his ability to so quickly improve, he says simply, I have this gift where I can watch something and can mimic it.

Gouger lists Morgan Creek Golf & Country Club as another favorite. I like the Kyle Phillips design, he says. He also touts another Phillips design: Kingsbarns is one of my favorite courses that Ive ever played. To me, that was spectacular. Located near St. Andrews, Scotland, Kingsbarns Golf Links might be a wee bit too far to travel on a day off.

Mike Green, longtime head golf professional at Del Paso Country Club, says, I like to go to Winchester because they are open on Mondays, my day off.  Its so beautiful and so well-conditioned. Im going up there more just to practice
and relax.

Green also enjoys a course that he says not many Sacramento residents know about: Green Valley Country Club in the Suisun area.

Teal Bend Golf Clubs teaching professional Dave Carr says, Im one of those pros where I play my course when I have a day off. What I do on days off is grab my 4-year-old and go to Teal.

When pressed, Carr, who qualified to play in the 2004 U.S. Open at Shinnecock Hills, acknowledges that another fun place to play is Saddle Creek Resort in Copperopolis. Its all there in front of you, he says. When youre done, you dont have a headache.

For retired PGA Tour and Champions Tour player Dick Lotz, every day is a day off. He has played premier courses at the highest level but, locally, Lotz favors Mather Golf Club for a public track and the redesigned Del Paso Country Club for a private facility.

Regarding Mather, Lotz says, You can play your whole bag there. Its a walking golf course. When you are walking, you socialize more with your companions.
He observes that the redesign of Del Paso has made it into a shot-making course. I really like what they
did there.

If golf swings were an artists brush, Brett Taylor would be in a gallery. Possessing a swing so rhythmic that Jack Nicklaus once singled him out on a driving range at a college tournament, Taylor, who grew up in Santa Rosa and Utah, gave up touring golf early after financial backers pulled out of an overseas sojourn.

He found his true passion on the teaching tee. From the south corner of Empire Ranch Golf Clubs driving range in Folsom, Taylor today gives lessons to selected players on the nationwide and Canadian tours, and he has a full slate of core golfers and kids. His computer and video camera are as important as his golf clubs.

The youngest player ever to win the Sonoma County Amateur Championship (he was 16), Taylor still loves to tee it up on off days at Sonoma National Country Club, calling it absolutely just a fun course from start to finish.

The former Utah State Junior Player of the Year, Redwood Empire conference Player of the Year, and Northwestern All Big 10 player also cites The Ridge in Auburn and Stevinson Ranch Golf Club as enjoyable tracks to play on a day away from Empire Ranch.

Rob Frederick, the only head golf professional that Woodcreek Golf Club in Roseville has ever known, unhesitatingly says Silverado when asked about his favorite day-off destination.

Frederick grew up in Paradise and played at Butte College while working at golf courses. During his youth, he often traveled to Silverado Resort to watch the Kaiser International Open Invitational, a PGA Tour event. After graduating with an accounting degree, he found writing low numbers on scorecards more to his liking and sought out a career in the golf industry.

When pressed, he expresses a preference for the North Course but insists that he savors the complete stay-and-play experience.

Walter Hix III, a longtime Northern California-based golf professional and current director of golf at Sunset Whitney Country Club in Rocklin, lives near Timber Creek at Sun City Roseville. It is close to my home and, over the last two years especially, it is always well-groomed and in very good condition, he says. The staff is so cordial.

Hix has been a club professional for more than 35 years at facilities ranging from Sacramento to Princeville, Hawaii. He says that Timber Creek is very playable in all conditions. The design makes it fun for all golfers, he says. You dont have to grind there.

Showing a preference for traditional designs and player-friendly tracks, he also cites Ancil Hoffman Golf Club and Yolo Fliers Country Club in Woodland as other favorites.

Tom Morton is the Sacramento-based golf pro who may possess the longest job title: PGA director of player performance. Morton heads up the state-of-the-art Player Performance Studio at Haggin Oaks Golf Complex. The facility at the north corner of the driving range is so high-tech, it offers a Doppler radar system, called TrackMan, to chart ball flight while a golfer is being fitted for clubs or receiving a lesson. After all, the Haggin Oaks facility is often so busy it rains golf balls.

Perhaps because Haggin Oaks is such a high-traffic spot, Morton expresses a preference for golf courses that are not as heavily trafficked when he has a day off. He names Winchester Country Club. It is usually in fantastic condition and it is not crowded, he says. I like it because it is very challenging and is a shot makers course.

The recently redesigned Del Paso Country Club is another Morton fave. The more I play it, Im actually becoming a fan of the new Del Paso, he says. A sign of a good golf course is it gets better the more you play it.

Their favorite course is Campus Commons Golf Course, the recently remodeled nine-hole layout in Sacramento, nestled alongside the American River. Says Sutherland, To a 5-year-old, Campus Commons is like Augusta National with that river.