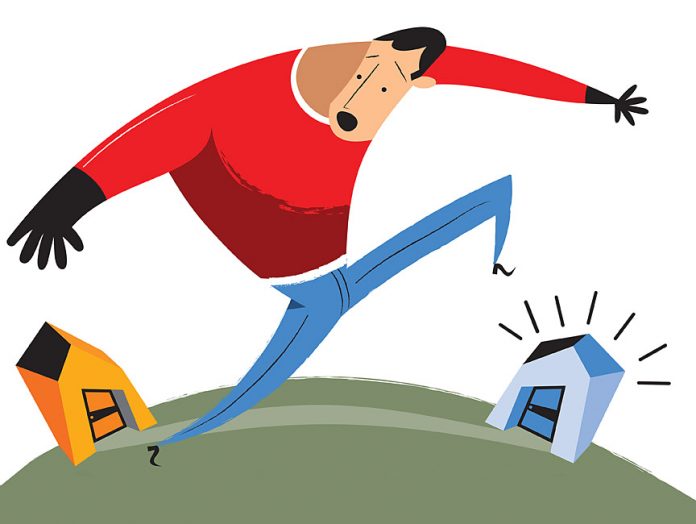 Owing more on their mortgages than their homes are worth, some people are choosing to simply walk away. It’s a remedy called “strategic default.” But is it ethical?

When Chris Schreur and his wife, Valerie, bought their three-bedroom, three-bath home in Folsom in 2007, they figured on staying there awhile. “We loved the location, it was in the school district we wanted for our daughter, [and] it was a good entry point, costwise,” says Schreur.

But just two years later, the couple made a drastic decision: They chose to walk away from their mortgage—one they could afford to keep paying—after their home’s value dropped by about one third, from the $440,000 sale price to $300,000.

“The financial hit was just too great for me to consider staying in the house,” explains Schreur. “I didn’t go into this thinking that this was going to happen. Not by a long shot. But things change.”

Indeed, they do. Perhaps no one knows that better than those who purchased a home during the rah-rah housing boom that ended in 2005 and collapsed catastrophically two years later.

Economists estimate that nearly a quarter of U.S. home-owners are currently under water, owing more on their mortgages than their homes are worth—in some cases considerably more. According to analysts at Moody’s Economy.com, nearly 9 million borrowers across the country owe at least 25 percent more than their properties are worth.

Although the vast majority of homeowners whose loans are upside-down are staying put, the precipitous drop in home prices has spurred some people to throw in the towel. Their tactic? Going into strategic default—in other words, walking away from a home even when they theoretically can afford to stay.

Many homeowners who choose to walk away end up negotiating short sales with their lenders. Sherri Garewal, a Sacramento real estate agent who specializes in short sales, said that out of the 13 home listings she had in April, only two owners were selling because they couldn’t afford to stay. As for the others? “They’re just so upside-down that it doesn’t make financial sense to hang on,” she says.

In a short sale, a lender agrees to accept less than the balance owed on the property’s loan. Homeowners unable to negotiate a short sale with the bank, meanwhile, remain in their homes—sometimes without making mortgage payments for several months or, in rare cases, up to two years—while they wait for the foreclosure process to conclude.

Strategic defaults are not common—experts speculate that nationwide about 20 to 25 percent of all recent defaults are voluntary—but they’ve raised the ire of the banking community.

“I have a lot of sympathy for those folks who truly cannot afford to make the payments,” says Steve Fleming, CEO of River City Bank. “That to me is a completely different situation versus the person for whom the only change was simply that their house went down in value.”

Such cases elicit no pity from Fleming. “They en-tered into contractual agreements. Nobody forced them to borrow the money,” he says. “They signed a contract saying that we will pay this money back according to these terms, and the fact that the property went down in value does not mean that they’re not obligated to make the payments.”

But not everyone agrees. In January, financial journalist Roger Lowenstein wrote in The New York Times Magazine that yes, mortgage holders do sign a promise to pay, “but the contract explicitly details the penalty for nonpayment—surrender of the property. The borrower isn’t escaping the consequences; he is suffering them.”

Brent White, a University of Arizona law professor, published a controversial discussion paper this past October in which he argued, among other things, that homeowners are being shamed into holding onto mortgages that are not in their financial best interest. White and others posit that banks might be more likely to renegotiate loan terms for underwater homeowners if faced with an onslaught of voluntary defaults.

Indeed, in most instances the societal pressure to stick it out—and the hope that home prices will rebound—deters homeowners from walking away. “Most people still feel an ethical and moral obligation to meet their contractual terms,” says Fleming. “The vast majority of people do in fact continue to make payments, even when they’re under water on their home loan.”

Yet the propensity to walk away depends largely on how deep they’re in. According to researchers for the Financial Trust Index, a joint project between the business schools at The University of Chicago and Northwestern University, the more a home’s value drops, the greater the likelihood that the homeowner will walk.

And the walk-away phenomenon appears to be contagious. Luigi Zingales, one of the authors of the Financial Trust Index study, told The Wall Street Journal last year that, ethical considerations aside, the predisposition to default increases with the number of foreclosures in the same ZIP code. In other words, the social stigma of walking away from a mortgage evaporates when everyone on your block is doing it.

It’s a scenario that Jon Maddux is banking on. Maddux, a Sacramento native, is CEO of You Walk Away, a Carlsbad-based company that has guided approximately 4,500 homeowners through strategic defaults since 2007.

As Maddux sees it, his company is stepping in to help homeowners where lenders have failed them. “Anyone who has tried to do a loan modification or short sale is disillusioned with banks because they get talked down to, they get treated bad,” says Maddux.

For a minimum enrollment fee of $295 plus $99 a month, You Walk Away will guide homeowners through the foreclosure process. Depending on the membership level a customer chooses, the company will provide consultations with an attorney and accountant and assign a caseworker to monitor the foreclosure timeline weekly.

Maddux understands the controversy that You Walk Away has ignited, but from his perspective the company is helping homeowners take control of an out-of-control situation. “A lot of people think that when you say the words walk away, that that’s just putting your keys in the mail, sending them back to the bank and then moving,” explains Maddux. “But we never thought of it that way. It’s about taking back the power and saying, ‘I am in control of my future now.’”

Maddux believes the social stigma of foreclosure is fading and that lenders exploit the moral and ethical arguments against walking away for their own financial gain.

“I think the banks would certainly like for you to feel that there’s a moral and ethical obligation to the contract,” says Maddux. “But contracts in and of themselves are not a moral or ethical instrument. They’re just a contract that states the agreement, the terms and the consequences.”

Corporations have long held that same view. Case in point: Morgan Stanley recently relinquished five San Francisco office towers to lenders two years after purchasing them for top dollar. And even the Mortgage Bankers Association—whose CEO, John Courson, implored homeowners not to default on their mortgages because of the message it would send to “their family and their kids and their friends”—did a short sale of its headquarters in Washington, D.C., earlier this year.

Victor Stango, a professor of economics with the UC Davis Graduate School of Management and an expert in household finance, acknowledges that corporations have an easier time viewing their own strategic defaults as business decisions as opposed to moral ones. “There are repercussions,” says Stango, “but default has been happening in lending markets as long as lending markets have existed.”

As for any ethical considerations, “I think home-owners have to hold themselves up to their own individual standard, just as a corporation does,” says Stango. “Everyone has this moral attachment to homeownership and an aversion to not living up to their obligations. But it’s still important to understand them in the context of the economics.”

For starters, a short sale or foreclosure will knock between 85 and 160 points off your credit score depending on what the score was to begin with, according to Fair Isaac, the developer of FICO scores. (Bankruptcy, by comparison, will drop a score 130 to 240 points.)

A low credit score can affect your ability to borrow money in the future. Rates for credit cards, auto loans and even insurance will be higher. Also, depending on the particulars of the mortgage and the manner of delinquency, it can take anywhere from six months to seven years before you can purchase another home.

Foreclosures and short sales also lower home values in a neighborhood. And whether it’s a hurricane or financial disaster that strikes, there is ample evidence that waves of homeowners evacuating a neighborhood can unravel the fabric of a community.

What’s more, analysts say that if the voluntary default trend grows, it could make it more difficult for new borrowers to obtain mortgages and potentially derail the housing recovery.

For Schreur, who is now renting a home 400 square feet larger than the one he left—and for about $1,000 less per month than his mortgage payment—the downsides were worth it. “A credit score is something that you can repair over time. It’s not necessary for day-to-day living,” he says. As for the neighbors, “They not only completely understood, but many of them are choosing to do the same thing themselves.”

Schreur readily admits the decision to walk away was difficult. “I had a lot of guilt and regret because we had pristine credit, 800 credit scores, [and] we paid our bills on time,” he explains. “We struggled talking to our parents about this.” He loathed feeling “like we were deadbeats, that we just skipped out on our obligations.”

Still, Schreur has no regrets. Renting, he says, has given him “a good deal of relief.” As for whether he and his wife will purchase another home in the future, Schreur says they probably will, “but I’m in no rush to get back into that.”