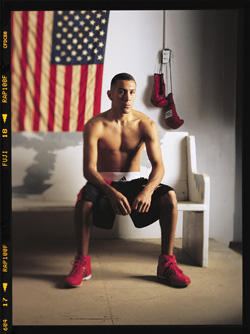 His brother says he’s a little like Dr. Jekyll and Mr. Hyde—one person inside the ring, another person outside of it.

“If you met him,” says José Escobedo of his younger brother Vicente, “you wouldn’t even know he’s a boxer. He has a good heart. He’s friendly with everybody. He likes to make people smile.”

But once Vicente steps into the ring, he says, “he’s a totally different person.”

Right now, Vicente is a totally busy person. He is immersed in one of the most grueling yet heroic tasks imaginable: preparing to compete in the 2004 Summer Olympic Games.

Joining the U.S. Olympic Boxing Team is a dream come true for the 22-year-old Woodland native.

“It’s the American dream, and I am living my dream,” says the 5-foot-7-inch, 132-pound lightweight, whose rigorous pre-Olympics schedule pre-empted the possibility of a face-to-face interview. First he was in Reno, where he emerged victorious in the USA-Puerto Rico duel; next stop was Olympic Team Training Camp in Colorado Springs, where he graciously agreed to chat, via phone, between workouts.

Escobedo’s Olympic visions began to materialize when he won the National Junior Olympics at age 15. “Before that, I was just boxing to fight, because I loved it,” he says. “But when I won the Junior Olympics and became a national champion, it started to set in my mind that I wanted to win the gold medal.”

Like countless superstar athletes before him, Escobedo grew up poor and was on a downward spiral when he found a positive outlet in sports. His brother José, 10 years his senior, not only pointed him in the right direction, but put him on the path.

“Vicente was hanging out with the wrong crowd and getting into trouble,” José says. “I wanted to get him into something positive, and to be a good role model for him, so I got him into sports.” A natural athlete, Vicente showed early promise in football but was too small; he also excelled in baseball. But José’s interest in boxing spilled over to his younger brother, and the two began sparring at the Woodland Boxing Club.

“José took me to the gym one day, and I started hitting the bag with intensity, and I had an adrenaline rush,” recalls Escobedo. “That was when I decided to stick to boxing and to pursue that. I was 13 at the time.”

He also was 13 when his parents divorced, but hesitates when asked whether there was a connection between the two events. “Hmm . . . I don’t know,” he says quietly. “I’d been boxing for a couple months prior to the time they split up.”

Rosendo Escobedo and his wife, Margarita, had emigrated from Mexico and were living in Los Angeles when their first two sons, José and Rosendo Jr., were born. But there were no jobs in Los Angeles for immigrants without skills, so the Escobedos, seeking work as farm laborers, relocated to Woodland, where Vicente was born in 1981.

“They were struggling,” Escobedo says. “I grew up in a bad neighborhood, with all the usual problems . . . gangs and drugs.”  Determined to provide their children with a better way of life, the Escobedos eventually moved to a safer part of town. “We did everything in our power to move out of that neighborhood, and we did,” Escobedo says.

Around the same time, Escobedo became a regular fixture at the Woodland Boxing Club, where it took him only a few months to prepare for his first match. There’s been no stopping him since.

“He’s one out of a million kids,” says his coach, Ricardo Carrillo of the Woodland Boxing Club. “I’ve got so many kids in there (the club), but Vicente has been able to stick with it. That’s the difference.” Despite early signs of potential, there were disappointments along the way. “He would go into tournaments and make it to the finals, but he would lose in different weight categories, because he was growing,” says Carrillo, who had first trained José. “Most kids would have been discouraged and left the gym, but Vicente kept coming back. We just kept training and sparring and training and running . . . all the elements it takes to become a boxer.”

After winning the national championship in 1997, Escobedo was “still hungry,” says Carrillo. “On the plane, coming back from the tournament, he told me he wanted to win an Olympic gold medal. Of course, I had to agree with him. I said, ‘Yeah, yeah, that’s right.’” When Escobedo finally secured his spot on the Olympic team earlier this year, Carrillo says, “I was jumping up for joy. I put it like this: We’re going to the Olympics, and I don’t care what it takes. If I have to hitchhike, if I have to swim . . .  I’m going.”

Getting to Greece is not going to be easy for Escobedo’s family, which, at the time of this writing, had raised about $15,000 of the $20,000 necessary for travel. RE/MAX Woodland donated $6,000 to the cause, according to Escobedo, and a fund-raising account was established in the family’s name at Bank of the West. “People in the community have been sending money and helping out,” says Escobedo, who is hopeful that his mother, his brothers and sister-in-law, Arcelia, will be able to make the trip.

Chances are, they won’t be his only supporters who will be in Athens when the games begin. Wherever Escobedo competes, family, friends and fans follow. Even when wildfires shut down portions of Interstate 80 in May, some 150 locals drove to Reno for the USA-Puerto Rico match, chanting his name, waving flags and cheering wildly as he entered the ring. “It hypes me up,” Escobedo says.

“Hyped” is an understatement. Escobedo is driven to be the best. In addition to a Herculean workout regime, which includes long morning runs and two hours of jumping rope, hitting bags and other boxing-related exercises every evening, he prepares for each match by studying his opponent. “I study tapes, watch films . . . use all the information I can get. A lot of people don’t want to take the time to do that, but it helps you out.” He refers to his own technique as “box-punching,” explaining that he likes to box, but he also likes to attack. But in the final analysis, he says, it’s simply about fighting your best fight. “That’s how it works.”

Although there isn’t much time for a life outside of boxing, Escobedo tries to keep a balance. “When I come home from a tournament, I don’t like to think about boxing,” he says. “I have to do other things, otherwise I get burned out.” His relationship with his girlfriend of three-and-a-half years, Robin, is a priority. “We’re real serious,” he says. “It’s like we were meant to be. We’re really connected.”

He’s especially indebted to his brother José, who has made countless sacrifices to help the family and to accommodate Vicente’s dreams.

“He’s really my hero,” Vicente says of José. “He gave up school just to take care of the family. Everything I learned, I learned from him. I really look up to him.” To survive financially while pursuing his boxing career, Vicente lives with José and his wife in Woodland.

“I’ve sacrificed a lot of things,” admits José, “but it’s all worth it.” His construction job pays “pretty good money,” he says, but he budgets carefully. “I always knew there was a possibility that we might go to the Olympics, so I didn’t spend too much,” he says. “I didn’t buy new clothes, or a new car, or take a trip, or anything like that. I just put all that off.”

In his own way, brother Vicente also is putting things off while he dedicates himself entirely to the Olympic pursuit. “Winning the gold medal is all that’s on my mind,” he says. “I work hard, I dedicate myself to this, and it’s a dream that I really want to accomplish.” When he closes his eyes, he envisions himself standing at the podium with a gold medal hanging around his neck. “When I think about that, it encourages me to work harder. I think about my family and my future. I’m fighting for myself, but I’m also fighting to make a better life for my family.”

Serving as interpreter for his mother, who speaks Spanish, José shares this quote: “I’m very proud of Vicente, and very happy that we will represent our country in the Olympics. We will not only be representing America, but also our native Mexico.”

At the moment, it’s nearly impossible for Escobedo to contemplate life beyond the Olympics. But he tries. “I’ve thought about turning professional, but I’ve also thought about going back to school,” he says. “I like the idea of helping kids, talking to kids at their schools, teaching them that boxing is not meant for outside of the ring. I can see myself as a counselor, helping kids with problems.” But for now, he says, he can only think about one thing.

“Right now we’re just focusing on the goal of the Olympics,” he says. “I don’t have a plan for my future yet. When that day comes, then I’ll make a decision.”