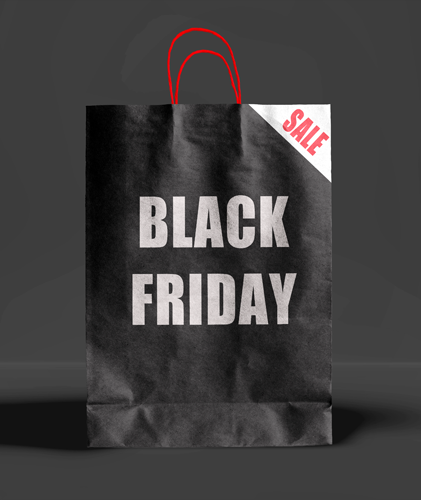 Several years ago BC (before children), my friends Janice and Marc were staunch participants of Black Friday sales, getting up at 2 or 3 a.m. the day after Thanksgiving to wait in line at Best Buy or Walmart or Target or wherever the hot sale was to score crazy deals on TVs, laptops, even hair dryers. (“They were so cheap, I could not afford not to buy three,” said Janice.) As much as I love a bargain, I thought my friends were a little nutty.

Nowadays, you show up at some stores at 3 a.m. on Black Friday and you’ll be lucky to get a computer cable, much less a computer.

With stores and malls opening on Thanksgiving Day for Black Friday sales, it leaves some of us wrestling with our conscience: Is it right to promote—via our wallets—the desecration of a national holiday in favor of rabid consumerism? Or are we just going along with the times?

As a former retail employee who thought it was bad enough to endure shifts as early as 6 a.m. the day after Thanksgiving to as late as 11 p.m. during the holiday season, part of me believes that I should boycott shopping on Thanksgiving Day to show some solidarity to my brothers and sisters still in the trenches of retail. Then I wonder, am I really doing them any favors by staying away if they are going to have to work anyway? Can one holdout really make a difference? And do the employees care that much? Maybe it helps to be busy. Maybe they relish the excuse to get away from their families. Some may even be getting holiday pay. Also, as many people point out, gas station attendants, nurses, doctors, firefighters, police officers and those in similar occupations work all holidays.

But there is a big difference between filling the gas tank on your way home from your grandmother’s house and stopping off at Target to pick up a new gas grill that happens to be on mega sale.

Poor ol’ Thanksgiving has gotten the short shrift for years. Malls pipe in “White Christmas” before you’ve even placed the order for your Thanksgiving turkey. You no sooner dispose of your Halloween candy and jack-o’-lantern when out come the lighted reindeer lawn decorations and Christmas themed/shaped/colored food. (Actually, who are we kidding? The Halloween and Christmas stuff are often out concurrently.) Is it really any surprise that the day has finally come that we’ve decided to steamroll Turkey Day and dive headfirst into Christmas?

Well, stop the steamrollers, because the tide appears shifting just a little. Some stores and malls that formerly opened on Thanksgiving Day are now choosing to remain closed. And, as a counterpoint to Black Friday, there’s Small Business Saturday, which falls the Saturday after Thanksgiving and encourages shoppers to patron local brick and mortar merchants. Perhaps instead of the big box stores, you’ll find yourself shopping at Fleet Feet for the runner on your holiday gift list or at William Glen for your favorite home chef. Similarly, Record Store Day, which happens twice a year with one of the days coinciding with Black Friday, encourages shopping your local record stores for one-of-a-kind finds available only that day. (Last year, my music-loving boyfriend achieved nirvana at Dimple Records on Arden Way while the rest of the world fought for a parking spot up the street at the mall.)

I am actually glad to see this shift. As much as I love Christmas—and I do love it: the decorations, the festivities, the music, the lighted reindeer lawn decorations, even Christmas themed/shaped/colored food (I’m a sucker for those Goldfish crackers with the “Santa fish” on the package—and I don’t even like Goldfish crackers!)—I also really love Thanksgiving. I love that it is the quintessential fall holiday, much like Fourth of July is for summer. I love that it promotes gratitude—a possible antidote to a lot of the angst in the world today. I love the sense of community and goodwill generated by area Thanksgiving Day fun runs such as Run To Feed the Hungry, the Folsom Turkey Trot and the Elk Grove Gobble Wobble. I love feeling the connection to my late mother while making her famous stuffing recipe and watching snippets of the Macy’s Thanksgiving Day parade in New York City, her hometown and my home for a short bit. And even though I am not a big fan of eating turkey, I love all the turkey-themed decorations: ceramic turkey figurines, turkey cling-ons and cutouts, turkey dishware, turkey napkins . . . hey, we all have our quirks. And when it’s over, I love that it hearkens in my most favorite time of year: Christmas.

But only when it’s over, and not a moment before.