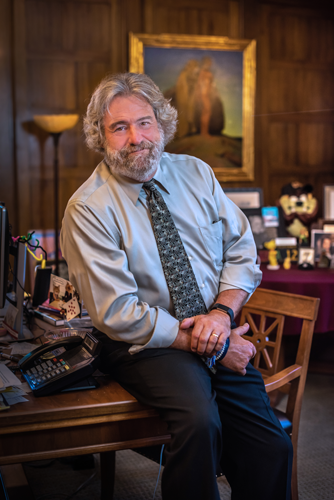 As California’s state librarian, Greg Lucas occupies one of the most impressive government offices in Sacramento: a high-ceilinged, wood-paneled chamber that overlooks the Capitol. Lucas—a former newspaperman married to local public affairs powerhouse Donna Lucas—has filled the stately space with a riotous mixture of pop-culture artifacts, including Grateful Dead memorabilia, Looney Tunes figurines, Star Wars statues and more. “I’m a pack rat,” says Lucas, referring to the items as “all the stuff Mrs. Lucas won’t let me bring home.” Here’s a look at some of his favorite things.

“These are from one of my favorite Looney Tunes cartoons: ‘Duck Dodgers in the 24 ½th Century.’”

Lucas purchased the vintage plate on eBay; it belonged to former Assembly speaker Robert Monagan, who represented California’s 12th District from 1961 to ’73.

“My favorite Disney movie is ‘The Jungle Book,’ and I love Baloo the bear. My philosophy is ‘the bare necessities of life will come to you.’”

Lucas positioned Genie to point toward a Maynard Dixon painting donated to the library by actor Robin Williams, who voiced Genie in the animated film.

The replica plaque is a nod to Lucas’ favorite president, Harry S. Truman. (He also has a signed portrait of Truman.)

“There aren’t many people whose humor lasts longer than their lifetime. But you can still read Mark Twain and burst out laughing.”

“I’ve had him a long time. I saw it on eBay recently. It’s worth a lot of money.”

Yoda holds a flashing lightsaber and says familiar Yoda lines such as “Destroy the Sith we must.” But, says Lucas, “the sound is crappy.”

While preparing for a State Library exhibit on editorial cartoonists, Lucas stumbled across this design by legendary Chicano cartoonist Lalo Alcaraz. “This came up on a Google search, and I loved it immediately.”

A distressed Wedgwood cup and saucer from Fitz Gibbon’s “Cup Runneth Over” series. “I saw it from across the room at the Crocker Art Auction and went, ‘Wow, that is really cool.’ I haven’t gotten around to asking what’s the stuff coming out of the cup.”

Daughter Katie, an artist and animator, designed the cards, which depict the Lucases as superheroes and the Addams family.

These Little Giants figurines of Gandhi, Mao, Che Guevara, Lenin and Stalin were a gift from a friend.

In 2009, while traveling with his daughter in Tokyo, Lucas visited a restaurant supply store. “I wanted to see the plastic food. This was the grossest thing I could find.”

Assembly Speaker Herb Wesson presented this to Lucas. “He’d give these out to reporters and say, ‘Here’s your award for sucking.’”

This novelty toy sits in the middle of the conference table and moos when turned upside down. “In a tense meeting, someone will reach for it, and it breaks the tension.”

These were created on a 3D printer at Santa Monica Public Library. “They’re made of cornstarch, so if you wash them, they disintegrate.”

“I grew up with Gumby and Pokey. My daughter Katie turned me on to the new film studios that do Claymation. I have a new appreciation of the work that goes into Claymation.”

“Other people sometimes use it. I eat M&Ms.”