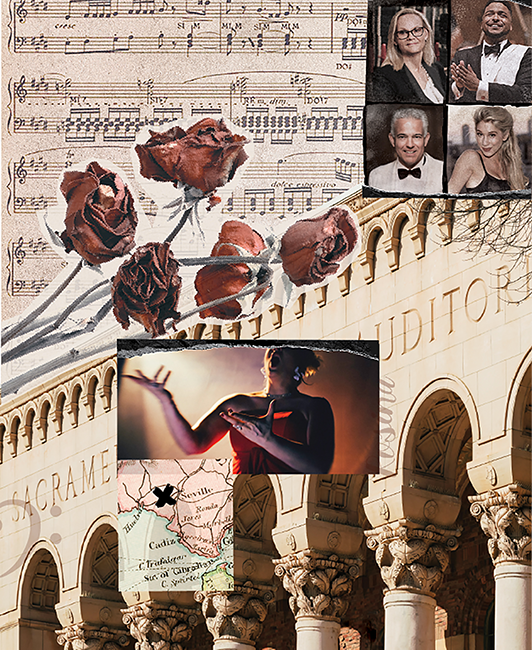 Back in February (a million years ago in coronavirus stay-at-home time), the Sacramento Philharmonic & Opera was gearing up to put on a spectacular production of Gioachino Rossini’s comic masterpiece, “The Barber of Seville.” The opera, which Rossini reputedly whipped up in a frenzied 13 days of composition at the end of 1815, was based on a play written a half-century earlier by French dramatist and arms dealer Caron de Beaumarchais. Set in the Spanish city of Seville in the 17th century, it’s been a staple of the opera world since its debut performance in early February 1816.

During pre-pandemic days at the start of this year, the most important questions facing the staff of Sacramento Philharmonic & Opera were who they should cast in the star roles of Rosina, Count Almaviva and Figaro. The idea that by April much of the world would be operating under social distancing and stay-at-home orders, and that such a thing as a concert performance would be banned—a reckless public health risk—was inconceivable. Slated for April 25, the opera performance was to have been the highlight and the finale of Sacramento’s classical music season, a powerful expression of how far the city had come in its efforts to remake itself as a cultural hub.

In the dog days following the 2008 financial crisis, it was doubtful a professional symphony orchestra and opera company could survive in the state capital. Orchestra seasons limped along post-2008, with ticket sales and donations flagging. In 2014, the Philharmonic & Opera went dark for pretty much an entire season as a denuded board of directors struggled to keep the institution solvent.

“What we needed more than money was expertise in staffing and programming, fundraising, outreach and contracts,” recalls board member Laurie Nelson, a onetime consumer products lobbyist and longtime opera aficionado who joined the board in 2013. Nelson and her colleagues reached out to a group of musicians and administrators in Detroit who had experience working with a big-city orchestra in a troubled financial environment. That group agreed to come out to Sacramento on a rescue mission. And, Nelson recalls, “They made magic happen with the musicians. [They] set up a yearlong programming. They brought us talent way above our pay grade: guest artists and conductors, initially connected with Detroit.”

The years since have been a joyful renaissance. One concert after the next has sold out, cementing the company’s role as a critical part of Sacramento’s cultural infrastructure. In June 2019, the Philharmonic played alongside the megastar Andrea Bocelli at Golden 1 Center before 17,000 screaming fans. Also in 2019, the organization performed what executive director Alice Sauro—who was part of that initial rescue team from Detroit terms a “hologram concert,” with the Philharmonic’s musicians performing alongside a hologram of long-deceased opera legend Maria Callas, and accompanied by Callas’ vocals from an early 1970s performance of a medley of her favorite arias.

On the one night each year when the company puts on a full-scale opera (“Rigoletto” was last year’s production), crowds routinely come to the Community Center Theater dressed to the hilt—men in suits, women in fancy ball gowns. Imagine silver-tipped cigarette holders and monocles rounding out the scene. It’s Sacramento’s version of the Parisian beau monde.

The concert this April was primed to be the ultimate crowd-pleaser. “It’s an old chestnut everybody enjoys,” says board member John Crowe, a retired UC Davis biophysicist. “A period piece that everybody will love.”

Sacramentans can’t see “The Barber of Seville” in person this year, but they can read here what was planned, and they can imagine how opera will one day draw those crowds back into Sacramento’s concert halls. “I look forward to sitting in that darkened room and hearing the human voices, and the conductor and the musicians and the audience and everyone is going on this emotional path,” says Nelson. “We’re experiencing the most amazing thing human beings are capable of.”

So sit back, relax, take out your opera glasses, press play on a classic recording of Rossini’s classic—the version I have been listening to recently, recorded in London in 1957, stars Maria Callas, Luigi Alva and Tito Gobbi—and, from the safety of your armchairs, let the show begin.

Rossini’s opera, says Matt Buckman, general manager of the Sacramento Philharmonic & Opera, “has some of the most iconic tunes in the history of the art form. The story is timeless: a girl who falls in love with a boy.” The girl’s guardian, the lecherous Doctor Bartolo, won’t let her out of the house because he hopes to someday marry her himself. “And the plot itself is absolutely ridiculous—which makes it absolutely operatic.”

Rosina is in love not with her guardian but with Count Almaviva, a dapper if somewhat tongue-tied suitor who enlists the help of the local barber, the bombastic, happy-go-lucky Figaro, to help him break through the doctor’s embargo and communicate with the girl of his dreams. Eventually, through a series of ludicrous escapades, some of which involve deploying Figaro’s barbering skills against the hapless doctor, Rosina and Almaviva manage to secure enough time together to tie the knot. Mission accomplished, cue the applause.

The music is lush and velvety. It pulls you in and swaddles you with comforting melodies, then it unbundles you and—with startling rapidity—launches you up toward the sky. It’s breathtakingly fun, daring, even swashbuckling in tone. It’s mischievous yet tear-coaxing. The renowned early 20th-century opera critic Ernest Newman wrote in his classic book, “Stories of the Great Operas and Their Composers,” that “Rossini’s immortal work is the finest flower of the older Italian musical comedy.”

For Sacramento’s production this year, the director, singers and stage-set designer were slated to come from New York, Chicago, Seattle and elsewhere. The show—to be held in Memorial Auditorium—would be in the round, with the stage and singers on the floor of the vast building, and the audience ringed above them on upper levels. Paradoxically, the vastness of the space would be parceled up to create an illusion of intimacy.

“I was excited to come work with Sacramento Opera,” says 35-year-old Jennifer Williams, the Brooklyn, New York-based director. She specializes in immersive productions designed to intimately draw audiences in. “The company had an inventive and adventurous approach. They wanted to use space in a more adventurous way.”

Williams, originally from Virginia, lived in Berlin, Frankfurt and Stuttgart before settling in New York. She was fascinated by Memorial Auditorium’s history as an arena for boxing fights and exhibition tennis matches. She decided early on that she would take the singers off of the raised stage and move the action to floor level. She would use the soaring balconies and tiered seating above as entrances for her performers; they would act and sing and project their voices from multiple spots throughout the concert hall, “so the story really surrounds the audience.”

The stage set that Williams and the designer Mariana Sanchez created was inspired by the artist René Magritte. “It’s up close and personal, interactive. It distills the story to its essence. It’s a 360-degree approach to storytelling,” Williams explains. For Sanchez, who has an undergraduate degree in architecture from UNAM, the large public university in Mexico City, and a graduate degree from the Yale School of Drama, the opportunity to work with Williams was a dream come true. “She’s very experiential and open,” says Sanchez. “She was interested in acknowledging the architecture of the space.” Speaking before the shutdown forced the performance’s cancelation, Sanchez said she made a decision to “do something bold but affordable—since it’s only a singlenight production. We are going to use the space where normally the audience is sitting. We are taking inspiration from Seville—a red, round surface, a metaphor for a bull-fighting ring. The outdoors will be surrounded by flowers and greenery.”

Spending only a fraction of the amount typically spent on a production by internationally renowned venues such as New York’s Metropolitan Opera or London’s Covent Garden, the director and the designer hoped nevertheless to use the space to help their audience time travel. They envisioned staircases leading up to a central platform, surrounded by a translucent curtain, with the surrounding space cordoned off by thicker, industrial-type plastic drapes. Brush aside the curtains and, with a little bit of collective imagination, a scene out of 18th-century Europe would appear.

“The story premiered in 1816, but it’s very modern,” says Williams. It “has a very revolutionary spirit to it. It’s about this young woman who refuses to be confined, and she teams up with a very unlikely group, including the barber of Seville, who is mastermind of the plan to liberate her.”

That barber, named Figaro, is one of the great characters in the opera canon. Chris Kenney, a 28-year-old Chicago resident and a resident singer at the Windy City’s Ryan Opera Center, knew he had struck gold when he got the part. It would be, he said, “like riding lightning. I love it. Figaro, he’s a character, man. He owns the stage, owns every situation he’s in. It’s a hoot. It’s really restorative. He’s a high-energy character, constantly thinking about the next big thing. And everyone loves him.”

Three weeks before Kenney and the rest of the cast were due to fly into Sacramento to start rehearsals, Gov. Gavin Newsom ordered the state’s residents to stay at home and all nonessential businesses to close. The opera production was abruptly canceled. For Sacramento’s opera lovers, the cancelation of this year’s one performance was a bitter blow. They didn’t get to see Kenney playing Figaro, or the young mezzo-soprano Maya Gour in her breakout role as Rosina. They didn’t get to experience the sights and the sounds of Rossini’s masterpiece filling the huge space of the Memorial Auditorium.

But when pandemic conditions ease up, the music will begin anew, and audience members will once more have the confidence to sit together while watching magic unfold. “These audiences in Sacramento enjoy it, appreciate it and can’t wait for the next one,” says Alice Sauro. “The fact we’re selling out concerts on a regular basis has been thrilling, considering we were dark five years ago.”

The CD with Callas and Alva and Gobbi ends. I lift myself up out of my leather armchair, stand, shout out “Bravo!” and clap as enthusiastically as if I were in the auditorium on J Street. We shall, I know, find ways to persevere.