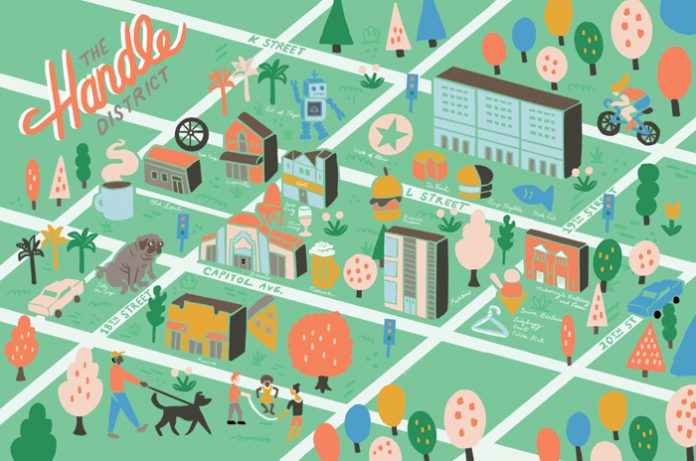 The Handle District may be the biggest little neighborhood in town. Belted by 18th and 19th streets in one direction and L Street and Capitol Avenue in the other, this one-square-block area is a destination it its own right.

While the neighborhood has been cherished for its dining options for years, it wasn’t until 2011 that a collective identity emerged. As for that name? Simple: If you were to take an aerial shot of midtown, the neighborhood looks like a handle to the Capitol’s pan. “A couple drinks may have been involved in the naming process,” admits Seann Rooney, executive director of the Handle Business Improvement District.

The Handle plays host to some of the most beloved food institutions in town: The Waterboy, Aïoli Bodega Española, Paesanos, Zócalo and Mulvaney’s B&L have each been at the vanguard of the Sac food scene for years. Then there are the shopping, cafes, breweries, residential lofts, historical architecture, trees and lighting and parklets. “The neighborhood is super concentrated with all kinds of outstanding business operators,” says Rooney. “It has a very eclectic and very hands-on, noncorporate business presence all in one square block.”

The nature of the neighborhood is that there is something for everyone. With such a dense aggregation of restaurants, bars and boutiques, it’s easy to come in without a plan and blindly find a killer meal, cocktail or shopping experience. “There’s a focus on spontaneous joy in showing up in a place that is so rich in vibrant people and food and architecture,” says city councilmember Steve Hansen, whose district includes this hot spot. “You don’t have to go far to get a lot in the Handle.”

FROM CARS TO CARNITAS
In terms of architecture, the crown jewel of the neighborhood is undoubtedly the Arnold Brothers Building, which was built in 1925 as a Hudson Essex car dealership. It is now home to the trendy and popular Mexican eatery Zócalo, whose owners restored it to handsomely emphasize its Spanish revival architecture and to call to mind the town square in Mexico City. Around the corner, Scout Living’s space was once the repair garage for the dealership, and sharp-eyed furniture shoppers can still spot the dip in the floor where the pit used to be.

BEER SNOBS WELCOME
Two breweries call the Handle home: Fieldwork Brewing, where visitors can pair sandwiches from the kitchen at Zócalo with their sampler flights, and Big Stump Brew Co., which offers award-winning beer as well as events like beer yoga and Super Smash Bros. tournaments.

BASTILLE DAY FESTIVAL
The most popular event in the district is the Bastille Day Waiters’ Race, in which local servers race each other around the block with drinks on a platter. The free event takes place on the second Sunday in July, and proceeds from attending vendors go to charity. Last year, the race raised $1,000 for I Got Your Back, a project that aims to raise awareness of mental health issues in the restaurant industry.

LET IT RIDE
Check out the beautiful track frames at Velo Trap, the tiny but mighty consignment bike and repair shop tucked next to Old Soul in Liestal Alley. 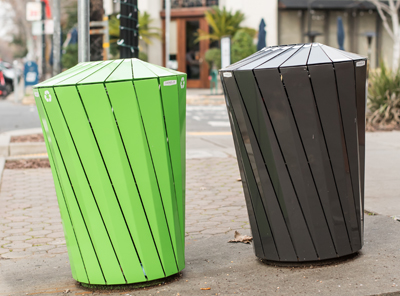 $2,000
The cost of each of more than 20 award-winning trash cans in the neighborhood. These garbage receptacles were procured from the same designer and manufacturer as the acclaimed trash cans in New York’s Central Park. 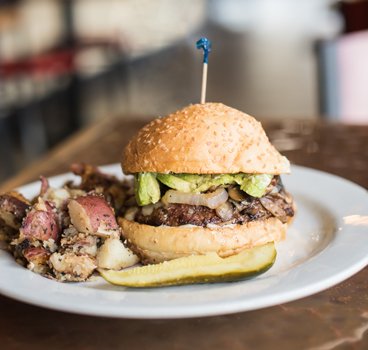 BURGER BATTLE
“The burger at Crepeville is deeply underappreciated,” says Scout Living owner Stefan Bloom. In fact, he’s willing to say he’d pick the Crepeville Burger over any of the offerings at nearby Burgers & Brew—a controversial take, but he’s speaking truth to power.

BEST PLACE TO BUY AN EAMES CHAIR
The highest-end midcentury and Danish modern retailer in town has to be Scout Living, located in the heart of the district. The store started in San Francisco before opening as a brick-and-mortar in Sacramento in 2011. Fun fact, according to owners Stefan and Erin Bloom: Lamps were the most popular item in San Francisco, but Sacramento? “Sacramentans are buying up dining tables and credenzas like crazy.”

THE NEW MAYOR OF MIDTOWN
Tatty the Pug, the 9-year-old shop dog at Scout Living, has been unofficially elected in the court of popular opinion as presiding ruler over midtown (especially since the other mayor, fat cat Norm Lopez, passed away this past December). Swing by this chic furniture store and you’re likely to catch Tatty sunning outside or luxuriating on his red velvet chaise lounge.

SOULFUL SIPS
Looking at it now, you’d have a hard time guessing that Old Soul Co. was once a storage warehouse for the Eppies chain of restaurants. The brick-and-wood beam construction, cozy furniture and huge windows make this roastery-bakery one of the most attractive hangouts in the area. Now a local institution with multiple locations, the cafe had humble—and somewhat hodgepodge—roots: It lacked a cash register in its first year of business, so customers paid for coffee or pastries by dropping $2 payments into a jar.

BATTERIES NOT INCLUDED
“Art of Toys is one of my favorite places to take out-of-town guests with their old-world toys and great art displays,” says Emily Baime Michaels, executive director of the Midtown Association. Art of Toys owner Terri Rehg opened this art gallery/toy shop with the mission to represent toys as art and art as toys.

GET YOUR WINE GEEK ON
Two of Sacramento’s best wine bars are a grape’s throw from each other in the Handle. At The Rind, you can brush up on your more obscure varietals—Negroamaro, Blaufränkisch and Picpoul have all recently made appearances on the rotating wine list—or try out a private wine-and-cheese tasting guided by co-owner Sara Arbabian. Down the street at 58 Degrees & Holding Co., the wine list offers patrons the opportunity to sample a wide array of Old and New World wines by the glass or to toss back a few Chambongs (a Champagne-bong hybrid, for the uninitiated) along with upscale New American cuisine.

WHERE EVERYBODY KNOWS YOUR NAME
The real insider watering hole in the area is not a craft brewery or a cocktail lounge, but the bar at Mulvaney’s B&L. While Mulvaney’s is famous for being a leader of the farm-to-fork movement, the oft-overlooked bar is where locals gather to loosen up in safe company—namely, Dan the bartender. “It’s fun, it’s homey, and it feels like a small town or neighborhood kind of thing,” says Ginger Hahn, owner of Ginger Elizabeth Chocolates. “Not to mention Dan makes the best Greyhounds there are.” Hahn is certainly not alone in her predilection. “Love sitting at that bar,” says Sara Arbabian, co-owner of The Rind.

60 MINUTES
The average wait time for Sunday brunch at Pushkin’s, the gluten-free restaurant that caters to foodies and health nuts alike with its chic decor, dog-friendly patio and highly Instagrammable menu. An hour may seem like a long time to wait for avocado toast or shakshuka, but the social media clout makes it worth it. Oh, and the food is worth it, too. Staff recommends checking the live wait time on Yelp to avoid showing up at a too-popular timeslot.

BIKES ENCOURAGED
There are four bike corrals and 75 bike parking spaces in the district, with bike pole racks on the parking meters and one of the first Jump bike racks in the city. Of course, with all that bike parking, actual car parking is scarce. Visit the district on two wheels or expect to park several blocks away.

DOUGHN’T EVEN NEED TO ASK
At Paesanos, kids are given free balls of pizza dough to play with while their pizzas are baking.

SHOP TALK
If an onslaught of fantastic restaurants, wine bars and brew pubs isn’t your thing, then first, what’s wrong with you? But second, you’re in luck: The Handle District manages to squeeze in a few quality shopping options, too. Ladybuggz, Heart and Felicia Strati are three back-to-back-to-back clothing boutiques that offer women’s fashion, from high-end European imports to trendy casual threads.

THE SWEET SPOT
On warm nights, Devine Gelateria makes for the perfect stop for a cold and creamy nightcap. Owner Elizabeth McCreary studied at Carpigiani Gelato University in Italy before opening her gelato and sorbetto storefront in the Handle.

1.5%
The extra assessment, essentially a tax, on food and beverage (excluding wholesale items and alcohol) in the district, which is noted at the bottom of all receipts. The money goes back to the business association, which in turns uses it to fund projects that benefit and beautify the district.

GINGER’S RECOMMENDATIONS
Ginger Elizabeth Chocolates may be taking the Bay Area by storm now that the acclaimed chocolatier and pastry chef has a popular second storefront in Cow Hollow, but Sacramentans haven’t forgotten that it all started in the Handle District. It’s tempting to order one of everything in this lauded sweets boutique, which recently got a shout-out for its bonbons in Martha Stewart Living. If the options feel overwhelming, owner Ginger Hahn recommends trying these items first:

SUSHI, SUPERSIZED
At Make Fish, poke bowls are the bread and butter but sushi burritos—sushi rolls the size and shape of a Chipotle burrito—are the real stars. Patrons can craft their own or choose one off the signature menu, like the Triple Sashimi, which includes tuna, salmon, albacore, guacamole, green onions, masago, sunomono, wake salad, rice crackers, tamago and spicy mayo, all wrapped in a layer of rice and sealed in a sheet of dried seaweed. 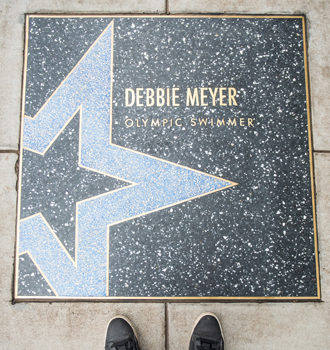 WALK OF STARS
The Handle District features a bit of Hollywood glamour with its own sidewalk Walk of Stars, which honors local legends including actors Pat Morita, Molly Ringwald and LeVar Burton, Olympic swimmer Summer Sanders and artist Wayne Thiebaud.

CROSSOVER APPEAL
Old Soul Co. and Ginger Elizabeth know that some things, like coffee and chocolate, are just made to go together. That’s why the two decided to collaborate, with Ginger Elizabeth using Old Soul’s Brazilian coffee to flavor the caramelized milk and coffee bonbon and Old Soul crafting mochas with a custom hot chocolate blend from their chocolatier neighbor. 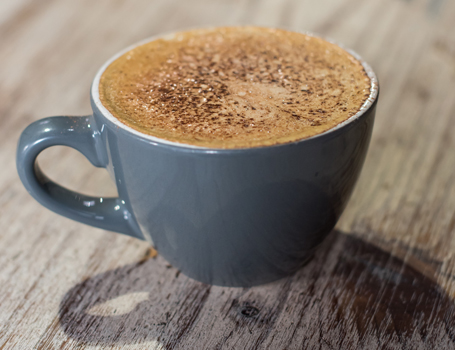