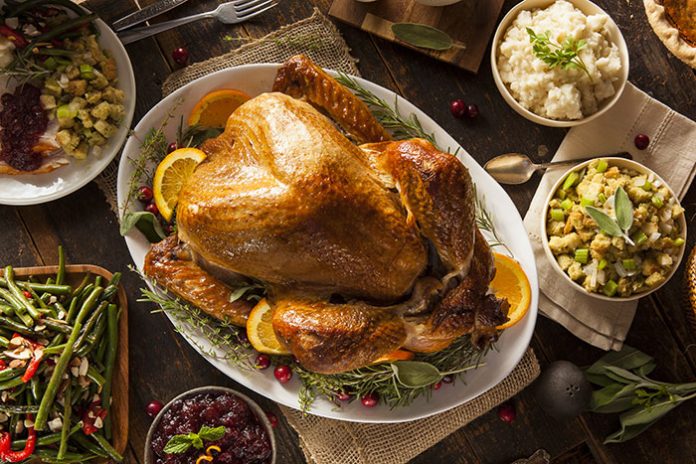 As the holidays descend upon us in this absurdly strange year, let us carve out a little time amid the strangeness to reflect on the sustainability of a traditional Thanksgiving meal.

As a place to start, let us consider a state-by-state comparison of the carbon footprint imposed by the ultra-American feast. The Dietrich College of Humanities and Social Sciences of Carnegie Mellon University four years ago reported that in California, one person’s meal of roasted turkey stuffed with sausage and apples, green bean casserole and pumpkin pie is, on average, responsible for 22.2 pounds of carbon dioxide being released into the atmosphere.

That might at first blush sound alarming, but having that same meal in West Virginia would result in a CO2 emission of 80.1 pounds. However, if you were to partake of those same festive things in Vermont, only two-tenths of a pound of CO2 would be emitted.

The research team “based their calculations on the way the meal is cooked (gas versus electric range), the specific state’s predominant power source and how the food is produced in each area,” Carnegie Mellon explained. “States that rely mostly on renewable energy emit the lowest amounts of carbon dioxide, a greenhouse gas that is tied to climate change. States that use coal power . . . have the highest carbon dioxide emissions.”

If you drive to someone else’s home for Thanksgiving (a pre-pandemic ritual that probably will not be happening as often this fall), count on your car adding one pound of CO2 emission for each mile you drive.

Taking a plane? “Four people who fly 600 miles round trip have a carbon footprint 10 times that of an average prepared Thanksgiving meal, before they even sit down at the table,” Carnegie Mellon reported.

The good news about turkey and its poultry-dish cousin, chicken? Their environmental impact has been judged to be lighter than beef (by far) and pork (by a little). The bad news, of course, includes the fact that turkeys’ lives are constrained and shortened so that you can indulge in the traditional dish.

Also worth noting is that Thanksgiving feasts can result in quite a bit of food waste. How many of us have left things as they are on the table—serving bowls half-filled with gravies and veggies, unfinished glasses of sparkling ciders or pitchers of milk, carved-up turkey bits already more than an hour removed from the oven—to assemble around the TV to watch football, or venture outside to walk it all off? A lot of that stuff we left on the table probably will end up getting tossed.

The U.S. Department of Agriculture has estimated that between 30 and 40 percent of the nation’s food supply goes to waste. Surely we can do better than that, and quickly putting Thanksgiving foods in the fridge before you start watching yet another Detroit Lions loss seems like a reasonably responsible and easy thing to do.