How’s this for an elevator pitch: Airbnb for swimming pools. That’s the idea behind Swimply, an app that enables people with swimming pools to rent them out to strangers by the hour.

“It works just like Uber or Airbnb,” says local entrepreneur Sonny Mayugba, who met Swimply’s founder while working at a venture capital firm and recently became vice president of revenue for the startup. “On the host side, you have this asset that you can put on the platform and rent out. On the guest side, you’re getting access to these underutilized assets.”

It was probably only a matter of time before swimming pools joined the sharing economy. A pool is basically an expensive hole in the ground, requiring lots of maintenance and upkeep. And once the novelty of owning a pool wears off, many people don’t use it very often. So why not share it with others—for a profit?

Swimply has thousands of active hosts in the United States and Australia, with more than two dozen in the Sacramento region. Rental prices range from $15 to $75 per hour; local offerings run the gamut from a lap pool in Folsom to a resort-style mega pool in El Dorado Hills complete with waterfalls, diving rocks, a water slide, kiddie pool, swim jets and a cave. Some pools come with a hot tub, outdoor shower, fire pit, lounge furniture or a private changing room. One pool, in Mather, even offers a five-hole putting green, basketball court, cornhole, pingpong, darts and mini fridge. Party time! 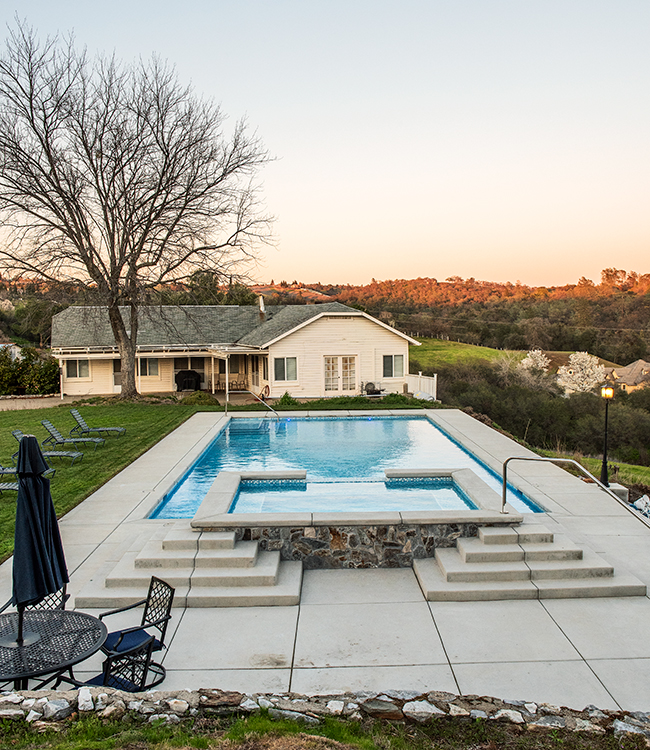 Swimply renters use their borrowed pools to swim, of course, but also for photo shoots, business meetings, birthday parties and date nights. Like people who rent out rooms in their homes through Airbnb, Swimply hosts are often naturally hospitable types who enjoy sharing their surroundings. And the money ain’t bad: The company’s two top hosts each cleared more than $40,000 last year, says Mayugba. “In the Sacramento area,” he notes, “some people are making thousands a month.”

With its everyone-in-the-pool ethos, Swimply has made a splash in the media: Last year, its 22-year-old founder appeared on ABC’s “Shark Tank” trying to raise capital. (The Sharks didn’t bite.) And comedian Bill Maher recently joked about the company on his HBO show “Real Time”—something about not wanting a stranger’s kids peeing in his pool. What a party pooper.