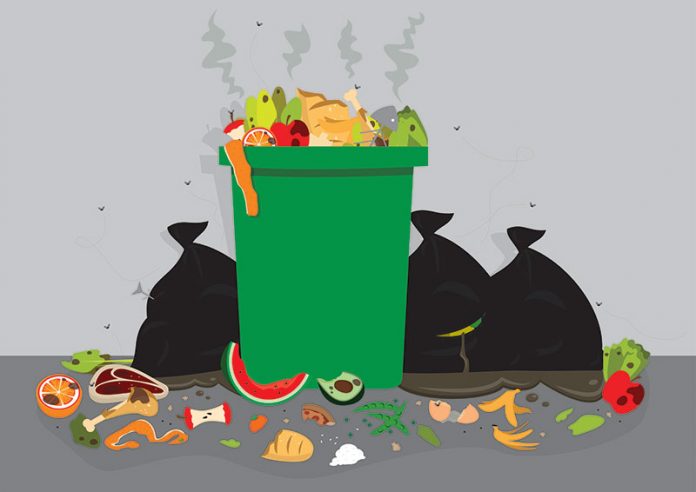 Christmas is sometimes referred to as Xmas, which sort of rhymes with excess.  Which is sort of a clunky way of introducing this month’s sustainability topic: food waste.

Yes, it could be argued that a lot of things besides food are wasted during the holiday season, including wrapping paper, time spent watching football games, and people who are stressed out and have liberal access to booze. Food, however, represents an especially big waste.

I Love a Clean San Diego, an environmental group that strives to make humans interact less destructively with the environment, recently took up the topic of food waste and how it accelerates this time of year.

“About 40 percent of all food produced in the U.S. never gets eaten,” ILACSD said in an online post last year. “In fact, between Thanksgiving and New Year’s Day, Americans waste 25 percent more than during the rest of the year. During the holidays, millions of pounds of uneaten turkey, gravy, green beans, mashed potatoes and other seasonal trimmings unfortunately end up in landfills.”

Tossed-out food is an example of organic waste, a phrase that also encompasses “green material, landscape and pruning waste, organic textiles and carpets, lumber, wood, paper products, printing and writing paper, manure, biosolids, digestate and sludges.” That is as defined by the California Department of Resources Recycling and Recovery, known more simply as CalRecycle.

According to that agency, organic waste that is placed into California landfills accounts for 20 percent of the methane that pollutes our skies. Organic waste is the state’s third-largest emitter of methane, “a climate super pollutant 84 times more potent than carbon dioxide.”

CalRecycle is especially busy these days because it is spearheading a breakthrough in how California will confront the problems associated with organic waste. Five years ago, Gov. Edmund Brown Jr. signed into law Senate Bill 1383, which mandates that the state reduce emissions of short-lived climate pollutants in two steps: cut organic waste disposal 50 percent by 2020 and 75 percent by 2025. Enforcement of these goals begins on Jan. 1, 2022.

“Jurisdictions can select from a variety of organic waste collection services to match their unique communities and local infrastructure,” CalRecycle says, “while producing clean streams of organic feedstock that can be recycled into high-quality, marketable recycled products, including compost, renewable natural gas, electricity and paper.”

The city of Sacramento is working to comply with the new law, and in the coming weeks it plans to share more information about the specific steps it will be taking, and what residents can expect will or won’t change in how they dispose of their household waste.

“Methane emissions resulting from the decomposition of organic waste in landfills are a significant source of greenhouse gas emissions contributing to global climate change,” the city, getting into the SB 1383 spirit, says on its website. “Food waste alone accounts for approximately 17–18 percent of total landfill disposal. Increasing food waste prevention, encouraging edible food rescue, and expanding the composting and diversion of organic waste throughout the state will help reduce methane emissions from California’s landfills.”

SB 1383 contains a second goal, beyond its targeting of methane: It calls for 20 percent of what has been surplus food to be made available for people who lack access to adequate food. According to a September story by Newsweek, two out of every 10 Americans do not have enough to eat.

So as the holiday season rages on in all its excess glory, take a moment to be thankful for what you have and to perhaps think about how you might be able to make do with less organic waste.