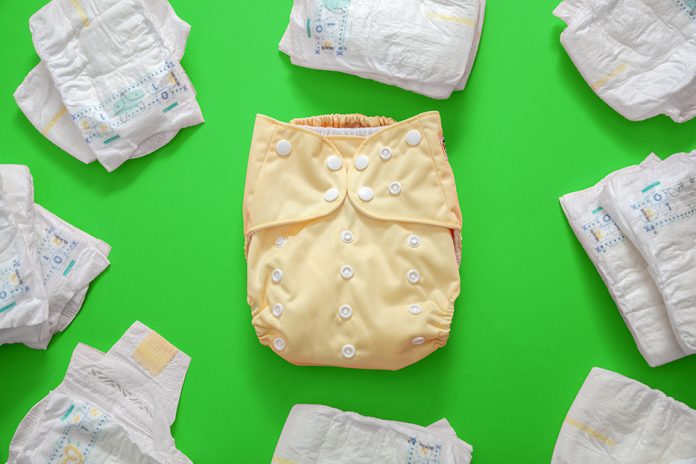 If you use or used disposable diapers on your children, or even if your parents used them on your own baby self, those one-and-done stinkers are probably still wholly intact in some landfill.

Several hundred years from now, they might decompose to the point where if exhumed they will not be immediately identifiable as diapers. In the meantime, they will have exposed all matter of nasty things to the soil and water that surround the landfill.

No, we refer not to the babies’ urine and excrement. Rather, these “nasty things” are chemicals used to make Pampers, Huggies and their ilk soft, odor-neutralizing, absorbent and cheap. Two years ago, freelancer Andrew Karpisz listed some of those chemicals in a story (“The Effects of Disposable Diapers on the Environment and Human Health”) he wrote for the online publication Unsustainable. Here’s how he described them:

Tributyltin, a biocide that is “poisonous to marine life as well as humans. It damages fertility, unborn children, and our organs. TBT can be fatal if inhaled and doesn’t degrade.”

Dioxins, organic pollutants used for bleaching that are “carcinogenic and linked (to) long-term health problems.”

Sodium polyacrylate, an absorbent stuffing. “Menstrual pads containing this compound have been implicated in cases of toxic shock syndrome.”

Volatile organic compounds that “are quickly released into the air when exposed to heat.”

Plastics and polymers that are nonrecyclable.

Phthalates, which might appear in diapers’ adhesives, dyes and perfumes. “People of any age can have adverse reactions to phthalates, but unborn babies and young children are potentially more susceptible.”

Are reusable cloth diapers easier on the environment? A few years ago, Courtney Schley addressed that topic in The New York Times. She pointed out that disposables constitute 7% of all household waste in landfills, and any company’s claims that they are compostable or biodegradable are suspect. They are No. 2 (ironically?) behind clothes.

Cloth diapers, Schley pointed out, tax the environment with their laundering needs (water, power and soaps). However, if washed as part of full loads, dried when possible on a clothesline and passed on to second babies or other families, cloth diapers can clearly out-green disposables. “Cloth diapers are not necessarily more environmentally friendly, but if you’re particularly careful about how you acquire and wash them, they are likely to be,” she concluded.

For those parents who are leery of throwing cloth diapers in with the rest of their laundry, for reasons psychological (“Ew!”) or . . . well . . . maybe there is no better reason than that, there are obvious things to do before washing cloth diapers, such as shaking them over a toilet, but there are also some subtler steps you can take. Whattoexpect.com has some ideas, including sprinkling baking soda on the dirty diapers and presoaking them overnight.

Sacramento has diaper services, including Tidee Didee Diaper Service, in business since 1954—meaning it predates the disposable diaper era. The way it works is you purchase a “starter package” ($50–$60) that includes a hamper, covers and deodorizer discs, then pay a weekly fee ($21–$27, a bit more for thick and/or larger diapers) based on how many diapers you cycle through. Pickup/drop-off occurs weekly, and there is no cancellation fee.

Disposable versus cloth. Still can’t decide which is a better option? Perhaps you should table it until you have more time to reflect.