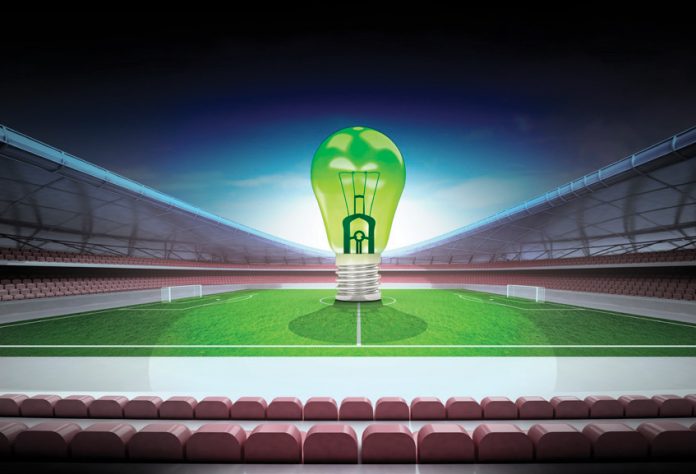 Springtime means the return of baseball, which triggers feelings of warm nostalgia in many of us “seasoned” fans. As kids we liked to play, and all our lives we have enjoyed attending games.

But . . . has there been an environmental price paid for our love of baseball and other sports? Sorry, that is the uncomfortable question that is being asked and addressed in this month’s bitter-pill sustainability column.

Let’s start by assessing the environmental cost of sports adoration at the individual level, and use carbon footprint as the metric. (Google defines “carbon footprint” as “the amount of carbon dioxide and other carbon compounds emitted due to the consumption of fossil fuels by a particular person, group, etc.”) In the interest of full and honest disclosure, I will use myself as an example.

Every spring for 24 years, I flew or drove, and sometimes flew and drove, to constitute two visits to Greater Phoenix to attend a few Cactus League baseball games. That city is roughly a 90-minute flight, or a 775-mile drive, from Sacramento. Justenergy.com’s simplified carbon-footprint formula suggests you consider every sub-four-hour flight as producing 1,100 pounds of CO2, and each roadway mile as tallying .79 pounds.

That means every time I flew round-trip to Phoenix, the carbon footprint of my base transportation alone was 2,200 pounds. For driving, it was 1,225 pounds.

Combine that with all the flying and driving around I did in the late 20th century to ballparks all over the country and, by sustainability standards, I am a swing and a miss.

Taking a big step back, Tayllor Henczel recently blogged on tentree.com that 85% of greenhouse gas emissions linked to professional sporting events are generated by the travel and accommodation of spectators. “When FIFA [Fédération Internationale de Football Association] was held in Russia in 2018, 5 million fans made their way over to spectate,” she wrote. Their travel and accommodations generated “the same emissions of 500,000 homes’ yearly electricity.”

Then there’s the environmental cost of the sports themselves and their stadiums/ arenas. Those costs range from the micro (leather shoes and gloves, “pigskin” balls, etc.) to the macro (all the materials needed to make major venues and the energy required to run them). And returning to the fans for a moment: They tend to eat and drink at games. Lots of food, lots of drink, dispensed in lots of one-use containers.

Several sports franchises are addressing this issue aggressively. In a May 2021 post on greenbiz.com, sustainability expert Kristen Fulmer cited the example being set by the Forest Green Rovers, a soccer team based in Gloucestershire, England. The Rovers have been “nominated by FIFA as the World’s Greenest Football club for their Another Way framework, which includes the procurement of 100 percent renewable energy, an organic football pitch, electric-powered equipment and even 100 percent vegan food and beverage at concessions.” Fulmer added that closer to home, “the National Football League’s Philadelphia Eagles incorporate on-site renewable energy generation including 11,108 solar panels and 14 wind turbines that line the top of the stadium to provide about one-third of the stadium’s energy. The Seattle Seahawks and New York Yankees lead composting initiatives to divert food waste from landfill, and stadiums such as Mercedes-Benz in Atlanta and the new Climate Pledge Arena in Seattle leverage sophisticated equipment to reduce energy consumption.”

What about Sacramento’s big-time professional sports franchise, the basketball Kings? Their home, downtown’s Golden 1 Center, reportedly is the first full-service LEED Platinum certified sports stadium in the entire world. It is powered by solar power.

The Kings’ home court, if not the team itself, is a winner.