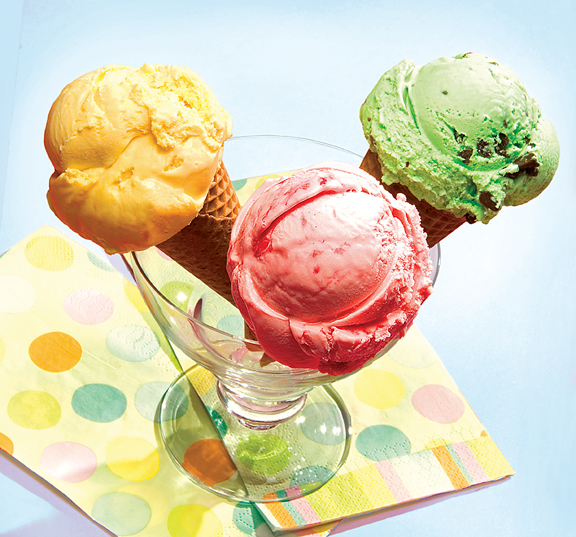 2. Swing over to Allstate Stadium at the Westfield Galleria at Roseville to watch the Sacramento Capitals play World TeamTennis. On July 13, tennis hottie Anna Kournikova heats up the court when the St. Louis Aces come to town.

3. Start the weekend on a high note at Friday Night Concerts in the Park from 5 to 9 p.m. in Cesar Chavez Plaza. The concerts, which showcase buzz-worthy bands and musicians with local ties, not to mention a beer garden, run through Aug. 14.

4. Sample this year’s medal winners from the California State Fair Commercial Wine Competition in one convenient and convivial spot. Get your sip on July 9 at California’s Grape & Gourmet, held at the Sacramento Convention Center.

5. Enroll your kids in art classes at the Crocker Art Museum. Taught by local artists, the workshops cover a range of media, from printmaking and painting to sculpture and cartooning.

7. Rent a movie—for just $1—from a Redbox vending machine at Raley’s/Bel Air stores and other locations.

8. Take your city-dwelling kids to the country to see where their food comes from. Blossom Hill Farm in Auburn welcomes visitors. Call first: (530) 888-1101.

9. Cheer on the triathletes and relay teams at Eppie’s Great Race 36 on July 18 along the American River Parkway. Best places to watch: William Pond Park in Carmichael, where the runners start, and across the bike bridge at River Bend Park in Rancho Cordova, where the cyclists whiz by and the kayakers later paddle to the finish line.

10. Savor the small-town spirit of the Winters Farmers Market at Rotary Park. On Sundays from 8 a.m. to noon, check out the offerings from Spring Hill Cheese Co., Solano Mushroom Farm, Quinta Do Sol olive oil, Berryessa Gap winery, Capay Organic and others.

12. Take a full-moon kayak trip at Sac State Aquatic Center in Gold River ($30). All equipment is provided and all paddling levels are welcome (10 and older). Dates this summer: July 3, July 31 and Aug. 7.

13. Add these books by local authors to your summer reading list: Kill TV by Diane Dean-Epps, Tibetan Adventure by Jack L. Parker, The Sacred Well by Antoinette May, How To Create and Maintain an Alien—An Insider’s Look at Criminals and Their Culture by Arthur L. Mattocks, Ph.D., and The Doomsday Key by James Rollins.

14. See Fourth of July fireworks in style. For $245, you get a private, half-hour, birds’-eye viewing of all the fireworks in the valley from Kevin Franks’ helicopter. Starting in Auburn, Franks flies over the foothills and across the valley in his four-seater chopper. Call (916) 752-6457.

15. Put your boat in at Discovery Park ($12 launch fee). Head out on the Sacramento River to join the speeders and partyers, or find a shady spot near shore and nap the afternoon away.

16. Explore the new Clarksburg Branch Line Trail in West Sacramento by foot or trail bike. The 3.2-mile path starts across the street from the Barge Canal Recreational Access point on Jefferson Boulevard and stretches south to end just before Gregory Avenue. As you head down the trail’s compacted recycled-concrete surface, keep an eye out for the cottontail bunnies that populate the area.

17. Cool off with a pear fruit freeze at the Courtland Pear Fair, held the last Sunday in July.

18. Send the kiddies to a different kind of day camp at Effie Yeaw Nature Center, a 77-acre nature preserve within the American River Parkway. Summer Fun Days Day Camps, one to two weeks long, offer nature walks, crafts, rock climbing and rafting. Kids will get a kick out of spending their days among the wildlife that inhabit the preserve, including deer, turkey, birds, snakes, owls and rabbits.

19. While midtown is the place to spend Second Saturday, check out a few of the area’s other art gallery walks: Third Saturday Art Walks take place in both Roseville and Placerville, and Davis holds its ArtAbout on the second Friday of every month.

21. Take a $10 improv class at Sacramento Comedy Spot on Broadway.

22. Celebrate your independence a day early with a baseball game and fireworks spectacular at Raley Field. On July 3, the River Cats take on the Fresno Grizzlies at 6:35 p.m., followed by a fireworks show.

23. Spread out a blanket and catch a live show under the stars at the Fair Oaks Theatre Festival. This summer’s plays: She Stoops To Conquer (through July 26) and The Fantasticks (Aug. 14–Sept. 13).

24. Board the monorail at the California State Fair (Aug. 21–Sept. 7). It snakes high above the crowds, treating you to a spectacular view of the midway’s neon lights below.

25. Even Humpty Dumpty will be swaying to the music during Fairytale Town’s Twilight Concert Series. The Wednesday evening concerts—July 8 and 22, Aug. 5 and 19—are $10 for adults, free for children 12 and younger.

27. Hold your family reunion at Royer Park in Roseville. It has a lighted ball field, tennis and basketball courts, and a horseshoe pit.

28. Hop aboard! The Sacramento Valley Live Steamers Railroad Museum offers train rides for a $1 (or more) donation at Hagan Community Park the first Saturday and third Sunday of the month through October from noon to 4 p.m.

29. The nutburgers at Sunflower Natural Foods Drive-In are legendary, but so is the wait on hot summer nights. If you don’t want to hang out with the feral chickens in the parking lot while the mellow crew of this Fair Oaks Village institution handcrafts your order—it can feel like an eternity when you’re hungry—call your order in ahead of time: (916) 967-4331.

30. Learn firsthand what it is about the Jonas Brothers boy band that makes the young girls scream when Kevin, Joe and Nick blaze into Arco Arena on Aug. 4.

31. Reserve Aug. 1 for Saturday Night in the Park, put on by the El Dorado Hills Community Services District. The event features music, arts-and-crafts vendors and a bounce house for the kids.

33. Get out in nature and meet new friends on a Sierra Club hike. Hike locations and intensities are all over the map, so there’s something for everyone.

34. Grab three adventurous friends and head to Roseville’s Golfland SunSplash to tumble together down the Stormrider, the area’s first waterslide built for a gang ride.

35. Be a tourist in your own town: Take a guided tour of the Leland Stanford Mansion State Historic Park. The Victorian-era structure served not only as home to Gov. Leland Stanford but as the office for two other governors.

36. Be a kid again at Screen on the Green, held the first four Saturdays in August at Sacramento-area parks. The family-friendly movies—Babe the Gallant Pig, Bee Movie, Beauty and the Beast and The Parent Trap—are appropriate for kids of all ages.

37. Pack a picnic and head to Comedy Under the Stars at Elk Grove’s Laguna Town Hall on July 17 and Sept. 4. Leave the kiddies at home; shows are geared toward grown-ups. Gates open at 6:30 p.m.; shows start at 8 p.m.

39. Want to learn to ride a unicycle? You’re on your own! The Bicycle Business in Sacramento sells unicycles, but no one can really teach you to ride the thing. Climb on, fall off, climb on, fall off—it’s all about the balance. But once you’ve got it, it’s like riding a bike: You never forget how.

41. Sip a Zen-Tini at Mix Downtown, on the rooftop of the old Firestone Building at 16th and L. Music and dancing start at 9 p.m. Wednesday through Sunday.

43. Pick berries at Patrick’s Berry Farm in Camino. Make sure to snag a jar of Patrick’s jelly before heading home. Our fave: marionberry.

44. Join Habitat for Humanity’s volunteer pool and spend a few summer days sweating it out for the sake of someone else.
45. Watch bats feed on insects at sunset. The Yolo Basin Foundation’s Bat Talk and Walk is a 45-minute indoor presentation followed by a Mexican free-tailed bat viewing at the Yolo Basin Wildlife Area. Dates: July 9, 11 and 24, and Aug. 4, 15 and 19. Donation: $10 for adults. Sign up at yolobasin.org.

46.  Rock out at El Dorado Hills Town Center’s Live on the Boulevard on Thursday nights from 6 to 8 p.m. through Aug. 20. Bands include the Rhythm Riders—playing the music of Johnny Cash and Patsy Cline—on July 23 and Lukas Nelson & the Promise of the Real on Aug. 6.

47. Go back in time during Gold Rush Days in Old Sac on Labor Day weekend (Sept. 4–7). Gold panners, gunslingers and other re-enactors capture the excitement of Sacramento circa 1850.

48. At the Sacramento Zoo’s Ice Cream Safari on July 25, stuff yourself silly with all-you-can-eat Baskin-Robbins ice cream (plus unlimited Coca-Cola drinks) while cruising the zoo grounds. Your $17 ($13 for kids) sugar high supports the animals. Just be sure to wear your fat jeans.

49. Cool off at the Folsom Aquatic Center on Family Picnic and Movie Nights (July 11 and 25, and Aug. 8). From 7 to 8 p.m., you can swim and swish down the waterslide, then watch a recent Hollywood hit on a giant inflatable movie screen.

Dinosaurs at the Zoo