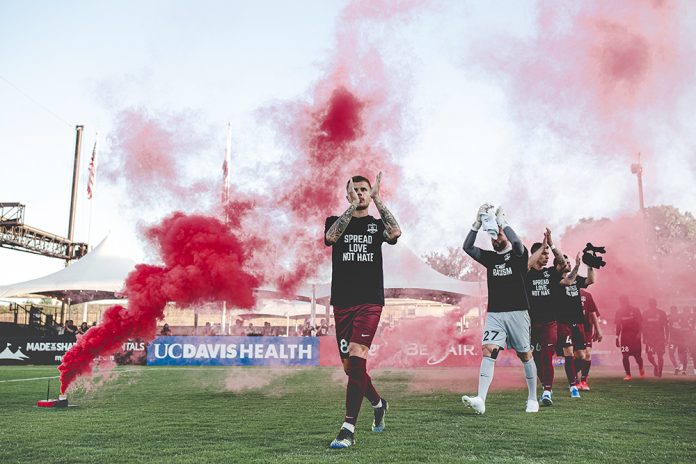 After a rough year with no fans in the stands, Sacramento Republic FC is back in action and thrilled to welcome people into the stadium.

“The ultimate goal is to keep people in their seats because that is the safest,” says Allison Yee-Garcia, vice president of marketing for the team. “I anticipate those restrictions easing as we get through the summer.”

Yee-Garcia adds that the team will continue to do its PRIDE Night, Salute to Veterans and Noche Latina, but the special events will look a little different.

The past year was rough for the team, after its major league expansion bid was accepted by MLS, then put on hiatus after billionaire Ron Burkle dropped his plan to invest. The development also stalled plans to build a new stadium downtown. But fans thirsty for some professional action on the field are excited to cheer on their Republic FC wherever and however they can.

“We have some returning and familiar faces on the team that our fans are excited to see and some new and exciting players, including five of our local homegrown academy players who hopefully will see some minutes this season,” says Yee-Garcia. “Our club has a winning culture, and we have made it to the post-season every season since we started. We are always pushing to keep that streak up.”

In its 21st season, the 2019 Triple A Champion team and San Francisco Giants affiliate is playing ball all summer at Sutter Health Park in West Sacramento. The park returned to full-capacity seating on June 17. rivercats.com

Sacramento hosts its first Ironman Oct. 24. The sold-out event will bring athletes, families and fans to the city, pumping needed funds into the local community. The 112-mile bike course is a fast, flat two-hour loop through the Sacramento Delta’s farmland and wine country; the 2.4-mile river swim and marathon routes are still being developed. ironman.com