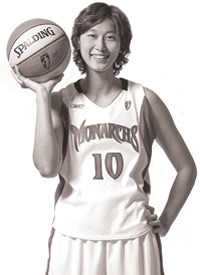 It’s a Wednesday afternoon at Arco Arena, and Sui Feifei is all suited up with no place to go. Although she has dutifully donned her purple-and-white uniform for today’s practice session, Sui also is sporting a left knee contusion/sprain that has put her on injured reserve, meaning she won’t join the rest of her teammates as they leave for a three-game road trip tomorrow.

It’s enough to make anyone unhappy, but for the reigning queen of Asian women’s basketball, it’s more than a minor misfortune; it’s mind-blowing.

“In China, you never sit on the bench, OK?” explains Sharon Qin, Sui’s close friend and representative.
“As a soldier, she would rather die on the court than sit on the bench.”

Being benched is just one of countless cultural conundrums Sui has confronted since coming town earlier this year to compete for a spot on the Sacramento Monarchs’ roster. Although she emerged victorious, signing a season contract with the 13-member WNBA team, life in America is—pardon the pun—a whole new ballgame.

“It’s different here,” admits Sui (pronounced “sway”), who is simply known as “Feifei” (pronounced “fay-fay”) to millions of basketball fans in her native China. (Sui is her last name. In China, it’s customary for the surname to precede the first name.) “But people are teaching me lots of things, both on and off the court.”

Although she doesn’t always understand the interview questions, Sui’s command of the language is sufficient enough to forgo an interpreter, and she’s rapidly building a working vocabulary. When asked what new terms she’s learned lately, she hesitates for a moment and says, “I’ve learned a couple of new things, like ‘holler back’ and ‘peace out.’”

Her cool new lingo comes in handy on American turf, but not so when talking with the folks back home. “When I said ‘peace out’ to my cousin in China, she said, ‘What does that mean?’” says Sui. “I told her, ‘It’s American slang.’”

Coming to the United States to play for the WNBA is the culmination of a lifelong dream for the 26-year-old, 6-foot-1 forward, who bloomed late into basketball at age 14—a surprising fact considering her family tree. Her father, Sui Fuan, is a professional basketball coach in the Shandong province; her mother, Hu Lixia, is a former pro basketball player. While Sui, their only child, showed early promise as an athlete, especially in track, her parents did not encourage her to play basketball, according to Qin. “They pushed her to play piano, study English, to study hard and get into college; that was her parents’ dream,” she says.

“Basketball is hard and competitive, and while they’ve never really come out and said it, I’m not sure they wanted her to do it.” But once Sui—who grew up, ironically, in Sacramento’s sister city of Jinan—got hooked on hoops, there was no turning back. By 1996, she’d made the Chinese national team, staying on for eight years and zooming to fame as a three-time MVP who helped lead her team to four consecutive WCBA (Women’s Chinese Basketball Association) titles.

Sui’s star power in China is huge, but you’d never know it by talking to her. She’s clearly uncomfortable with the U.S. media’s constant comparisons of her to NBA center Yao Ming, who came to the United States three years ago and is now a superstar on two continents. “To be honest with myself,” says Sui, “I tell myself I’m a simple person on the street. I just want to be myself in everything I do.”

In some ways, she says, it’s easier to be here, where she can be more anonymous and has more time to herself. “Here, it’s better; I have a personal life,” says Sui, who, along with Monarchs teammate Miao Lijie, is among the first female Chinese basketball players who have come to play in the United States since the late ’90s, when Zheng Haixia played for the Los Angeles Sparks. The transition for these players, notes Qin, is sheer shellshock. “When you play on the Chinese national team, it’s kind of like sports camp—you eat all meals together, do everything together,” she explains. “The management is totally centralized.” When players come here, Qin continues, they initially don’t enjoy the freedom “because they don’t know how to cook for themselves or what to do with themselves, not to mention the language problem.” But Sui is now getting into the swing of American life, dining in local restaurants and shopping at the Vacaville outlets and Arden Fair mall. “I like shopping for clothes and shoes,” she says. Banana Republic is one of Sui’s favorites, says Qin.

Of course, there’s not really much time for lollygagging when you’re simultaneously adjusting to a new team and a new land. Learning the American way of playing basketball has been a particular challenge, says Sui, who studied Monarchs game tapes prior to trying out with the team. “I watched a lot of tapes, so I learned a lot about how the team plays,” she says. “They play more aggressive here—how do you say, more touch—more physical. Here they play good defense and rebounds. Asian players use a strong offense. It’s a different style.”

American basketball is “the best in the world,” she says. “I think it’s a dream for all of the players in the world to come here.” Playing with the Monarchs is “awesome,” Sui adds, prompting a quick-burst laugh from Rebecca Brutlag, the team’s media relations manager. “That’s the first thing we taught her to say—‘Monarchs are awesome,’” says Brutlag, who also witnessed Sui’s first American lunch: Baby-back ribs at Riverside Clubhouse.

Eating is high on Sui’s priority list, and considering her long, leggy leanness, she can get away with it. “My favorite thing to do is eating,” she says. “In China, when I go out with my friends, we always go out and eat.” Since arriving in the United States, Sui has fallen in love with cheesecake, which she first tried at The Cheesecake Factory in Phoenix. “Mmm . . . I ate two pieces,” she says, her brown eyes gleaming at the memory.

Music is another one of Sui’s loves. “In China, I would shop at the music store every week,” she says. “I like any great music—all the varieties: hip-hop, R&B, everything.” What she doesn’t tell you is that she can sing. “She sings karaoke,” interjects Brutlag. “Only in China,” Sui shoots back.

Sui is more forthcoming about her passion for writing. Even with the new demands of life as a Monarch, she continues to contribute a weekly column, “Feifei’s Diary,” for the China Youth Daily newspaper. “People in China want to know about me and my life here, what playing basketball here is like,” she says. Writing also serves as a counterbalance to the physically rigorous life of a professional athlete. “After team practice, I’m sometimes quiet and don’t want to talk to anyone, so I read books, write or watch TV.” Her television viewing is mostly limited to sports programming; at the time of this interview, she was keeping a close watch on the NBA playoffs. “I watch every day,” she says. “I don’t know all of the people or the teams, but I like to watch.”

More to the point, Sui’s fans love to watch her. When millions of basketball fans in China found out she had made it on to an American team, “it was like a bomb going off,” according to Qin. “The whole country went crazy.”

But fame doesn’t matter a whit to the humble Sui, who concerns herself only with playing well—and playing to win.

“My dream is to bring an WNBA championship ring home, and I believe this team will win a championship,” she says. “I believe that.” And while her parents may have initially wanted another kind of life for Sui, they’re now behind her all the way. “My father says, ‘Work hard and celebrate for me,’” she says. “He’s proud of me.”

On the Chinese team, Sui’s strengths were her high-arcing three-point shot and her ability to nail a basket from a distance. She hopes to build on that now by learning some new American-style tricks from the Monarchs.

“My main goal is just to learn to be a better player, and to play each game better than the last,” she says.
Peace out, Feifei. Peace out.