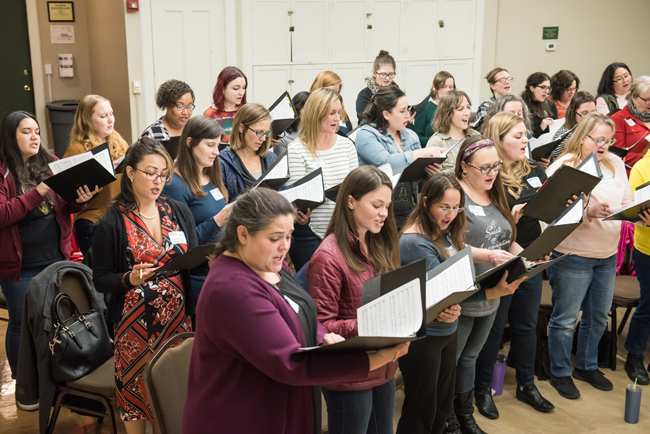 For folks who love to sing but may not feel at home in a traditional choir, Empire Pop Choir could be for you. The group, which was launched in January 2019 by the nonprofit performing arts incubator Empire Arts Collective, is where “we sing fun things with fun people,” says the choir’s managing director Emily Perez.

This unorthodox choir, which was designed around members’ busy lives, meets for three 10-week terms each year. Each term culminates in a public concert featuring songs curated around a theme. Tunes at the show this past November, for example, were all about space, from Elton John’s “Rocket Man” to David Bowie’s “Space Oddity” and more. The theme for the next concert—to be held March 14—is anthems. Think joy, rage, rebellion . . . and songs such as Queen’s “We Will Rock You.”

Why pop music? “This is the music that connects us to each other,” explains Perez. “When we sing these songs at our concerts, the audience really responds to them because everyone has emotional memories attached to them.”

The songs may be not exactly be highbrow—they once performed a fugue based on the “Smelly Cat” song made famous by Lisa Kudrow’s Phoebe character on the television show “Friends”—but they are treated with a sophisticated level of musicianship by the choir’s artistic director Heather Waid, a classically trained musician who arranges most of the pieces.

“Whatever level you’re at as a singer, you will improve in this choir,” says Perez, a classically trained pianist. “We’re always trying to support and challenge our choir to do more.”

Perez bemoans the fact that, outside of church or professional choirs, there are few opportunities for adults to sing with a group. “As a society we really believe that children can learn about music, but we don’t seem to have that same belief around adults learning,” she says. “I really have a passion for helping adults find opportunities to sing because I think it’s really important.”

Empire Pop Choir member Sarah Torres, who has completed three terms with the choir, looks forward to the weekly rehearsals at Sierra 2 Center. For her and many other members, they are a chance to take a break from life’s pressures. “I have two kids and a stressful job, so it’s nice to focus on something else once a week,” she says.

As Perez puts it, “Our goal is that, whatever else happened during the day, when you’re at choir you can be with people in nice environment doing something together that’s beautiful. That’s what choir is truly about.” For more information, visit empireartscollective.com.