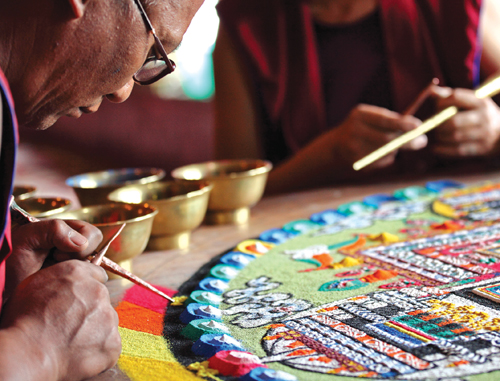 I hurry up the stairs of the Crocker Art Museum’s mansion wing ahead of Cyndi and Victoria, two homeless teens I mentor, eager to show them the mandala exhibit. Every two weeks, I organize outings for these girls through a Sacramento County program for at-risk youth living with their families in government-funded temporary housing. The girls move languidly up the stairs, wishing aloud for an elevator. I hold open one of the Crocker’s 12-foot-tall mahogany doors. Victoria tucks her too-long bangs behind an ear, rubbing her ear cuff like it’s a talisman. The girls breeze past me into the museum, Cyndi’s long blond hair swishing against her rain jacket.

For three days, Tibetan Buddhist monks have been creating a mandala: an intricate symbolic pattern that represents the world in divine form. We have arrived in time to see the monks drop the final grains of sand into the sacred art. During this afternoon’s closing ceremony, the monks will pray over the completed mandala, then destroy it, sweeping millions of colored grains into a pile, which will eventually be tossed into the Sacramento River, the destruction a reminder that everything is temporary. Status, beauty, finances, emotions—even this moment—is in flux.

I had convinced myself that if Cyndi and Victoria witnessed the creation and subsequent destruction of a sand mandala, they would see that they have the power to reassemble themselves. Learning that the monks will move on to a new city to construct another mandala might seed the girls with resilience. I wanted them to discover how to use their creative energy to grow past trauma and into the power to shape their own lives. Despite how difficult their young lives had been, I wanted them to understand they could, eventually, thrive.

In the museum’s Grand Ballroom, four Tibetan Buddhist monks in saffron robes are bending over a waist-high platform bearing the brilliantly colored mandala. Cyndi and Victoria push past me for a closer look. The monks use a pointed metal instrument—like a soda straw with a fountain pen nib—to gently drop colored sand into the interlinked geometric design. Folding tables are set at the perimeter of the room, displaying placards with stories about the lives of the monks and the painful history of the Tibetan people.

There are pictures of water buffalo at work in fields and of the young Buddha in meditation. On other tables, cheap jewelry and bright scarves are for sale. An elderly monk sits at the back of the room, mumbling quick blessings over people’s purchases.

I strike up a conversation with a man who introduces himself as a member of the team that brought the monks to Sacramento. The girls stand at my side and he introduces us to a blond-haired, blue-eyed American man who is an ordained Tibetan Buddhist monk. I introduce the American monk to Cyndi and Victoria, telling him they are both 14 years old and that this is their first experience seeing a mandala. I do not add that they are homeless.

The organizer is called away. The American monk turns to us, smiling brightly.

“You are just old enough to enter a convent and become nuns!” he says to the girls. “We’ll shave your heads, give you new, very plain clothes and you can live in the convent for the rest of your life.”

Cyndi and Victoria step close to me, pressing against my arms like bookends. “Would you like that?” the American monk asks.

Neither girl responds. Cyndi rocks back and forth. Victoria gnaws her thumbnail.

His words land like a lead yoke on Cyndi and Victoria. Eyes lowered, they move their heads from side to side in a slow-motion “No.” Victoria presses harder against my left arm, pinning it to my side. I can feel her desire to bolt, and the fear that traps her in place.

I sweep the teens away, my mind rattling. I had hoped that this outing would be healing.

Between them, Cyndi and Victoria have endured the heartache of being shuttled back and forth through relatives and the court system because their caregivers were too strung out to provide care; they lived in trash-filled rooms, eating rotten food or going without for days. They have seen family members beaten, prostituted, shot and living in urine- and feces-contaminated crack houses. Between them, Cyndi and Victoria have dropped in and out of seven different schools, been beaten by a gang of girls and sexually assaulted by older boys. They know the nature of suffering. “Let’s go,” Cyndi whispers.

“One sec,” I say, my arms still wrapped around her and Victoria. From the corner of my eye, I see a table display of better quality jewelry. I know now that the girls’ suffering can’t be swept away like a Buddhist sand painting, but I’m determined to end the experience pleasurably.

At a table in the back, I purchase two attractive bracelets for the girls—white beads carved into lotus flowers and strung on an elastic cord. “From the mud, the lotus blooms,” my Zen Buddhist meditation teacher would say when I struggled to face my own painful childhood memories.

With the girls in tow, I head for the elderly monk in the corner who does not speak English. He solemnly blesses the jewelry, lingering a little over the beads.

I slide a bracelet over each girl’s hand. Victoria rubs her fingertips over the beads approvingly. “Do we get to keep these?”