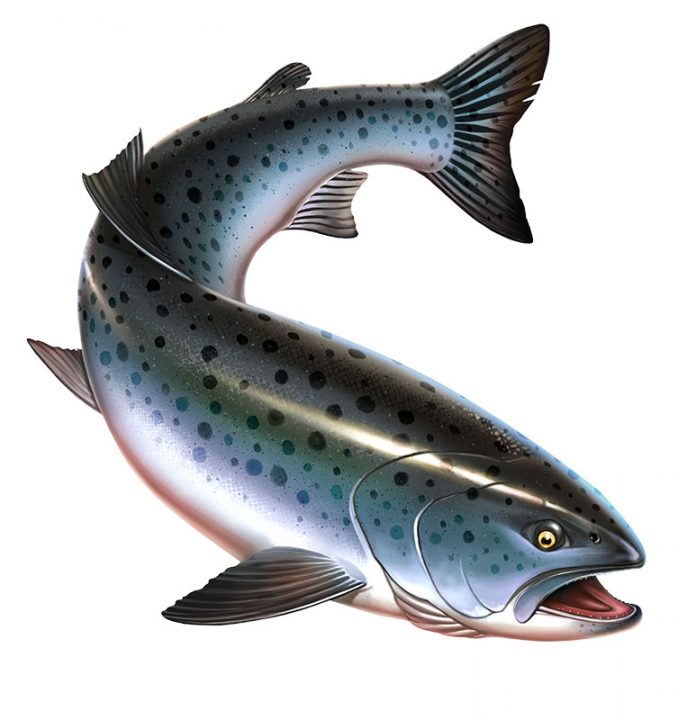 At the edge of the American River, the dorsal fins of tired Chinook salmon breach the surface as the fish tread the slow currents. They’ve performed their last act: the return to the streams used by their parents to lay and fertilize their pea-sized, orange eggs. These kings—the largest of the Pacific salmon—have nowhere left to go. They’ll soon join the bony skeletons of their kin beneath the water or those scattered upon the river’s bank, a feast for turkey vultures, bald eagles and the surrounding trees—just as their young, called alevin, hatch in gravel beds and begin the life cycle again.

Local ichthyologist and UC Davis Ph.D. candidate Ken Zillig introduces us to the fascinating world of the kings of our watershed.

They’re anadromous. That means Chinook salmon can live in freshwater and saltwater. They hatch in freshwater rivers, creeks and streams, but within the first year of life, most will make their way to the Pacific Ocean. Here they spend two to five years—the majority of their lives—bulking up before they return to their natal stream to spawn and die, depositing loads of ocean-rich nutrients into our local ecosystem.

Magnetic fields and smell make an effective road map home. Salmon use the Earth’s magnetic field to identify which river mouth leads to their natal spawning grounds, says Zillig. From there, they use their highly developed sense of smell to sniff out the way home. “Each river has its own chemical smell. It’s sort of like a lock and a key, and there’s a very precise match . . . and they’re looking for that.”

Talk about laser focused. When salmon begin their upstream migration from the ocean, they have one thing in mind: Get home to spawn. Once the journey begins, they stop eating, going without food for up to six months, and their immune system shuts off, which is why many are in poor physical condition when they arrive to spawn. “Spawning takes a lot of energy, and they’re trying to maximize their reproductive potential, so they will start cutting out parts of their energy budget,” says Zillig.

Their body parts morph. Salmon undergo morphological changes that benefit their environmental and life cycle conditions. Zillig says when they enter the ocean their eyes become bigger, making them better optical predators of prey such as krill, herring and squid. During their migration home, both sexes undergo skeletal changes. Most notable—and widely recognized—is the development of breeding teeth and the kype, the elongated, hooked lower jaw, of males. These function as a form of dominance and are displayed to attract and compete for females.

Salmon make nests, too. A salmon’s nest is called a redd. The right-sized gravel—averaging the size of a golf ball to a softball—and good water flow create the ideal conditions to oxygenate and protect the thousands of eggs females deposit in depressions they dig in the river’s gravel bed.

It’s a hard road home. Much of salmon’s historical freshwater habitat has been cut off by dams built throughout California to generate hydropower, irrigate agriculture and accommodate urbanization. Suitable habitat and spawning grounds are further restricted by landscape alterations, pollution, recreation and climate-induced drought that causes low water flow and warmer water temperatures.

Within the American River, research led by ichthyologist Ronald M. Yoshiyama found only 28 of 161 historical miles traveled by salmon remain. Today, all four local salmon runs are species of high concern, threatened or endangered. To learn more about Chinook salmon and how to help protect them, visit caltrout.org.