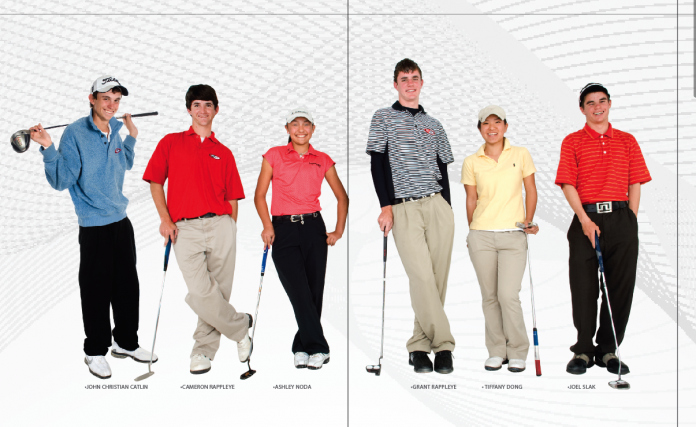 With indexes in the plus zone, these six young Phenoms have a bright future in golf.

Some names just sound like they have star power, or at least future star power. Consider John Christian Catlin, as nice an arrangement of vowels and consonants as there is. In golf, star power at any level&emdash;amateur or pro&emdash;starts with low scores, produced consistently. Catlin already has shot a 64 at Del Paso (from the conquistador tees). He has played in three American Junior Golf Association events, which draw top nationwide talent, and has two top-10s to show for it. The Jesuit High School junior sports a 3.85 GPA and a +3.2 golf index, and he was a second-team All-Metro selection last year.

Aiming for the stars, Catlin says one of his goals is to someday beat Tiger Woods, just to say I’ve beaten him one time. Of course, Catlin acknowledges that he’d be beating his favorite player.

Catlin says he has been contacted by about 25 colleges thus far.

Is eighth grade too early to receive your first college recruitment letter? Not if you are Joel Slak and you’ve already posted multiple 66s while playing to a scratch handicap at your home course, all before your 15th birthday. A Folsom High School freshman, Slak was just 7 when his father introduced him to golf. By age 11, he was beating
his father.

Having recently turned 15, Slak boasts a golf rsum that includes shooting a 66 at Mather Golf Course when he was 13 years old. Since then, he has duplicated that score at Empire Ranch in Folsom, his home course, where he regularly can be seen practicing under the tutelage of instructor Brett Taylor.

In 2007, Slak won nine tournaments while playing mostly in The First Tee of Greater Sacramento and Junior Golf Association of Northern California events. He also qualified for and finished 10th in the Optimist International tournament in Florida, and qualified for the Northern California Golf Association Junior Amateur by shooting a 69 at Castle Oaks.

A solid B student, Slak already has received an introductory letter from a Division I school whose recruiters have requested his scores to track his progress. A member of the varsity golf squad at Folsom High, Slak has plans this summer to try to qualify for the U.S. Junior Amateur.

Even the name of her school is reminiscent of golf. Ashley Noda goes to Silverado Middle School in Roseville. She attends the eighth grade but knows the 70s well. Like the iconic music of the decade, this girl’s golf game rocks. Noda usually shoots in the low to mid 70s and, although she’s only 13, she’s been playing for
a decade.

She shares a trait with Tour star Phil Mickelson, the lefty who’s a righty.  Same for Ashley: She’s right-handed in everything except golf.

A strong student at Silverado, she also schools every day on the golf course. Her schedule includes nine holes a day at Whitney Oaks, with one or two full rounds thrown in on the weekend. She also takes weekly lessons from longtime Woodcreek pro John Klein.

She says the toughest part of the game for her is mental. I’m even-tempered, but there are lots of times when it’s hard, she notes. Things get in your head when you’re not having a great day. It’s difficult to get past the last shot even though I try my best.

With more than six overall wins in The First Tee of Greater Sacramento events in 2007 and victories in her age group in Northern California Golf Association Junior Amateur events, Noda certainly enjoys mostly good days. Keep an eye on Ashley Noda&emdash;there are even more good days to come.

Not since the Sutherlands have two brothers so close in age, with game, arrived on the Sacramento golf landscape. Grant and Cameron Rappleye represent a golfing tandem. (They’re triplets. Brother Trevor prefers video production to golf.)

Seniors at Christian Brothers High School, Grant and Cameron are hoping to find a college golf program to enter as a twosome. With swings and game refined beyond their years&emdash;with courtesy to their instructor, Dave Bingham of Valley Hi Country Club&emdash;Grant plays to a +1.3 handicap, while Cameron sports a +2.

Both brothers have qualified through The First Tee of Greater Sacramento to make appearances in the Wal-Mart First Tee Open event held at Pebble Beach. Grant has played the event twice, being paired with Leonard Thompson and noted short game guru Tom Jenkins. Grant says it was exciting just hitting balls next to the Tour players.

Cameron has made three appearances at The First Tee Open. He recalls the encouragement first-year playing partner Mark Johnson gave him. Before every shot, Cameron says, he told me where to hit it and then he’d say, â€˜You’re the best.’ Of veteran pro Bruce Summerhays, his second-year pairing, Cameron remembers marveling at his short game. I hit it by him, but he beat me by 15 strokes.

These are two brothers who don’t often lose to anyone by 15 strokes.

Even though she can’t vote, Tiffany Dong watches presidential debates, saying, I want to see what they promise before I can vote, because I will be able to vote when they run again. The St. Francis High School junior views her golf game much the same way. Golf teaches me, sort of like a life-guiding skill as a person&emdash;not as a student.

When asked about her handicap index, she shrugs and says, Probably about a +1.7, adding, I don’t look at it as a way to measure my success. I go out, play my game, do the best I can, and I’m hopeful that with lower scores my handicap will
go down.

A member of the powerhouse St. Francis golf squad, she’s already had much success in First Tee events and Northern California Golf Association events. She even won an American Junior Golf Association tournament in Tacoma.

Just like the Rappleye brothers, Tiffany takes lessons under the tutelage of Dave Bingham at Valley Hi. He has this sort of confidence he instills in you, she says.

If she chooses to play college golf (more than a dozen colleges are already interested), consider her confidence instilled. â€¢