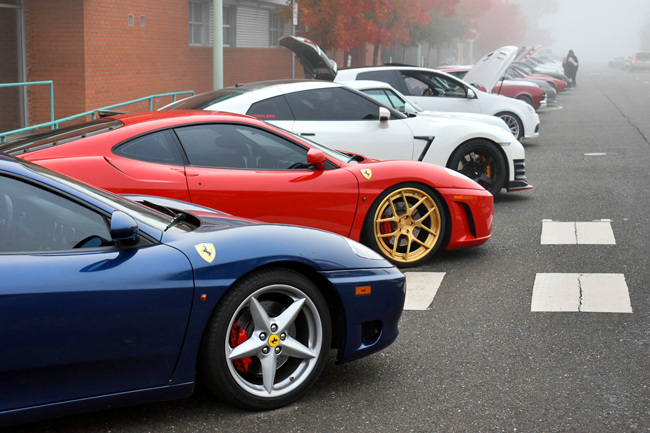 On any given weekend, you’ll find them congregating in the parking lots of doughnut shops, burger drive-throughs and Denny’s restaurants. They rumble through public parks and rev their engines on the narrow streets of industrial neighborhoods. They are Sacramento’s car enthusiasts, and whether they sport an eye-popping Bugatti or a road-weary Fiat, they find fellowship through a love of automobiles.

Take Kelly Lane, who on a crisp Sunday morning in November was outside Luxury Motorcars in Sacramento photographing shiny European sports cars at a monthly meet-up called EuroSunday, which, along with other informal car clubs such as Cars and Coffee and Dreams and Drivers, attracts car lovers from across the region.

“I grew up in Indianapolis, so racing was always kind of in the family,” says Lane, who lives in Sacramento. “My dad wasn’t into cars, but we always watched or listened to the Indy 500, so I’ve always liked cars.”

The first cherished automobile Lane owned was a red 1964 Triumph TR4. “I paid 800 bucks for it. I wish I still had it.” He’s also driven Porsches and BMWs, but these days he can be found behind the wheel of a modest Toyota. “I have three children and four college degrees to pay for, so that’s where my resources go,” he says, smiling.

Lane visits 20 to 30 car shows a year, from low-key local gatherings to esteemed events like Monterey Car Week. “When I went to Germany, I went to the Porsche museum and the BMW museum and the Mercedes museum,” he says. “My wife just can’t understand it.” For Lane, the beauty of the design is the appeal. “I like photographing the details on Ferraris or Aston Martins. I’m drawn to it visually.”

For EuroSunday attendee Colby Sandman of Elk Grove, car clubs are about the camaraderie of fellow enthusiasts, regardless of what marque they drive. “Collecting cars like this, most people think that you’re somebody who thinks they’re better than everybody else, but you don’t get that here,” he explains from the seat of his Ferrari. “People just appreciate the car for what it is, whether they’re driving an old Volkswagen Golf and they’re just really into cars, or they’re somebody who’s done well and bought an expensive sports car.”

Sandman, the former owner of Luxury Motorcars and founder of a car club that morphed into EuroSunday, has loved automobiles for as long as he can remember. “I had Hot Wheels before I was putting sentences together,” he says. “If somebody gave me a Lego kit that was supposed to be a spaceship, I built a car.”

He purchased his first Ferrari at the tender age of 21. “I really couldn’t afford it but I just had to have it. I had a 911 before that and figured that was the ultimate next step.”

Sandman’s sleek red car may turn lots of heads, but he cautions against making assumptions. “We choose to spend a lot of money on this hobby, but it doesn’t mean we’re snobby,” he says. “Most people who are in this car culture, they want to share with other people who are excited about cars. It’s no different than any other hobby. It’s just fun.”