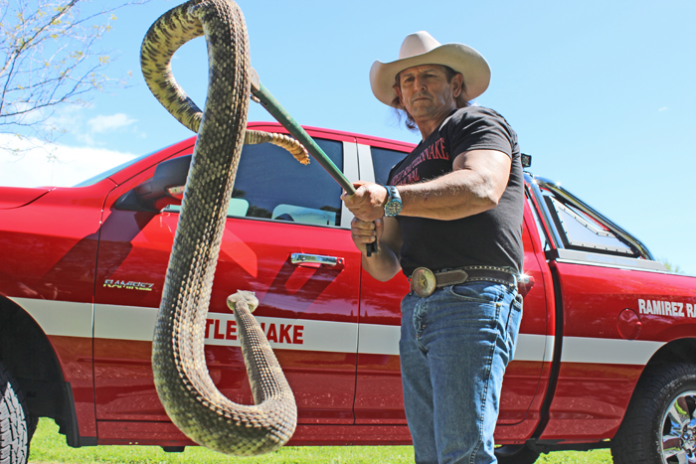 “It’s my job to to protect these animals,” Ramirez says. “It’s also my job to protect people and their pets from them. I love my job, and right now, there’s no shortage of rattlesnakes in this area, so business will always be booming.”

Ramirez started getting calls on a daily basis back in April. “I get calls (from) all up and down the state,” he says. Once the rattlesnakes are removed from the property, they are relocated to a remote, undisturbed area where they can live out their existence, he says.

“(Rattlesnakes) are born in summer and early fall,” he says, “so around June they are very active and likely to end up in areas where humans interact. These include trails, rural property, parks . . . if you see a rattlesnake out there, give it space and do not disturb it,” Ramirez says. “This time of year they are just trying to enjoy the sun like we are, although sometimes they wander where they shouldn’t.”

Ramirez has had a bit of fame. He’s been featured on National Geographic’s “The Animal Extractors” and in the 2001 documentary film “United Snakes of America.” He also starred in Paramount network’s 2009 show “Jesse James Is a Dead Man.” He plans to film a documentary of his own one day soon.

After more than 35 years of wrangling rattlesnakes, Ramirez has only one response when asked if he has ever been bitten by his work: No comment.