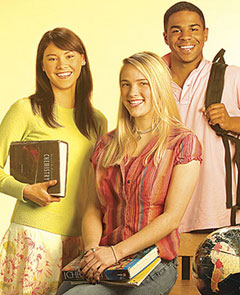 I recall to this day, all too clearly, my first exam a poli-sci midterm at college. A graduate of Loretto, an all-girls parochial school in Sacramento since 1955, I was one of a class of 60 and accustomed to classrooms of about seven to 17 girls. Yet there I was, in Wheeler Hall at the University of California, Berkeley, one of about 700. Picking up the exam and a blue book on the way in, I took a seat near the aisle and, holding my breath, flipped it over. Twelve term identifications, choose six; three essay questions, choose two.

Charles “Red ” Cheever taught (and still teaches) religion at Loretto, but his courses were more often on world religions, philosophy and social justice. For one final, we hermeneutically analyzed The Beatles album Abbey Road. (My friends who attended stuffy Catholic schools back East believe, to this day, that I am making this up. While Beatles-album analysis of any kind may sound hippy-dippy to you, tell me, do you know what hermeneutics is? I do.) Thing is, I wasn’t taking Cheever’s courses as college prep; that’s what all the AP history, honors biology and that horrid, horrid pre-calculus was for. I was taking his courses because they were interesting and fun; because Mr. Cheever was a talented teacher whose love of the subject matter was contagious.

It paid off. In his classes, we dissected the Bible both testaments which gave me a strong base for my English lit study at Cal. We read The Odyssey and The Iliad (another English lit bonus), learned about the situation in El Salvador and my defense of Judas in one class honed rhetoric skills that later made for a great Rhetoric 1B paper. And the Cheever tests proved to have practical benefits. Most of my poli-sci classmates had never seen a test like that in high school. Some didn’t even bother reading the instructions, tried to identify all 12 terms and write all three essays, and ran out of time. Unlike the others, I had seen this test before (in format, if not material) and familiarity was my friend: I aced it. The exam turned out to be worth 50 percent of my grade (the other half was the final). There was no credit for homework, no points for class participation, no subjective benefit of the doubt because you were the type of student all the teachers “loved. ”

In college, it was all about numbers, baby. Your grade on a midterm, if you were lucky, and/or a final at the end. Which is what students who leave high school for college quickly discover and, based on my interviews of area high school grads, are more than a little angry about. Most of the kids interviewed for this story did not feel they were well-prepared for life after high school particularly life at a four-year college or university.

College prep, experts agree, is the No. 1 goal of most area high schools. Sarah Grondin, director of schools and programs for the San Juan Unified School District, chair of the High School Reform Committee and past principal of San Juan High School, says the toughest job teachers of teenagers face is getting their students to realize that the choices they make in school today have huge relevance for their futures. “It’s hard getting the message across to kids that without some post-secondary education, they will be limited in what they will be able to do, ” Grondin says. “We try to get the message across: ÔHow are you going to support yourself on minimum wage, let alone support a family?’ ”

According to the Bureau of Labor Statistics, post-secondary education is “vital ” to getting a good job. Full-time workers with a high school diploma earn an average of $585 a week, while those with a college degree earn nearly twice as much ($1,029). Men with advanced degrees make $2,887 per week or more; women make about half that ($1,997 a week) or more. Personally, professionally, psychologically, physically, the acquisition of a college degree, more than anything else, can determine success in all these areas, experts insist.

The college degree is what the high school degree used to be, says Grondin, but emphatically adds that career exploration is as important to the high school experience as course requirements be they for GED completion or UC admission. “It’s important for kids who are not traditional rote learners to have options, ” she says. “A student who loves animals may discover that, while she doesn’t have the grades or the inclination to spend that much time in school, she could become a very qualified vet tech. ”

Grondin believes that all the high schools in the San Juan school district do a good job of preparing students for post-secondary life. She even points out that the district’s lower-ranking high schools like San Juan and Encina have sent disadvantaged students to some of the top schools in the nation, including MIT and Stanford. “It’s important for everyone involved teachers, parents and especially the students to realize that students who have the drive and want to do the work can attend any school and go on to do quite well in college. ”

Which should serve as some comfort for parents who must send their children to neighborhood schools with discouragingly low Academic Performance Index (API) scores. Those scores, released every March, measure how students at each school in each district score on reading and math proficiency tests. And with public schools that score 10 on the API, like Davis Senior, Rio Americano, Oak Ridge, Union Mine and El Camino Fundamental, why would an area parent spend between $6,000 and $15,000 annually to send a child to a private school? Is the college prep there really that much better? Is the extra attention worth that much more money?

Administrators at the area’s pricey private schools argue it depends on the child some thrive in smaller programs that cater to a student who is more creative or needs more specialization, more challenge. “Students who come here want to be here, ” says Liz Beaven, director of the Waldorf School in Fair Oaks. “They are asking for more and want to be more engaged in their learning process. ”

“We had a student transfer here from Davis Senior High School who couldn’t get over the fact that she could leave her backpack out anywhere on campus, or her locker unlocked, and not worry about something being stolen, ” adds Patricia Fels, an educator at Sacramento’s Country Day School. “Some students really appreciate that about a learning environment; they know their teachers, they know their classmates that well. ” It’s an environment that allows young people to focus on learning at a critical point in their lives: as they prepare for college, says Fels. And as far as the cost is concerned, most private-school representatives insist it’s simply more a matter of choice than sacrifice. “I’m not convinced you can purchase an education, ” says Beaven. “It’s an investment. We can’t and will not quantify it and justify it. Waldorf is a choice and a significant investment of money; only the students can tell you whether or not it is worth it. ”

Fels adds that she has recommended parents with very bright children consider Country Day, only to be told by the parents, “We couldn’t possibly afford it. ”

Our six Super Schools rank “10 ” statewide based on API scores. API Base scores range from 10 to 1; a higher number indicates better performance on the standardized state tests. They rank above state and national averages on SAT scores (Verbal and Math, respectively). The California SAT averages for 2004 were 496 Verbal, 519 Math. The national SAT averages for 2004 were 508 Verbal, 518 Math. For SAT scores, the most recent data available is shown.

API Base scores range from 10 to 1; a higher number indicates better performance on the standardized state tests. For SAT scores, the most recent data available is shown.

Elk Grove Unified’s sixth comprehensive high school opened in August 2002. Its 2004 API score of 743 (up from 656 in 2003) was the highest of the six schools in the Elk Grove Unified School District reported for that year.
API Base score 2005: 778, Statewide rank: 9
Standardized Test Scores: Not available
Highlight: Franklin High School implemented the first Take Your Parents/Guardians to School Day in the district; the school’s commitment to parental involvement sets it apart from other schools in the area.